IDLES are a band in the middle of a dramatic rise to prominence. The Bristol based five-piece have played Brighton on a number of occasions and have very quickly graduated from headlining the Prince Albert, to the Concorde 2, to the Brighton Dome. Given that 14,000 tickets for their current UK tour sold out in ten minutes, I can’t help but think the next time they return will be to the Brighton Centre. If you haven’t come across them yet (you will), their guitar-based music is big and brash and loud, and champions love and respect and unity in the most bold and dynamic way imaginable. To say that there is a buzz of anticipation surrounding tonight’s sold-out show is a considerable understatement. 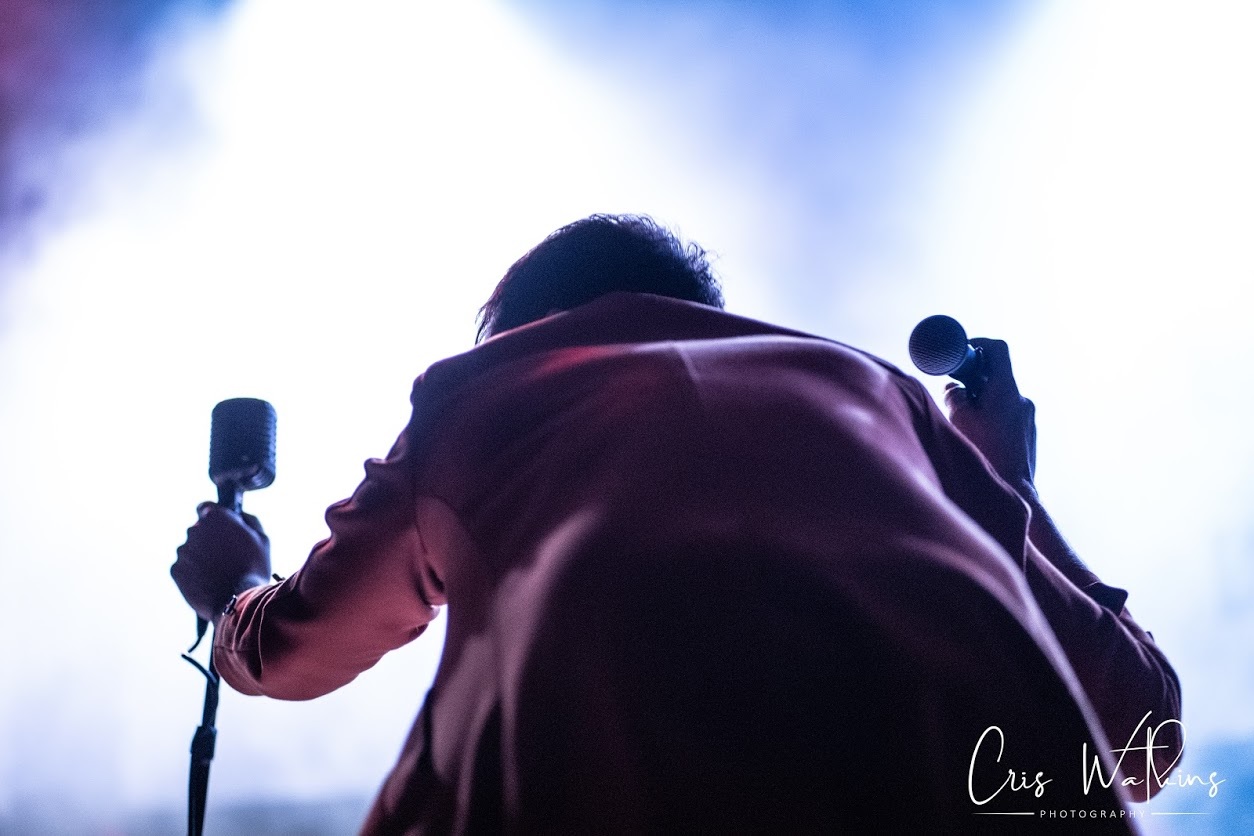 Support comes from North London’s Crows. The hall is still filling up as they hit the stage with the title track of their new album ‘Silver Tongues’. They are rumoured to have recorded the album in darkness to achieve an appropriate vibe, and tonight’s lighting seems to have been designed with that in mind. Downlit from directly above the stage, the band members appear as ghostly silhouettes. Singer James Cox seems to be channeling the late Ian Curtis in a long coat, and there is more than a hint of Joy Division in their dark and brooding soundscapes. 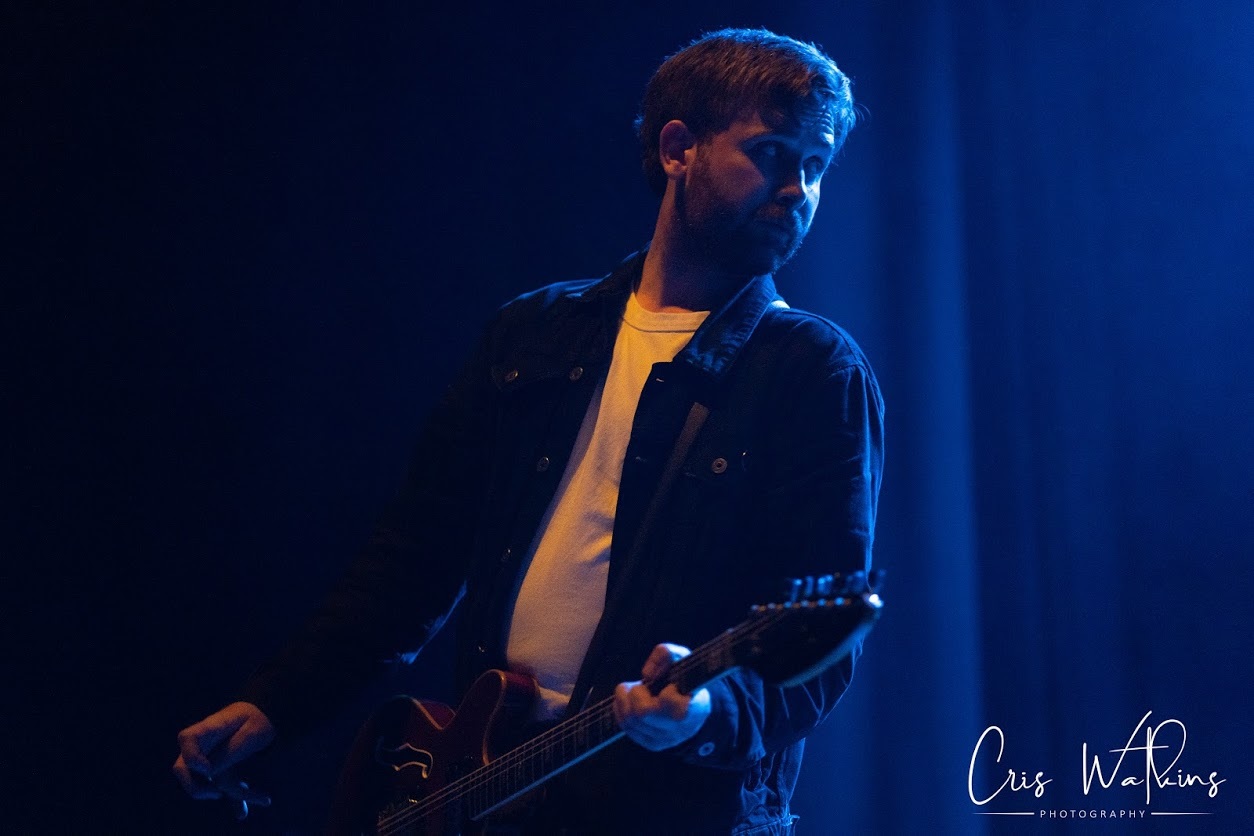 Guitarist Steve Goddard and bassist Jith Amarasinghe flank the stage like shadowy sentinels, while drummer Sam Lister sets about pounding his floor tom into the middle of next week. 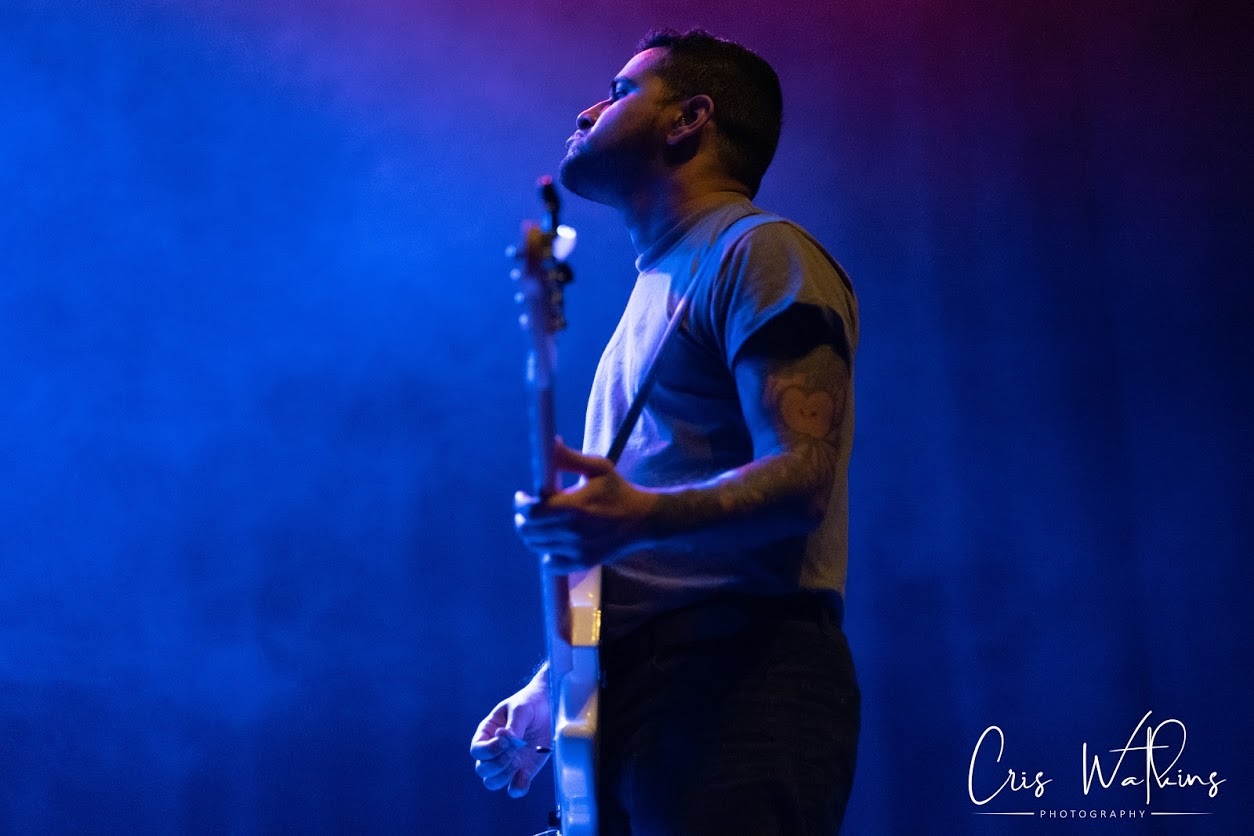 The steadily intense sonic bombardment reminds me at times of Killing Joke. The long coat is quickly discarded as James Cox becomes more animated, and despite screaming vocals draped in a delay that suggests he has fallen down a lift shaft, the crafted quality of the lyrics shines through. He has the habit of grabbing a second mic and singing down both, which works well visually and sonically. 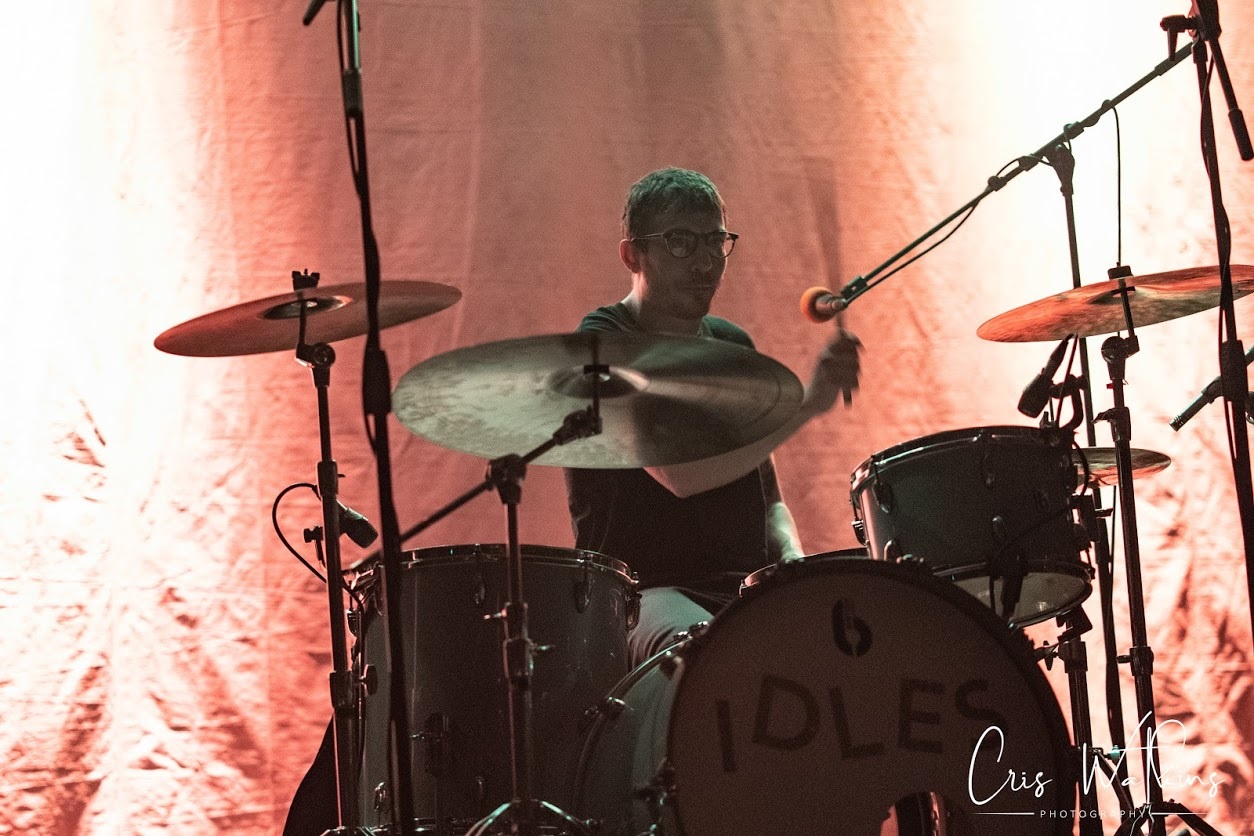 Most of the set comes from the new album, although two older songs, ‘The Itch’ and ‘Whisper’, (from 2016 EPs ‘Cold Comfort’ and ‘Unwelcome Light’ respectively) are impressive too. The album tracks played tonight are all superb: moody and lyrical, and executed with a classic post-punk sensibility. The set is over all too soon, and it makes me want to hurry home and play the record. 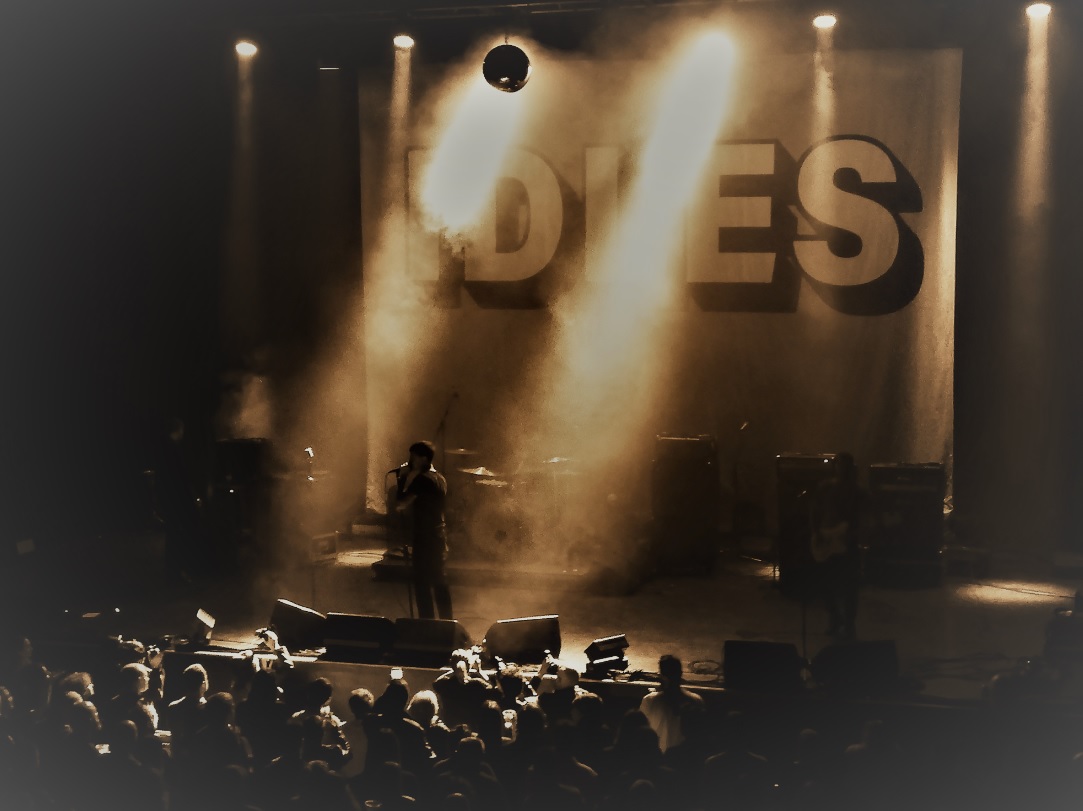 The standing area quickly becomes very full as the crowd gathers in anticipation of the headliners’ set. A huge pink banner with the IDLES logo is draped behind the stage. The lights dim slightly, and the doom-laden clanging introduction to ‘Colossus’ begins shuddering through the hall. 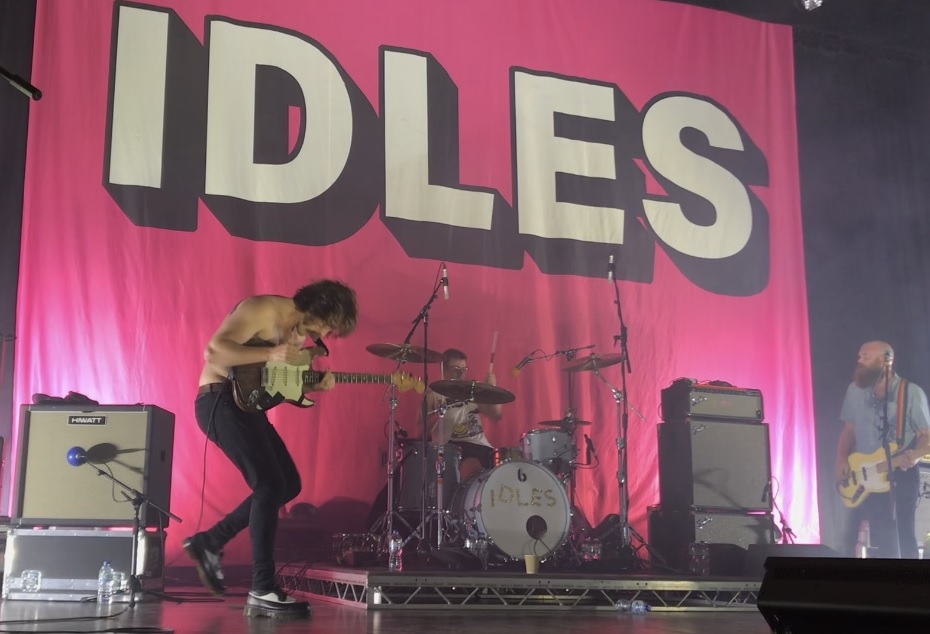 I get the impression that every member of the audience knows every member of the band like they are family, but in case you don’t, I’ll run through the line up. What you do need to understand is that, unlike almost any other band, every member is vigorously animated and going for it throughout the whole set. 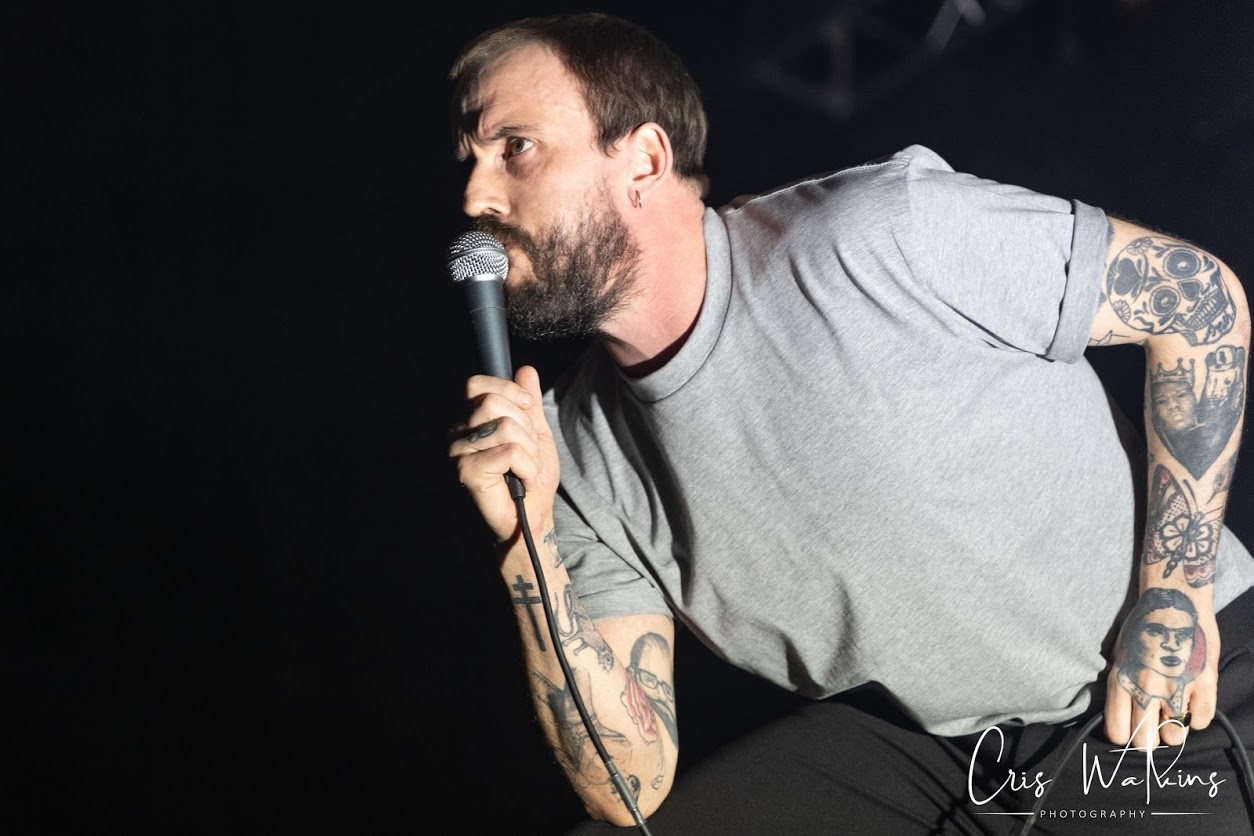 Joe Talbot is on vocals: a massive presence, apparently confrontational but warmly inclusive and concerned for everyone’s well-being. 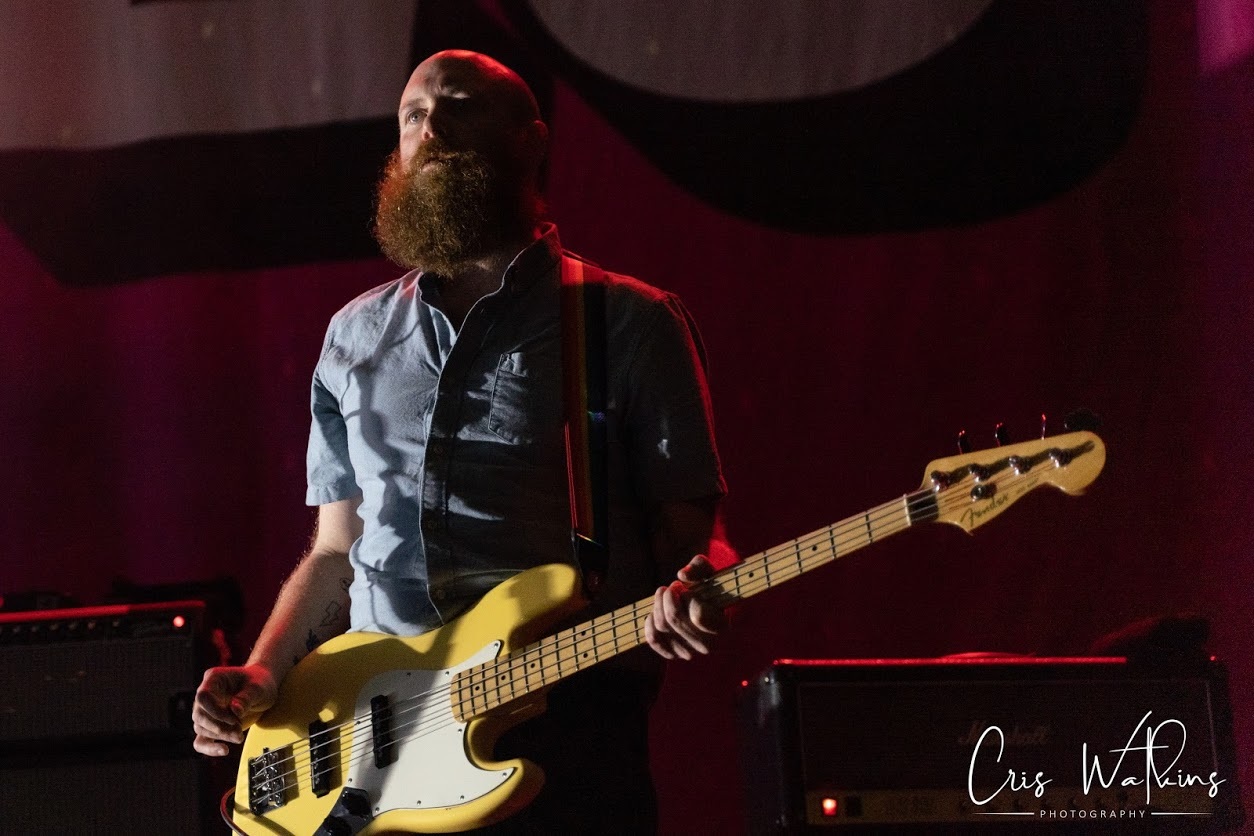 Bassist Adam ‘Dev’ Devonshire has a bald head and massive beard, and dips and sways continuously, his headstock rising and dipping like a fairground swing boat. Guitarist Mark Bowen has a retro style haircut and ‘tash (think Derek Smalls from ‘Spinal Tap’), a trademark bare chest, and mischievously scampers across the stage when he’s not crowd-surfing into the audience. 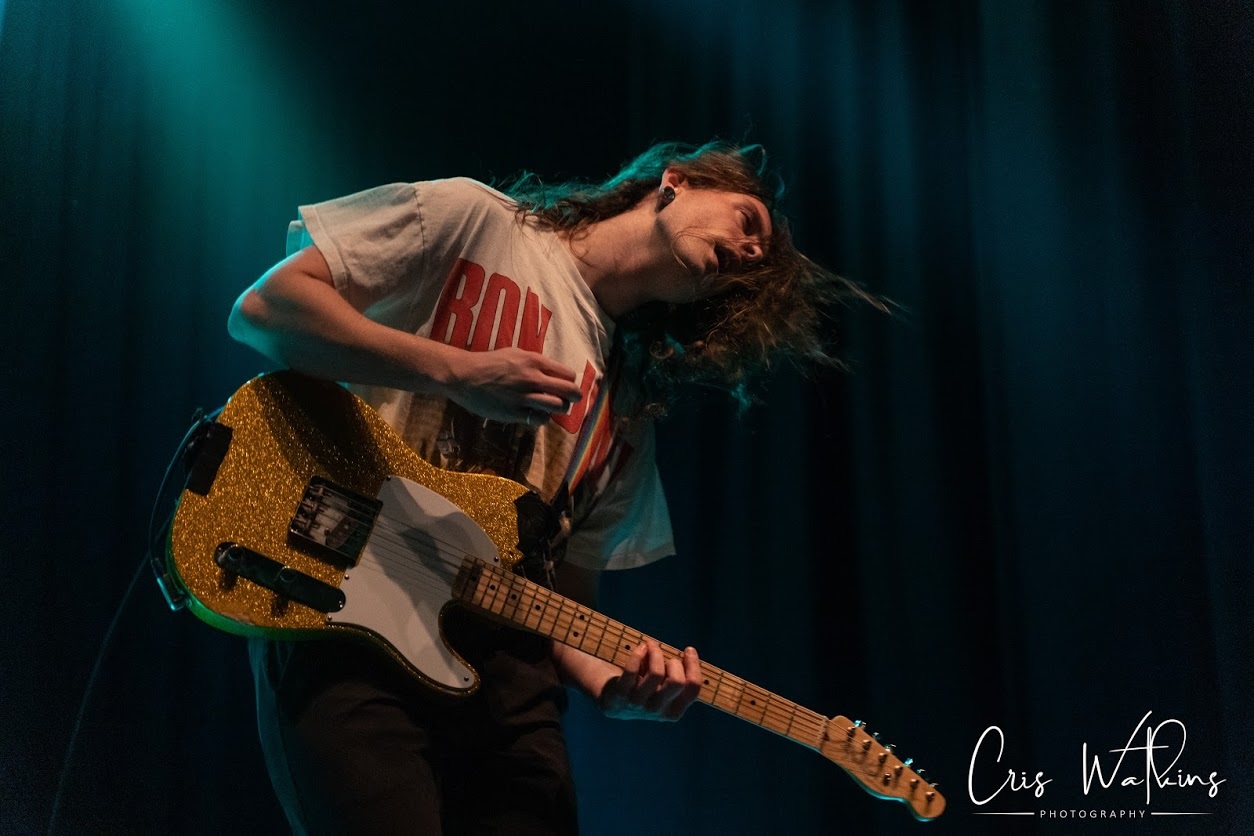 Last but not least is drummer Jon Beavis, referred to as ‘tax man Jon’ by his bandmates, possibly due to his relatively sensible haircut and glasses. His drumming style is manic to say the least, and impressive beyond description. Imagine the bunny toy that advertises a popular brand of alkaline batteries was nuclear powered instead. The opener is followed by the insistent urgency of ‘Well Done’, whose lyrics have provoked a tiny media spat with the more obviously working class band Sleaford Mods. The latter get an impromptu mention in the following number ‘I’m Scum’, which has the whole hall bouncing in unison. 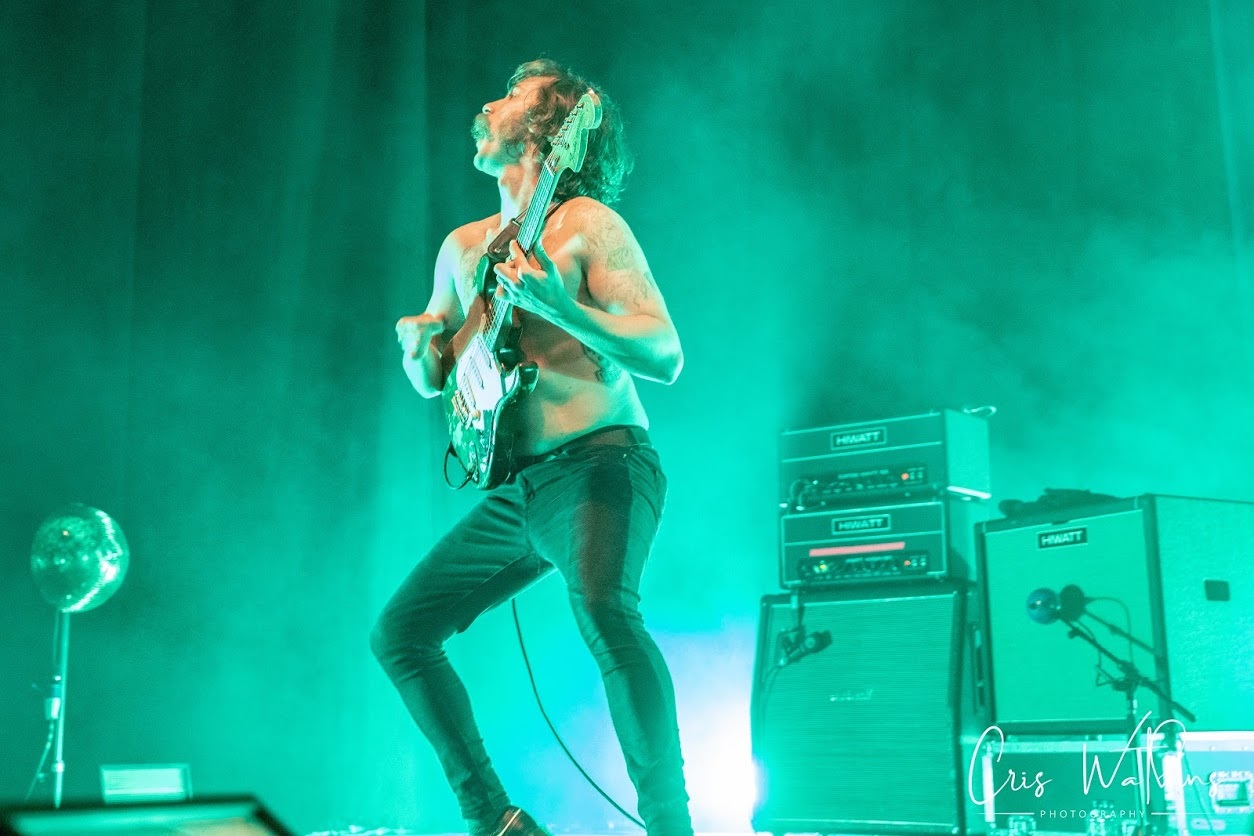 ‘Great’ with its mention of blue passports seems particularly poignant on 29th March, for a long time touted as the date for the United Kingdom leaving the European Union. At the end of the song, Joe says thank you in multiple European languages. “See…I’m learning.” 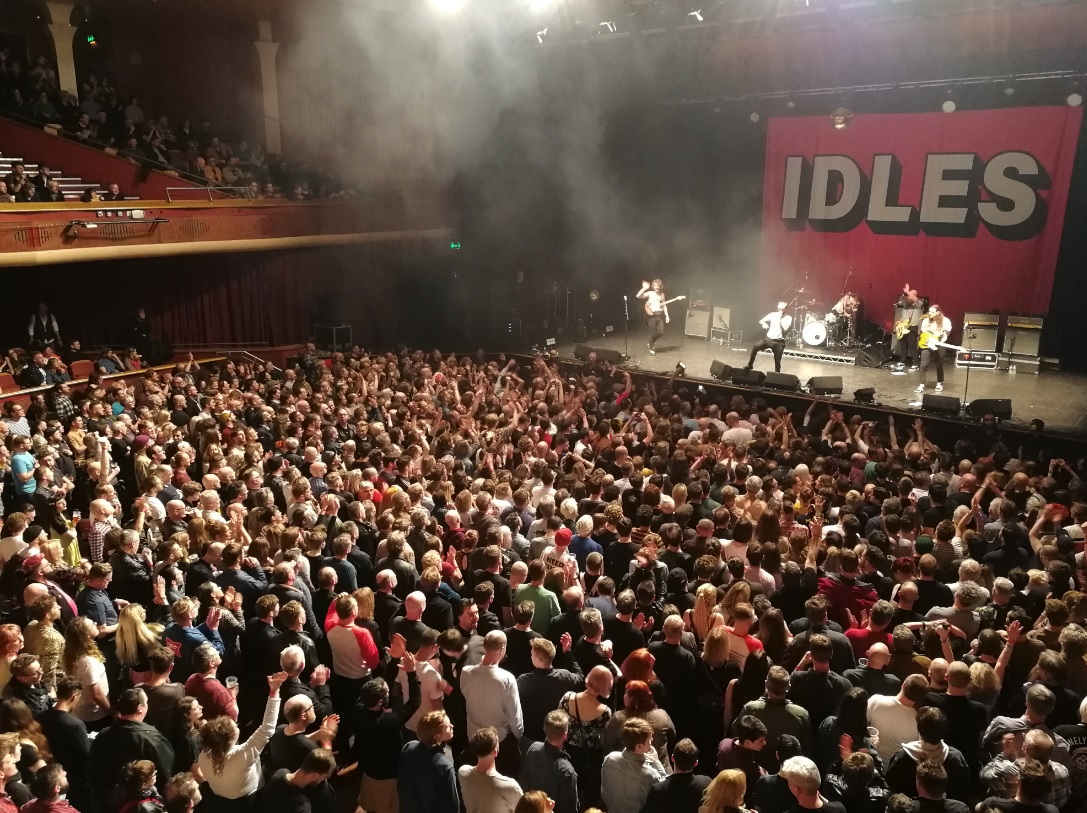 The next song is dedicated to “Every f__ing foreigner in the room”. ‘Danny Nedelko’ is a lyrical and musical triumph, championing unity in an age of division. Guitarist Mark Bowen has disappeared into the crowd, who chant the song so loudly that Joe doesn’t need to sing. Joe just stands there wiggling his hips. 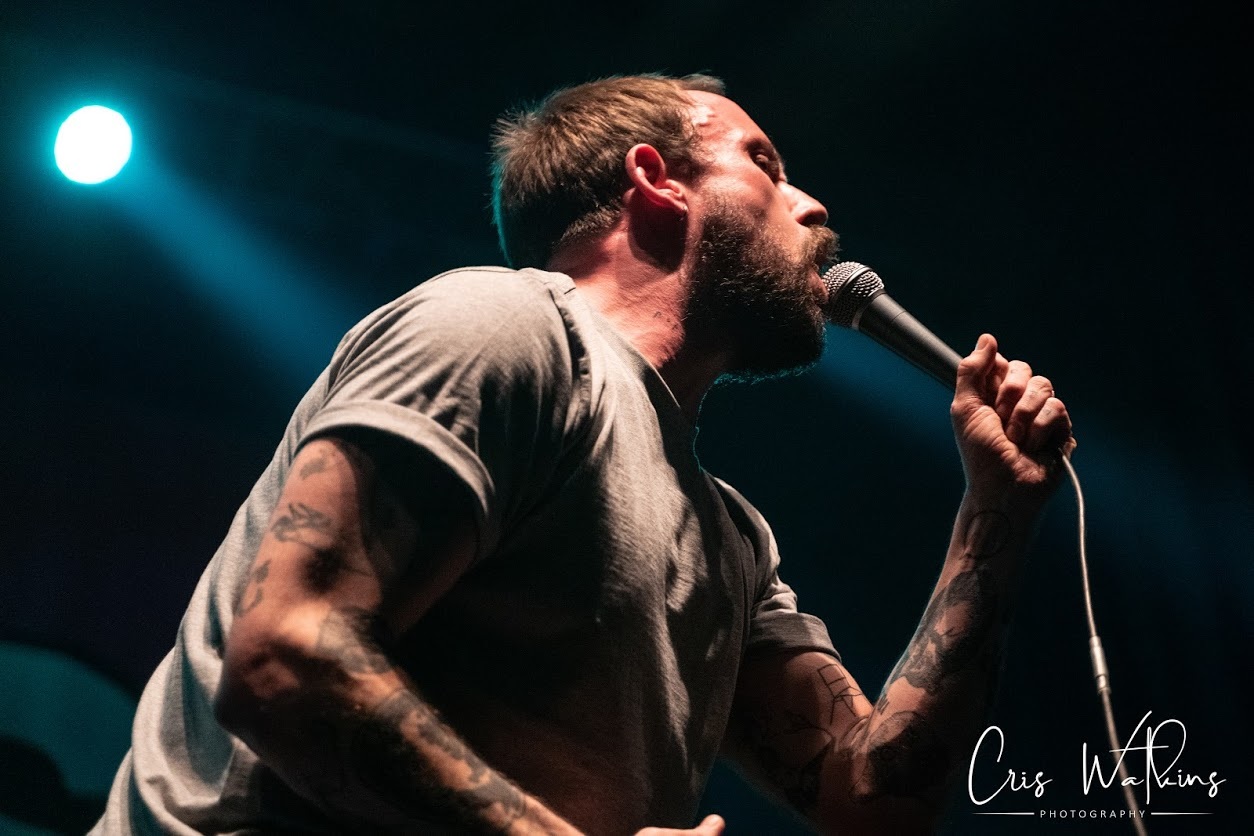 ‘Divide and Conquer’ is dedicated “to the NHS”, and is a supremely heavy track, its message accentuated by a strobing blue light. There is another very touching moment as ‘Love Song’ is dedicated to the band Her’s, whose members and manager sadly passed away in a road traffic accident while touring America. Red spotlights hitting the main mirrorball send showers of light around the hall as guitarist Lee surfs the crowd. 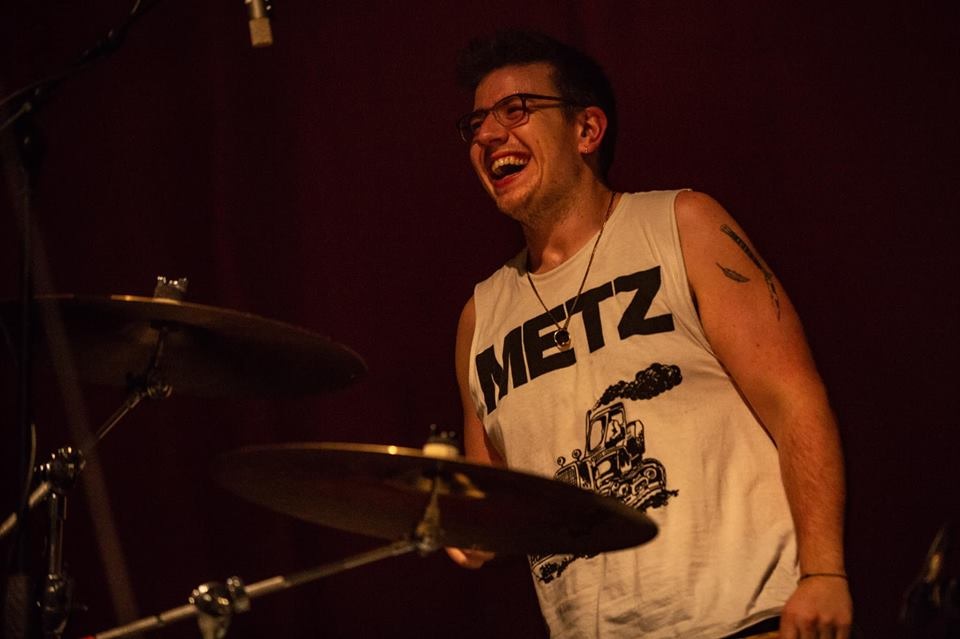 Every song is absolute quality, including my personal favourite, ‘Never Fight A Man With A Perm’. Between the intense seriousness of ‘Faith In The City’ and ‘Benzocaine’ there is a rather charming bit of mucking about, as the band launch into an acapella version of ‘All I Want For Christmas Is You.’ Joe explains that their manager would probably prefer them to be more sensible now they are playing larger venues. “As soon as we get into a theatre sized room it turns into a cabaret” 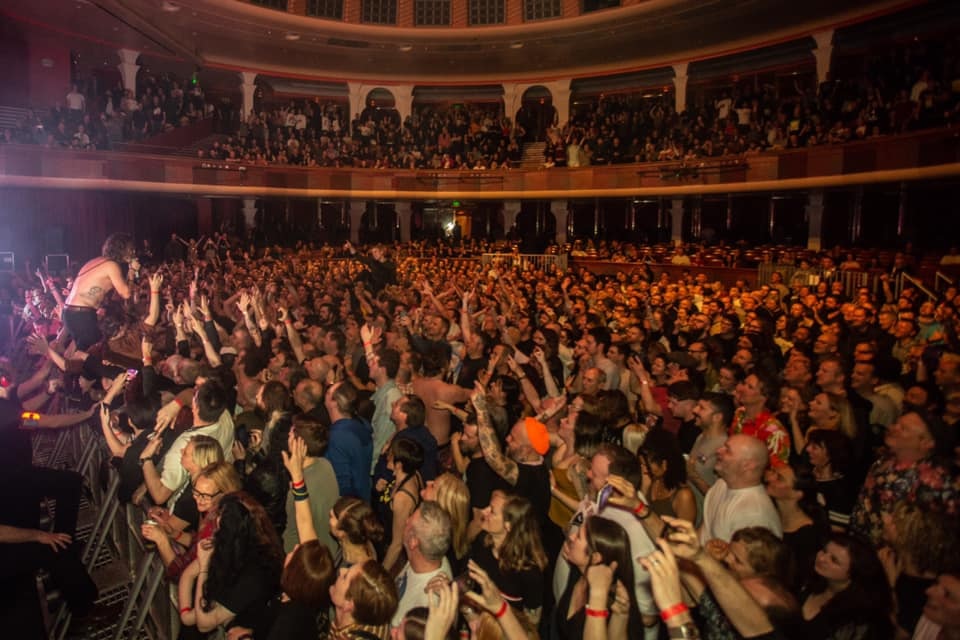 It is hard to imagine a show where there is such warmth and such an all-enveloping feeling of good will as IDLES. “Individually you come here and you make a mass of love,” acknowledges Joe, before launching into the magnificence of ‘Samaritans’. 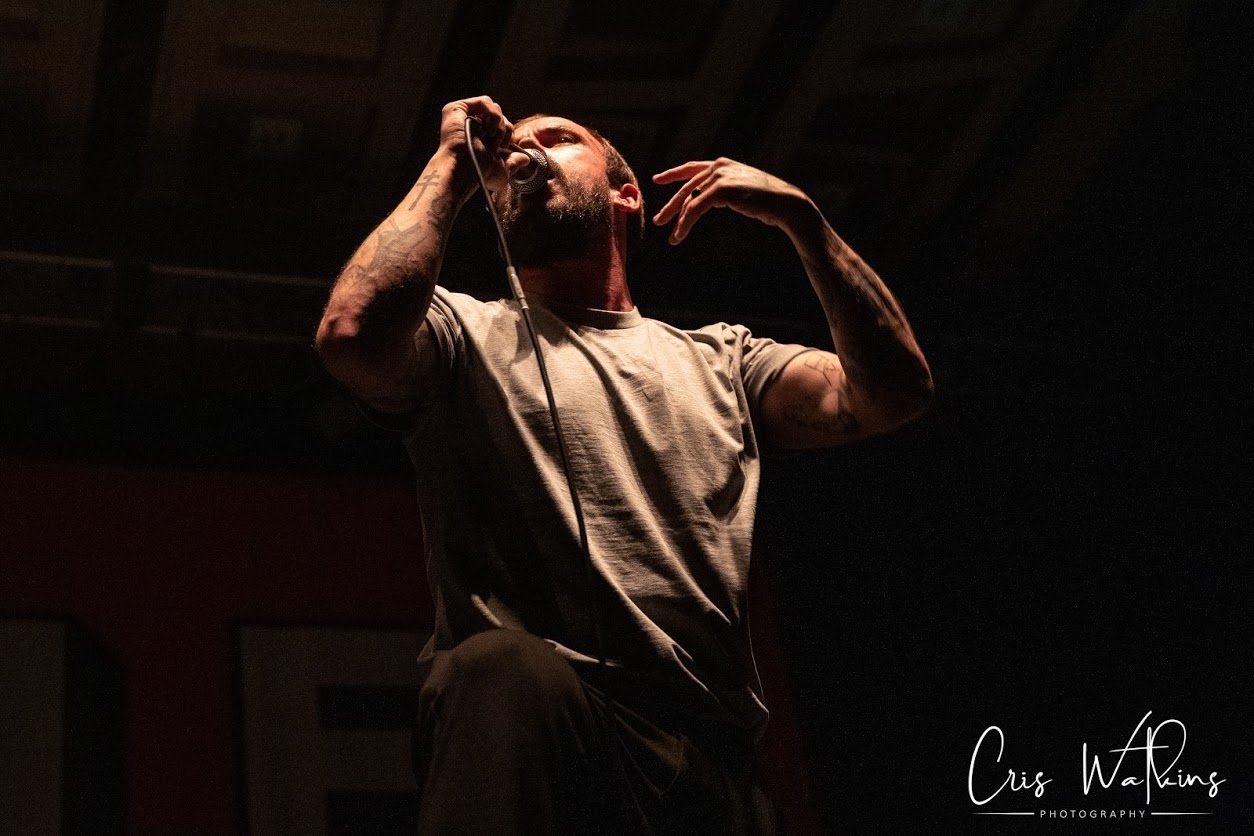 Mark and Lee both make a foray into the crowd for ‘Exeter’, and Joe is choreographing the eager crowd to jump around like animals on his signal. It’s a beautiful and spectacular moment. 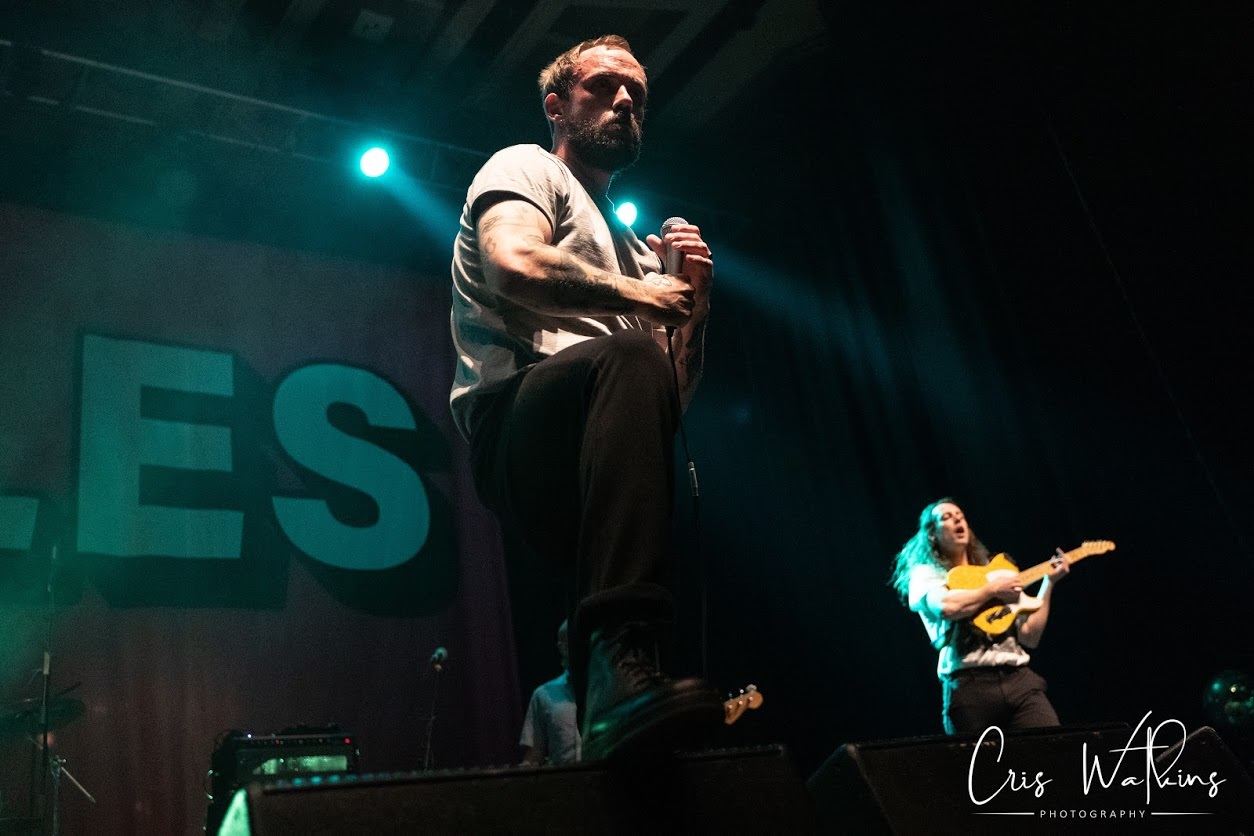 ‘Television’ is a superb invocation to be kind to yourself, and the finale ‘Rottweiler’ is so spectacularly climatic that there is no question of an encore. This was an experience, and the crowd here are left in no doubt that they have experienced it. This was a triumphant show that I felt privileged to be attending. 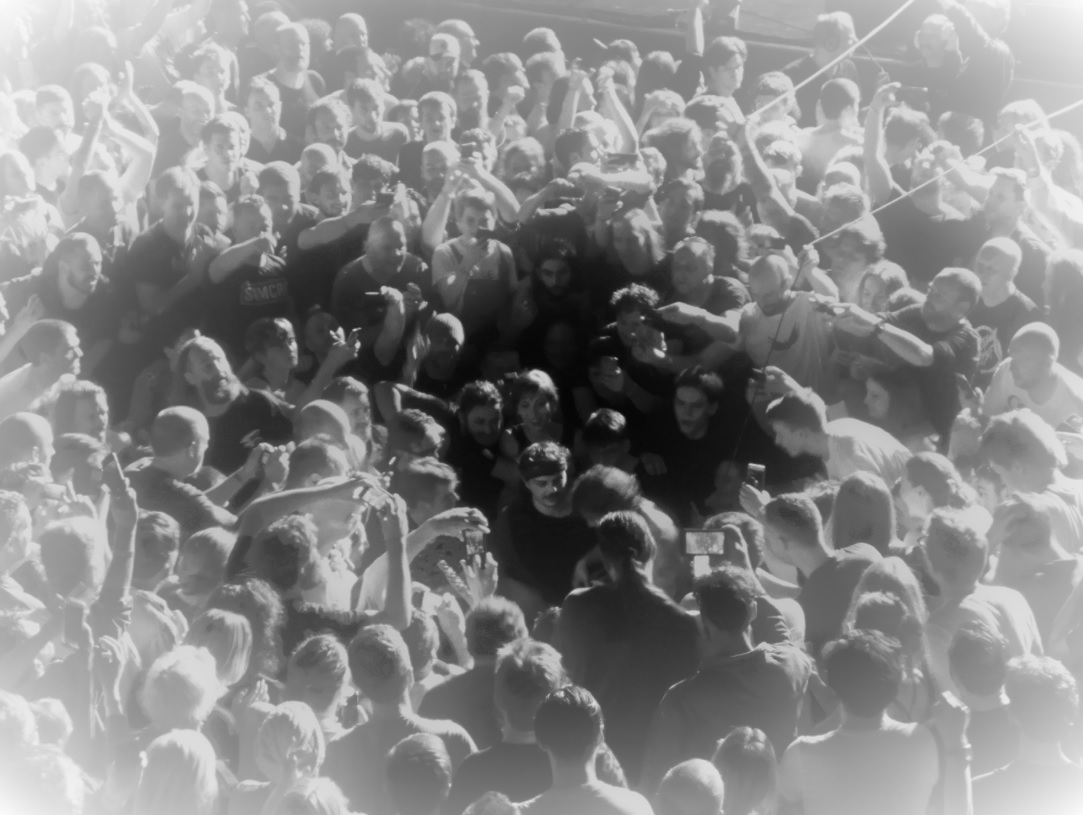 More ‘IDLEising’ from the crowd as Lee and Bobo play ‘Where’s Wally’ at the Brighton Dome 29.03.19 (pic Nick Linazasoro)