Spear Of Destiny’s Brighton concert has moved to The Spire! 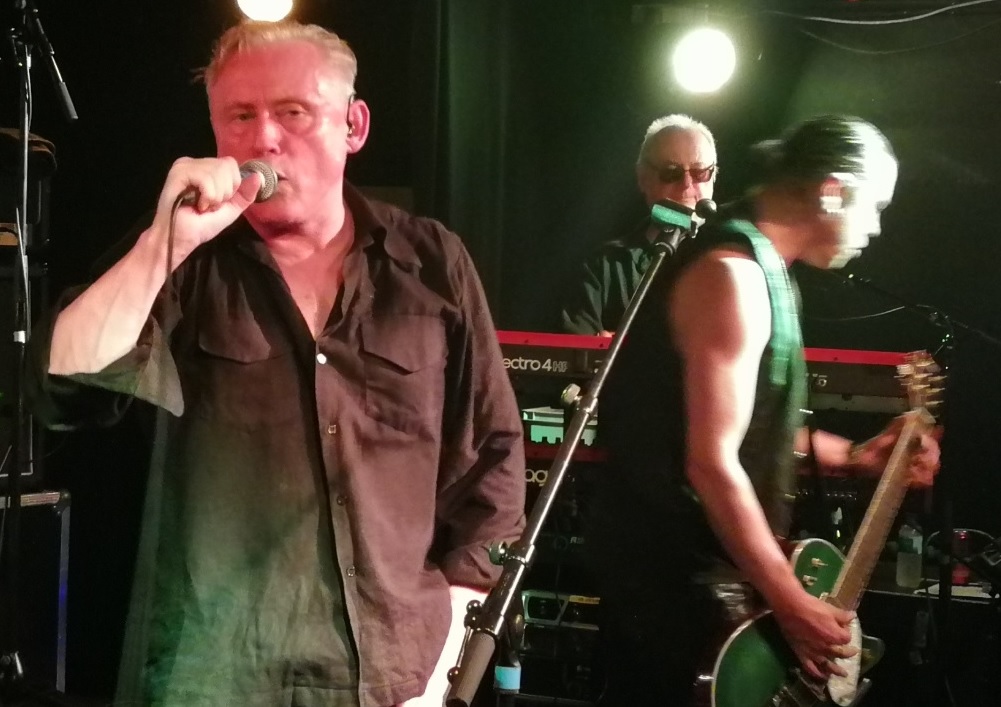 This evening it has been confirmed that the Spear Of Destiny. Friday 27th September 2019 Brighton & Hove concert has been relocated to an impressive new venue!

Initially the performance of their popular second album entitled ‘One Eyed Jacks’ was due to take place outdoors at the 425 capacity amphitheatre style B.O.A.T (Brighton Open Air Theatre) as a 35th anniversary tribute.

The event will now take place inside the expansive awe inspiring grade II listed St. Mark’s Chapel, known as ‘The Spire’. The building took 11 years to construct and was completed in 1849. Chapel doors will be swung open 7pm at the venue located on Eastern Road, Brighton. For those that are unsure as to the exact location of the building, its postcode is BN2 5JN. 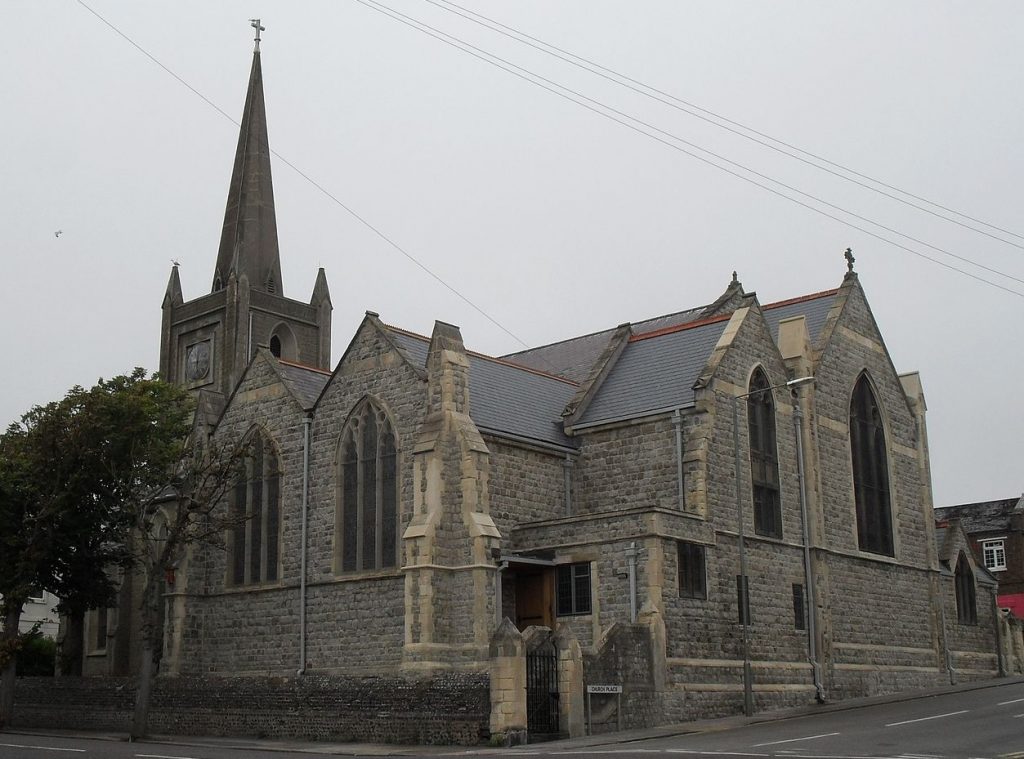 The Spire is a creative space for theatre, dance, circus and performance makers, and is used by both the local community and professional artists to develop new creative projects and is also available for public performances, private events, wedding receptions, exhibitions and launches.

Spear Of Destiny will not only be performing the ten tracks from the 1984 ‘One Eyed Jacks’, album which are: ‘Rainmaker’, ‘Young Men’, ‘Everything You Ever Wanted’, ‘Don’t Turn Away’, ‘Liberator’, ‘Prisoner Of Love’, ‘Playground Of The Rich’, ‘Forbidden Planet’, ‘Attica’, and ‘These Days Are Gone’, but they will also be performing a host of classic Spear Of Destiny songs from the band’s now staggering 15 album/36 year career.

Fronted, as ever, by Kirk Brandon, Spear Of Destiny were formed in 1983 after the demise of Kirk Brandon’s post punk iconic rockers Theatre Of Hate. (Brandon had also, before TOH, been the main man in every punk rockers favourite band of that era The Pack).

The current line up of Spear is the longest serving to date and features Adrian Portas (New Model Army / Sex Gang Children), Craig Adams (Sisters of Mercy / The Cult / The Mission) and Phil Martini (Jim Jones and the Righteous Mind) on drums. Long time Brandon cohort Steve Allan-Jones will be covering the keyboards. On April 6th 2018 Spear Of Destiny released their 14th studio album ‘Tontine’ which is available on CD, Vinyl and Download. 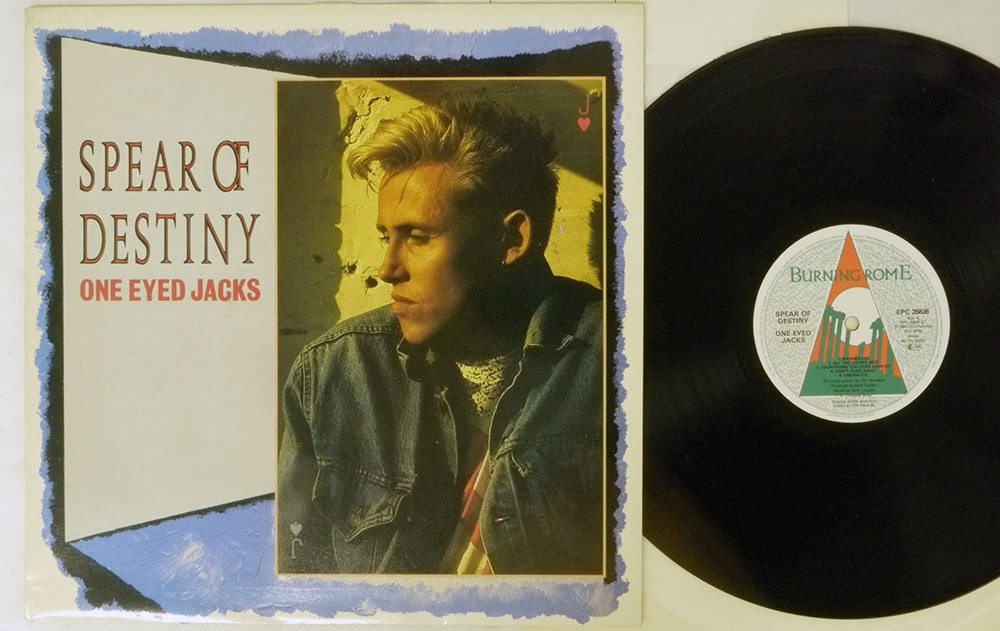 Spear Of Destiny are a highly rated outfit, but don’t just take my word for it. Here are a few comments on Kirk Brandon and Spear of Destiny:

The BBC’s Jeremy Vine says, “@kirkbrandon is one of our greatest musical geniuses”

John Robb’s Louder Than War “Spear of Destiny are criminally underrated and are one of Britain’s best, Boys Own, punch the air, grandiose Rock’n’Roll bands”.

Mojo wrote: “Kirk Brandon is on of the UK’s best kept secrets”.

Louder Than War: “9/10 Brandon puts his all into every song with epic bombast, coming across as a tragic rock n roll anti-hero. He is the Wagner of rock n roll. And the haircut’s still pretty cool”.

Aberdeen Voice: “Thirty one years together makes for flawless instrumentals, a unique sound, and some remarkable riffs and harmonies”.

Support at The Spire will come from DJ Gremlin. 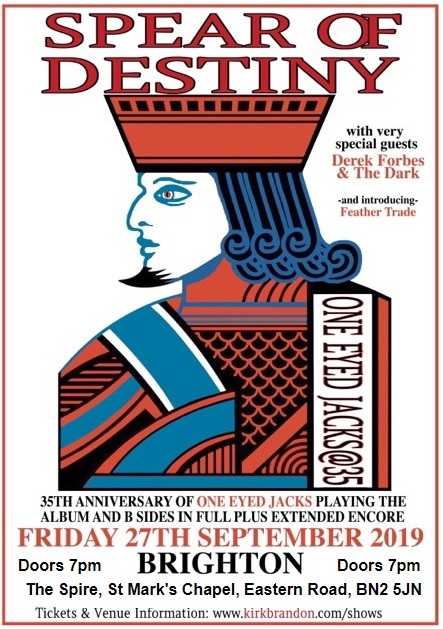