The Brighton Kemptown Conservatives have picked their youngest ever candidate to contest the seat at the next general election. 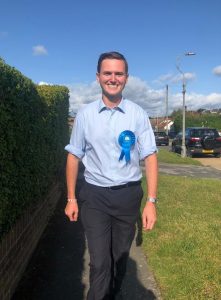 The constituency party has chosen trainee barrister Joe Miller, 25, who is currently a councillor in Brighton and Hove and was until recently the deputy leader of Lewes District Council.

The former Cardinal Newman pupil previously chaired the Audit and Standards Committee on Brighton and Hove City Council after becoming the youngest councillor to have been elected in Brighton at just 20.

The party said: “At a packed special general meeting of Brighton Kemptown and Peacehaven Conservative Association, on Sunday 6 October, Brighton-born Joe Miller was selected as the parliamentary candidate for the Brighton Kemptown Constituency.

“Joe joined the Conservative Party at the age of 17 after the financial crisis as he saw mismanagement of the country’s finances hurt the poorest the most.

“As a result of that Joe got more and more involved in politics and came into contact with great local councillors who really made a difference to their ward residents’ lives and the city as a whole.

“Joe thought he had something to add in both regards and also thought it would be good to have younger representation on the council and especially Conservative young representation and so that is what drove him to stand.”

Mr Miller said after the meeting yesterday: “I am humbled and honoured to have been selected as the Prospective Parliamentary Candidate for the Brighton Kemptown and Peacehaven Conservative Party.

“I look forward to the campaign to unseat the current Labour MP and invite any residents to join my team to help me in this campaign.

“If elected, I will be the strong and loud voice in Westminster that we deserve.

“It would be my honour and my privilege to represent you, the area in which I was born and which I love.

“As such I hope I can count on your support.”

Fellow Rottingdean Coastal councillor Bridget Fishleigh, the only independent on the council, said that she was also contemplating throwing her hat into the ring after encouragement from residents impressed with her performance since being elected in May.

They will take on the sitting Labour MP Lloyd Russell-Moyle and the Green mayor of Brighton and Hove, Alex Phillips, who is also a Member of the European Parliament (MEP).

Buildings evacuated due to gas leak