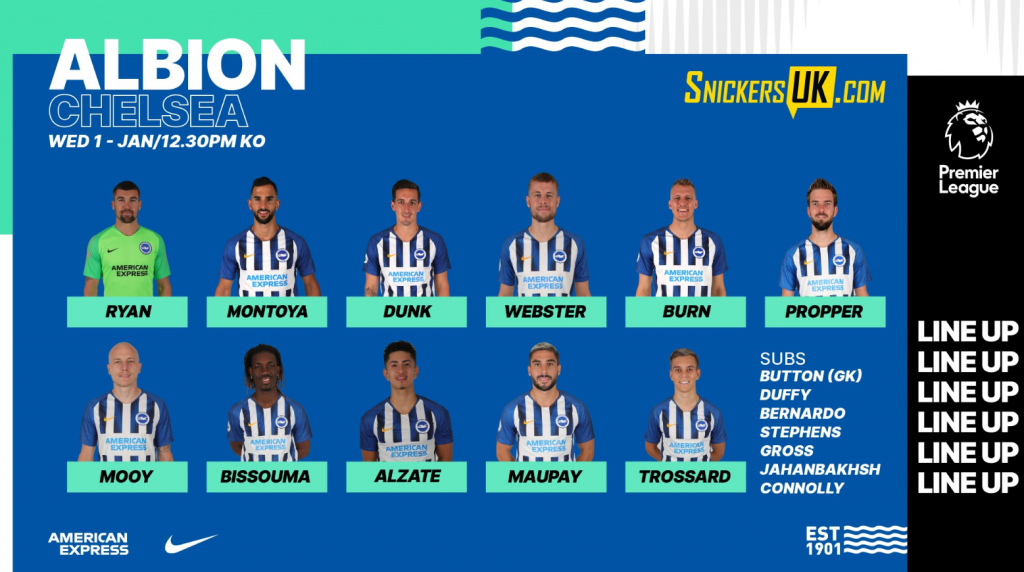 Graham Potter rotates his pack as Steve Alzate and Adam Webster return to the starting line up at the Amex today (Saturday 1 January).

Alireza Jahanbakhsh returns to the bench after scoring the opening goal against Bournemouth at the Falmer stadium in the lunchtime fixture on Saturday (28 December).

And Shane Duffy, who turns 28 today, is also back on the bench for today’s lunchtime kick-off, having started against Bournemouth four days ago.

Brighton’s teenage striker Aaron Connolly returns to the squad, although also as a sub, with no place for Glenn Murray.

Chelsea boss Frank Lampard has made three changes to the side that beat Arsenal 2-1 at the Emirates on Sunday (29 December).

Reece James, Jorghino and Christian Pulisic are all in the starting XI with Emerson Palmieri and Mateo Kovacic dropping to the bench.

The third omission, Fikayo Tomori, is not in the squad at all.

Tomori was just 19 when he spent four months on loan at Brighton from January 2017 during the promotion-winning season that took the Seagulls up to the Premier League.

The defender, who turned 22 just before Christmas, was given a five-year contract by the Blues last month, a week before his birthday.

The Blues won 2-0 when the two sides met at Stamford Bridge in September and have won all nine of their league matches so far against Brighton.

Albion did, though, cause an FA Cup upset in 1933 when they knocked Chelsea out in the 3rd round with a 2-1 win in front of a 23,000 crowd at the Goldstone Ground in Hove.