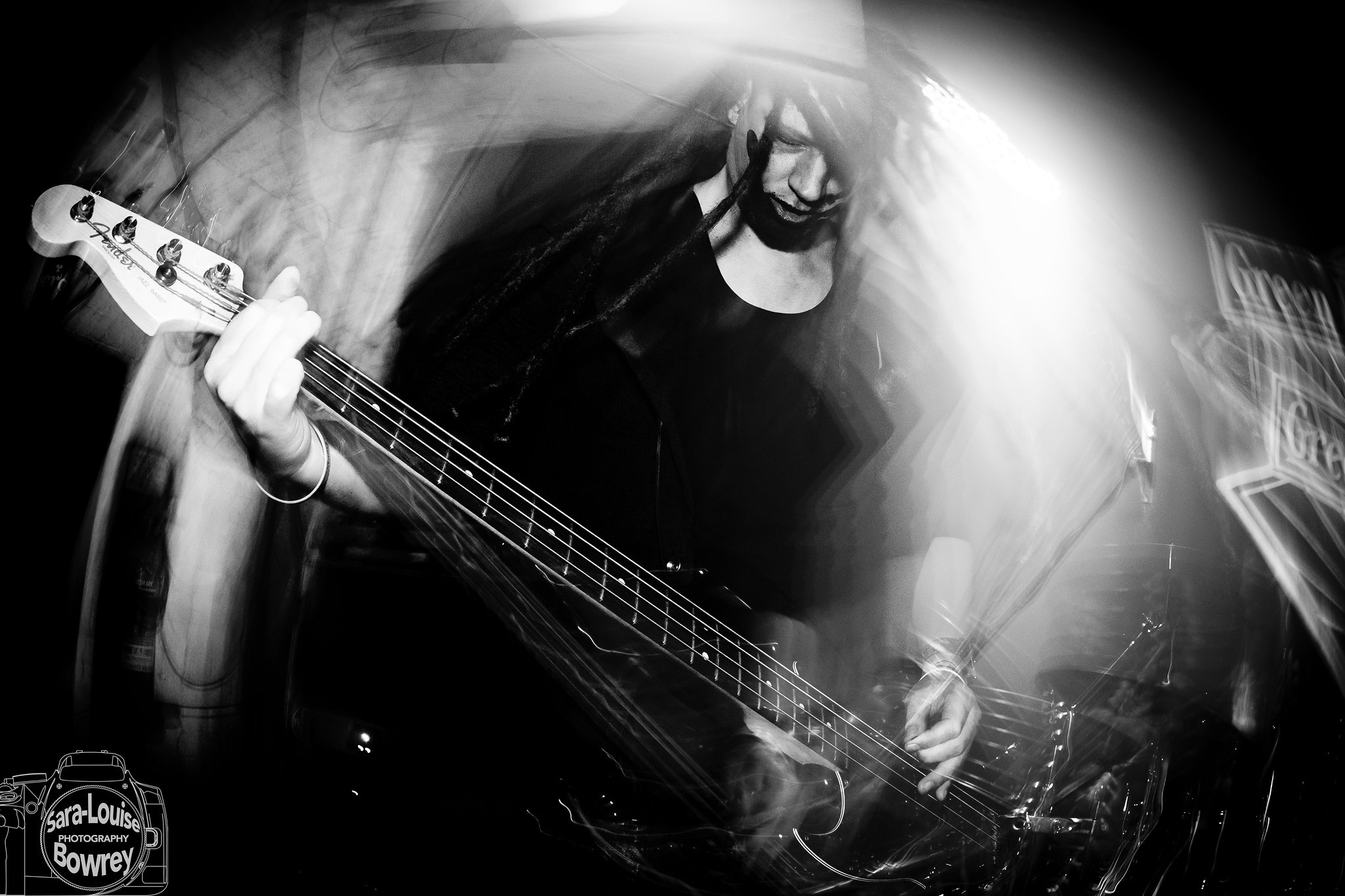 Tonight we headed off to the popular Green Door Store in Brighton to take in four up-and-coming bands. On the bill were this evening are IAMWARFACE, Dramalove, Flote Sulu and Little Triggers.

Upon arrival, we were warmly greeted by the event organisers, Blue Door Productions, who are very nice people indeed and have a real passion for what they are doing. 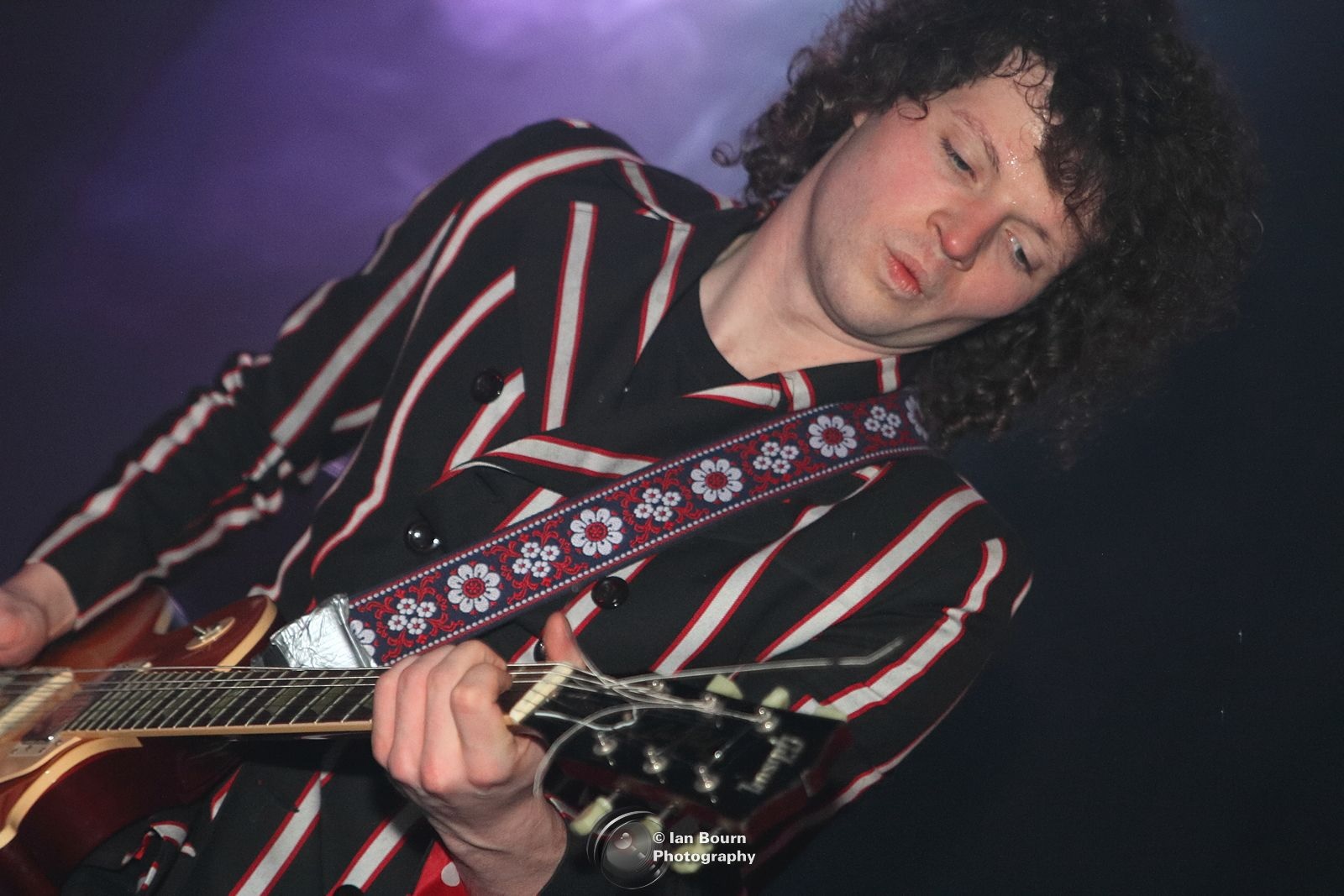 Drinks purchased, we headed through the black curtain and were immediately greeted by the usual distinctive pungent aroma that emanates from the venue after they have scrubbed it down. Before long, the openers Little Triggers took to the stage. Seems that this Liverpool based outfit has recently undergone a drastic restructure and are now just a duo (of Tom guitar/vox and Jay drums/bv’s), but strangely with double the power from the previous extended lineup which had included rhythm guitarist and bassist Lowell and Chris.

It’s fair to say that Little Triggers are loaded with adolescent fury and healthy aggression and need to be experienced live in order to fully comprehend their fiery performances. These fellas rock with a capital R. Throw AC/DC, Led Zeppelin, and Brighton band SONS into a pot – et voilà ! you have Little Triggers. Metal with a slight punk tinge is the order of the day. The crowd seem to like them, especially one of our photographers (Ian) who was absolutely buzzing! I, myself, was not. Don’t get me wrong, they are clearly good at what they do, but they are not for me. Maybe you should decide for yourselves and check out their next Brighton gig, which will be on 18th April up at The Hope & Ruin – tickets HERE.

This evening, crowd highlights appeared to be their new album opener, ‘Giving Me Up’ and their forthcoming single which will hit the streets on 13th February. Vocalist and Marc Bolan look alike, Tom, was so enthusiastic during their set that he inadvertently knocked microphone and stand flying off the stage and also broke a guitar string too – rock’n’roll eh! 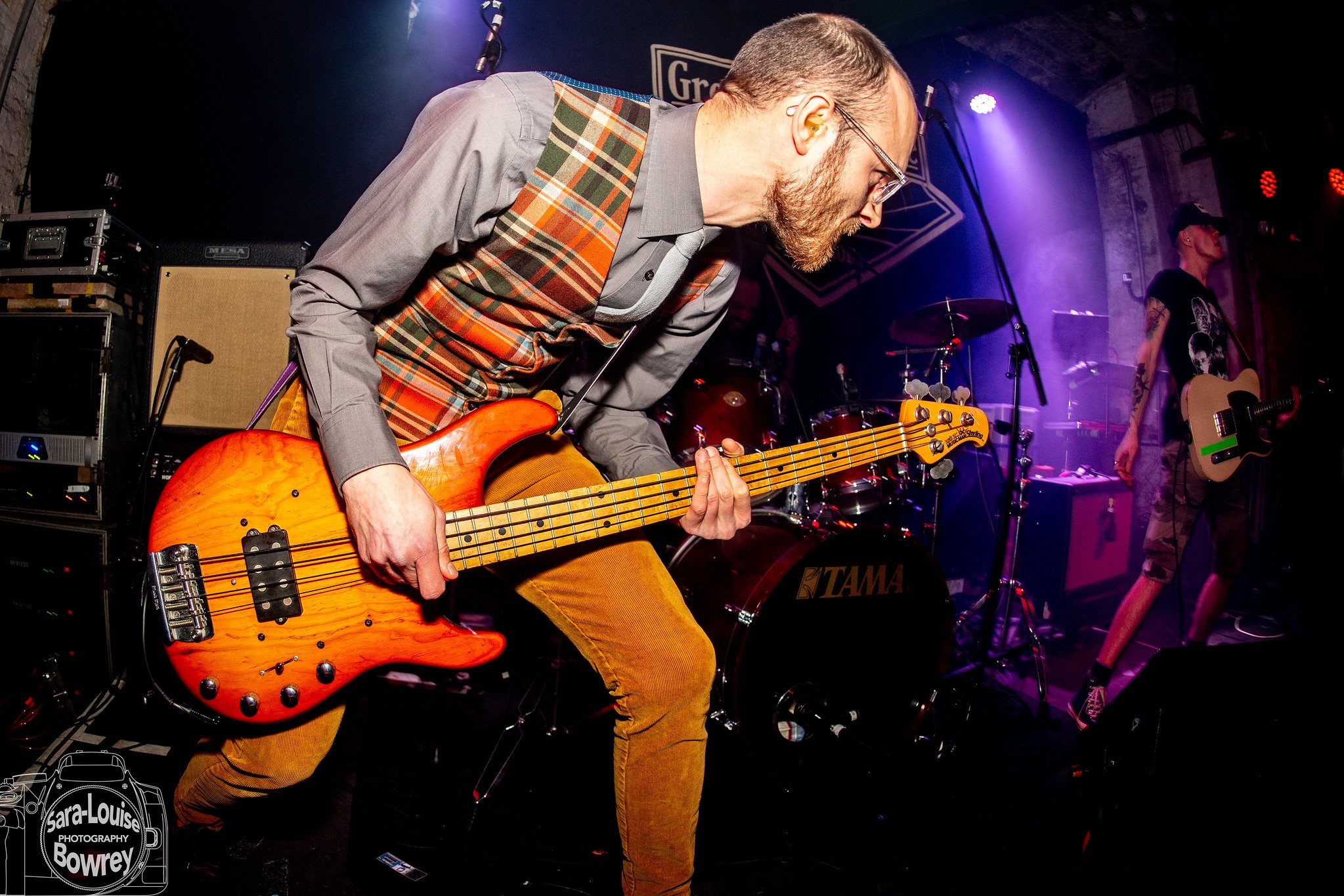 Next up, were the intriguingly named Flote Sulu who are a newly formed Brighton based trio consisting of Hayden Ashdown (guitar/lead vocals), Ben Baker (bass/bv’s) and Jonathan Stanger (drums).

According to the guys “Flote Sulu combine Sludge/Alternative/Post-Rock and Stoner influences to create original music that excites and inspires us”. To my ears, they can easily be likened to Blink 182 and Linkin Park.

The first thing that everybody immediately noticed about this outfit was Ben’s unusual non-conformist attire. He was very smartly dressed indeed, as if to give a lecture on the history of astronomy or similar. Vocalist Hayden (who was more traditionally clad for a rock outfit) felt the need to apologise for his colleagues dress code, and was immediately answered back by a member of the audience hailing “He’s a scruffy f*kka”, which made us all laugh.

Although they only came together at the beginning of 2019, it appears that they are already proficient musicians, if not website designers (“Lorem ipsum dolor sit amet..” indeed guys!). Their tight set included an instrumental tune that I noted bore a close proximity in parts to a heavier version of ‘Are ‘Friends’ Electric?’ by Tubeway Army (Gary Numan). They concluded their performance with their forthcoming single, ‘The Jackal’ which actually has been on Bandcamp for a while – check it out HERE.

Their next live gig will be on Saturday 8th February at Bar 42 in Worthing, which is located a stone’s throw away from the iconic Pier. Also on the bill will be Ornate Antlers and In Awe. 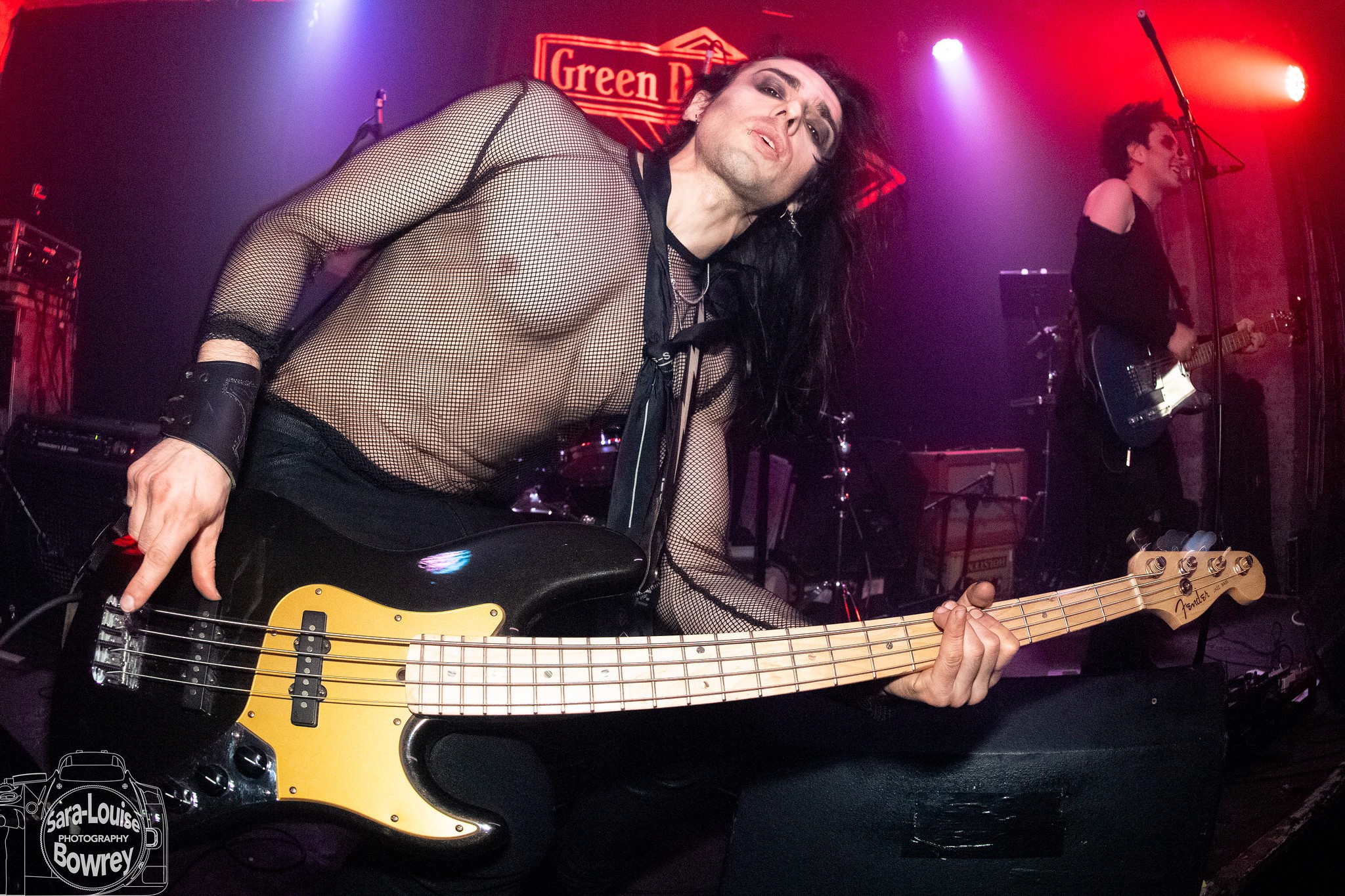 Flote Sulu were followed by the enigmatic Muse-like Dramalove, who are Italian brothers Diego Soncin (vox/guitar), Riccardo Soncin (bass) and Brit drummer Neil Davey. The siblings upped sticks from their homeland around three years ago and settled in Brighton and formed the guyliner, pose throwing, edgy looking Dramalove.

Now here’s a band that certainly look the part, especially buff bassist Riccardo. One would imagine that he has modelled himself on Michelangelo’s marble masterpiece of Renaissance sculpture, David, which was created between 1501 and 1504. This evening he was not alone in this, as Brandon Ashley of Corlyx was also in attendance with his other half Caitlin Stokes.

This GoPro frenzied outfit (Diego had one on the end of his guitar and a guy was filming them too) not only look the part, but ooze with charm, as well as being able to play well, oh and throw a pose or three. At times Diego’s vocals headed into Prince territory, but didn’t musically sound like him. In fact, there’s a slight metal edge to their indie rock, and the crowd were feeding off of this. They premiered a new track called ‘Ghost’, which went down well with the mixed age crowd, and our other photographer here this evening (Sara) picked up on ‘Killing In The Name’ riffs by American rap metal band Rage Against The Machine. Their next single is called ‘Written In The Stars’ and will be out on the 21st February – pre-order it HERE. They closed their set with ‘Inside Outside’, which left the crowd wanting more. For me, the best band so far……however, IAMWARFACE were up next. 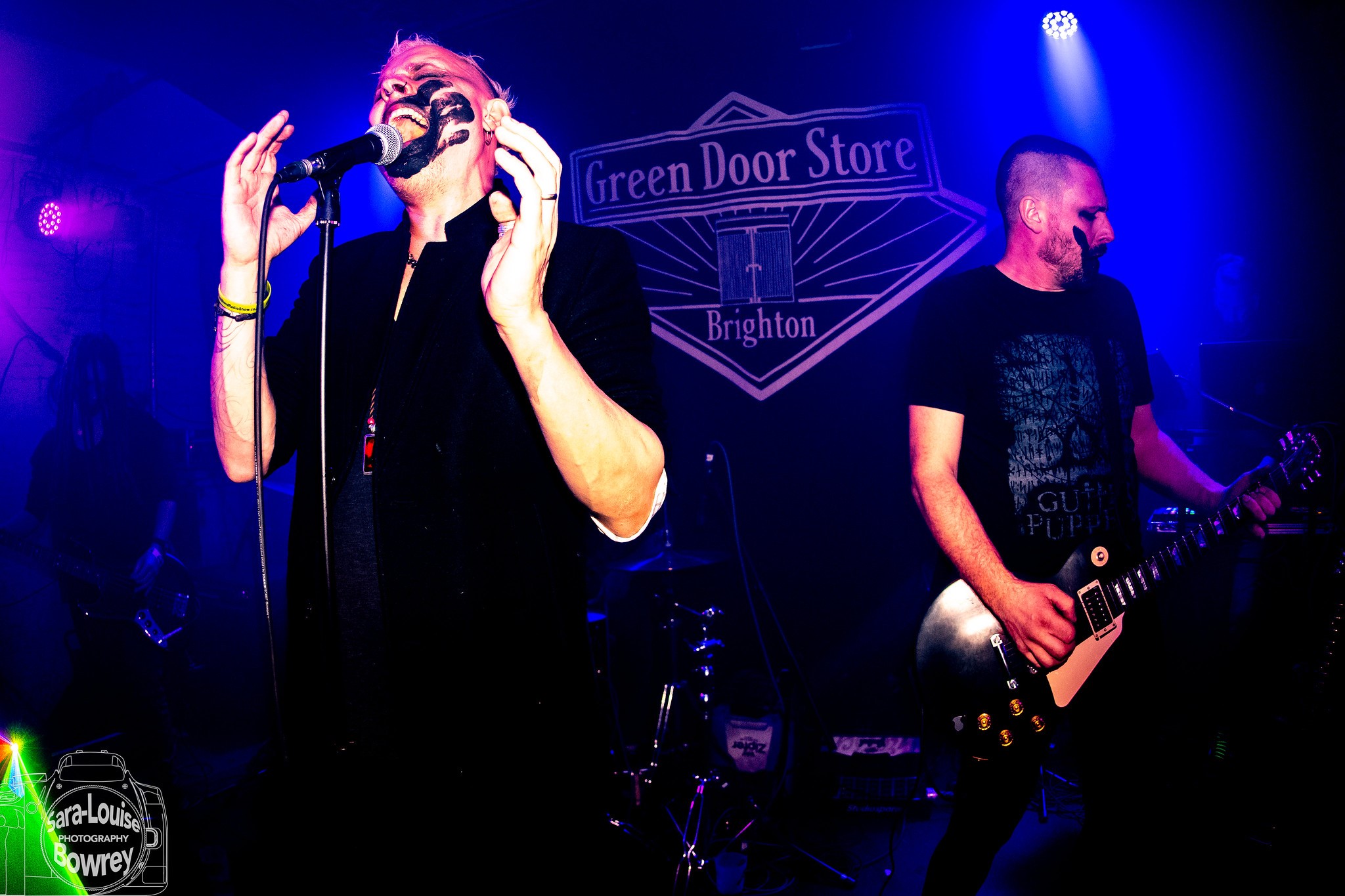 It was now time for tonight’s headline act IAMWARFACE to take to the stage. Here is an electro rock band that was formed in London four years ago by singer/producer Matt Warneford. The other members are Lou Matthews (guitars), Tom Howe (DJ/synth), Mike Smith (bass) and Adam Stanley (drums). The name of the act is a metaphor for Matt’s own original style of bombastic high-energy groove based electro-rock, which has been affectionately branded “Rocktronica” by none other than legendary Virgin Radio host Eddy Temple Morris.

The band have supported Gary Numan on tour and anyone that is aware of Numan’s recent heavy industrial sound, which has brought him renewed chart success, and that of Nine Inch Nails (NIN), will have some idea as to where IAMWARFACE are coming from. They have stated that their inﬂuences include Depeche Mode, Gary Numan, Kasabian, Muse, Nero, Queens of the Stone Age, Tears For Fears, Yeah Yeah Yeahs, Black Keys and MGMT. I would flag up that if your music choice includes darkwave and industrial like Psyche, Project Pitchfork, Diary Of Dreams, Front Line Assembly, Clan Of Xymox and also the heavier side of Depeche Mode, then IAMWARFACE are for you!

Why do I say that? Well, the debut IAMWARFACE album titled ‘Year Of The Dragon’ (which was released on 6th September 2019) includes these corkers – click on each song title to hear them, especially my fave, the first one:
‘Say My Name’, ‘Don’t You Love Me Anymore’ , ‘Fear The Future’ and ‘Closer’.

Tonight the quintet took to the stage with black hand-prints on their faces. The lasers were turned on and the smoke machine went into overdrive. The heavy full on rounded industrial sounds pumped out, especially from the electronic keyboard, which had sadly been missing from all of the previous acts. IAMWARFACE has seriously upped the ante! For me, this was much more like it, although sadly they had to cut two tunes as time had been moving on. Their sound was bigger and better …much better!

Here is a band that surely deserve to be bigger than they currently are. Is it a matter of time? Frontman Matt has the stage presence and they have an air of an act that surely must headline the dark music ‘Wave-Gotik-Treffen’ festival at some stage. This annual event takes place in Leipzig in Germany with 150+ acts on the bill.

This evening they played ‘Vampire’ which will be appearing on the next album. It was a more guitar frenzy affair. A signal of a slightly new direction? Time will tell.

IAMWARFACE are all over social media, start at the website: www.iamwarface.com 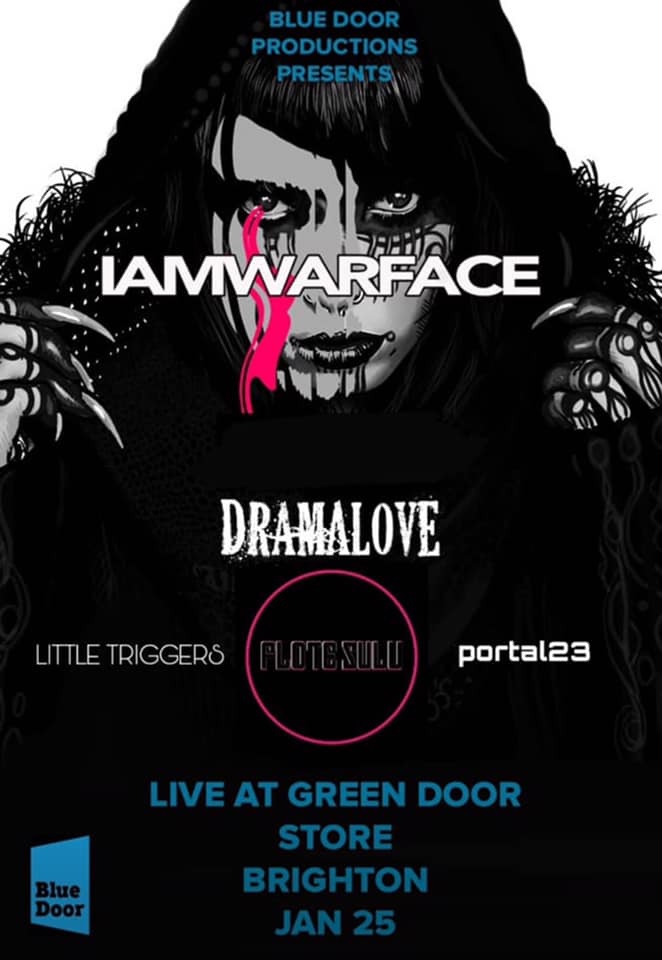