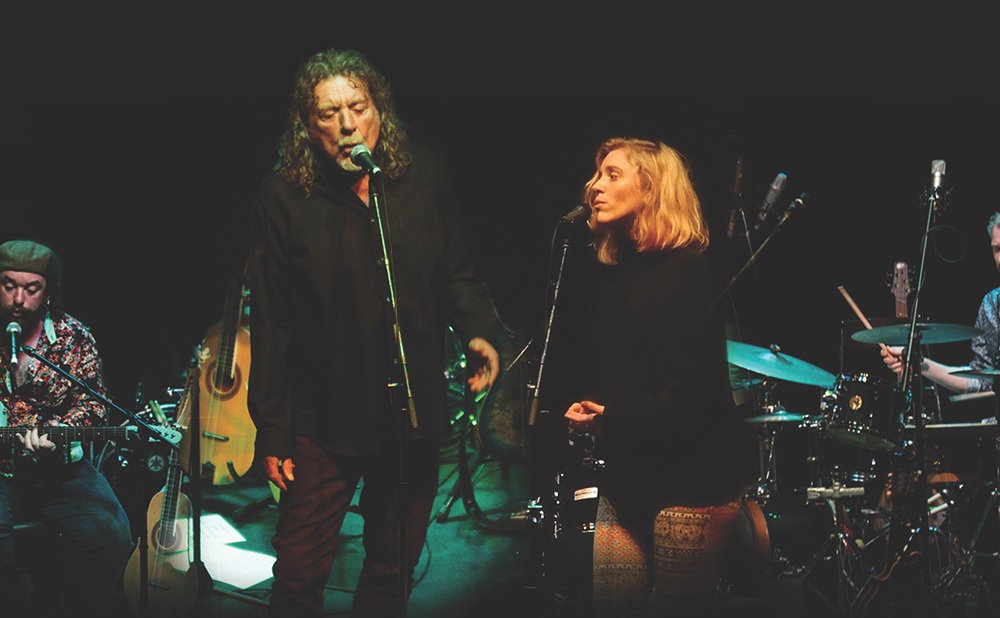 Saving Grace will be appearing at Black Deer Festival 2020

Award-winning Black Deer Festival is incredibly excited to be announcing the second selection of artists who will be taking to the stages in Kent this June. Joining the already-announced Wilco (South England exclusive), The Waterboys, The Dead South, Courtney Marie Andrews, The Felice Brothers and many more, will be the likes of Shooter Jennings, Wildwood Kin, Jade Bird, Saving Grace (featuring Robert Plant and Suzi Dian) amongst many more.

Saving Grace is a co-operative featuring Robert Plant & Suzi Dian (vocals), Oli Jefferson (percussion), Tony Kelsey (mandolin, baritone & acoustic guitars) and Matt Worley (banjo, acoustic and baritone guitars and cuatro). These five musicians work in glorious harmony from start to finish, reworking a selection of diverse cover material that has been collected from various places creating a musical journey in its truest form. Furthermore, this odyssey has been undertaken in the spirit of appreciation, musicianship and exultation. They truly are a band of joy. “From a whisper to a scream…”

Left to right: Imelda May, Sam Duckworth (Get Cape. Wear Cape. Fly), and Jade Bird are all appearing at Black Deer Festival 2020 (click on pics to enlarge!)

Irish singer, songwriter and multi-instrumentalist, Imelda May will bring her unique vocal talent to the festival. Her career spans seventeen years and includes collaborations with such musical heavyweights as Ronnie Wood, Jeff Beck and Jools Holland, helping her achieve over thirty million streams. Dubbed ‘the other queen of Ireland’ by Bono, Imelda is providing a strong case to become Irish royalty with the recent success of her brilliant ‘Life Love Flesh Blood’ album – co-produced by roots legend T Bone Burnett and is a former UK Americana Charts number 1.

Born in Northumberland, Jade Bird exploded onto the music scene at an early age. In 2017 Bird won the ANCHOR 2017 award of the Reeperbahn Festival in Hamburg and also was a finalist for the BBC Sound Of Award in 2018. Her debut EP ‘Something American’ was released and soon followed by her self-titled album (the 2020 recipient of the ‘Best Selling Americana Album’ at the UK Americana Awards last month) which includes songs such as ‘Love Has All Been Done Before’ and ‘Uh Huh’. The album went to number one in the UK Folk charts and got to number ten in the UK charts. In 2019, Bird won the International Breakthrough award at the AIM Independent Music Awards and was invited on a US tour with Jason Isbell & The 400 Unit and Father John Misty.

Lukas Nelson & Promise Of The Real is an American country rock act based in California. Lukas follows in father Willie Nelson’s footsteps taking to the front of stage on vocals and guitar. Promise of the Real have been Neil Young’s regular backing band since 2015 and have achieved several platinum selling collaborations. Newest release, ‘Turn Off The News (Build A Garden)’ follows Lukas’ high-profile collaboration with Lady Gaga and Bradley Cooper on 2018’s blockbuster film and soundtrack, the multi-award winning ‘A Star is Born’ soundtrack.

Sam Duckworth / Get Cape. Wear Cape. Fly from Southend, Essex has been releasing music for fourteen years, totalling six studio album releases. His catalogue includes four top 10 singles, two top 40 albums and a gold certified plaque for the seminal ‘Chronicles of a Bohemian Teenager’. Making his eagerly anticipated return to performing live this year, Sam Duckworth will be performing both past favourites and new songs.

Shovels & Rope are an American folk duo from South Carolina. Consisting of husband and wife Michael Trent and Cary Ann Hearst, the duo have released seven studio albums since 2008. In 2012 the pair worked with Dualtone Records and released the Album, ‘O’ Be Joyful’. In January 2013, Shovels & Rope made their network television debut playing the song ‘Birmingham’ on The Late Show With David Letterman, opening up their fanbase and making them an international name to look out for.

Born in Nashville, Tennessee, Shooter Jennings is an American singer-songwriter best known for his rocky side of country music and his hits ‘The Gunslinger’ and ‘Outlaw You’. Jennings has released seven albums including his debut ‘Put The “O” Back In Country’, which hit the Billboard Hot Country Songs charts with the single ‘4th of July’. Shooter has worked with big hitters including Billy Ray Cyrus, Wanda Jackson and Deana Carter and co-wrote and produced Guns ‘n’ Roses legend Duff McKagen’s 2019 solo record. Jennings has also appeared in films and series such as ‘Walk the Line’, ‘CSI: Crime Scene Investigation’ and Marvel’s ‘The Punisher’. He recently recorded his father Waylon’s hit ‘Mama Don’t Let Your Babies Grow Up To Be Cowboys’ (the theme to the Netflix series The Ranch) alongside fellow country royalty offspring Lukas Nelson.

Birds of Chicago are married duo Allison Russell and JT Nero. Birds Of Chicago were founded in 2012 in Chicago, Illinois and have released three studio albums and one live album. Their live album, ‘Live From Space’, was named one of 2014’s best country albums by The Telegraph. In 2018, Birds Of Chicago release their latest studio, ‘Love In Wartime’. More recently Allison Russell joined forces with Americana leading light Rhiannon Giddens as part of the 2019 Grammy-nominated Our Native Daughters project.

UK Alt-folk trio Wildwood Kin is made up of sisters Beth and Emillie Key and their cousin Meghann Lonely. The band has over twenty million streams across their EPs and debut studio album. “There’s a drive, a crunching sense of abandon that litters every song they place their name against. Three musicians with a taste for ambition” – Clash. Each song on their debut album ‘Turning Tides’ was built around a message that suits the band as can be heard on ‘The Crown’ which questions if politicians would actually stand for their beliefs if they had no power.

Hailing from Waco, Texas, Wade Bowen is a country singer who released his first album ‘Try Not To Listen’ in 2002. Bowen played 250 gigs that year and the title track reached the Top Ten on the Texas music chart. His follow up albums ‘Live At The Blue Light’ and ‘Lost Hotel’ were released in 2006, both were a success, introducing Bowen to an audience outside of Texas. His next album, ‘If We Ever Make It Home’, was released in 2008. This became Bowen’s first time appearing on Billboard’s Country album charts reaching number 29. In 2015, Bowen released his most successful album so far, ‘Hold My Beer, Vol.1’, which went to number 4 in Billboard’s Us Top Country Albums. In 2019 Bowen released the powerful hit documentary ‘Inconsistent Chaos’ which focused on the popular singer’s battle with haemorrhaging vocal chords and the threat to his career.

William Prince from Manitoba, Canada is a country folk singer-songwriter who broke onto the Americana scene with his JUNO Award winning debut album ‘Earthly Days’. Prince is set to release his sophomore album ‘Reliever’ on February 7 featuring a “collection of exceptionally rendered explorations of what, who and how peace is found.”

BIMM Brighton alumnus, Josh Okeefe has become a rising country star in Nashville. At 23, Okeefe has shared the stage with Grammy Award-Winning artists Alison Krauss, Jamey Johnson and others. Josh describes his life as “… surreal. I feel lucky that I get to write songs and make music for a living. Never expected it, never thought about it either.” He has topped the Billboard and iTunes Charts and his debut EP got to number 15 on the top 100 iTunes country albums chart.

Infectious Welsh trio The Goat Roper Rodeo Band consists of just an upright bass, two guitars and medley of vocal harmonies. Recently released LP, ‘Tall Grass’ marks the third release from the band and continues their showcase of Bob Dylan and Waylon Jennings inspired country blues, one of those bands you just can’t afford to miss at the festival.

Black Deer is not just about hearing the music you love, it’s about discovering music you’re going to love and experiencing the unique cultural richness that surrounds this popular way of life we call Americana. The natural ingredients that complete this simple melting pot can all be found at Black Deer – from authentic smokehouse BBQ cooking and a righteous Sunday gospel brunch to the thrill of custom motorcycle culture and a connection with nature to inspire the young folk, the festival is a community gathering for those who love to get it together in the country… we’ll see you in the deer park.

Have a look at the 2019 show photographs HERE.

Tickets options are on sale now – purchase them HERE. 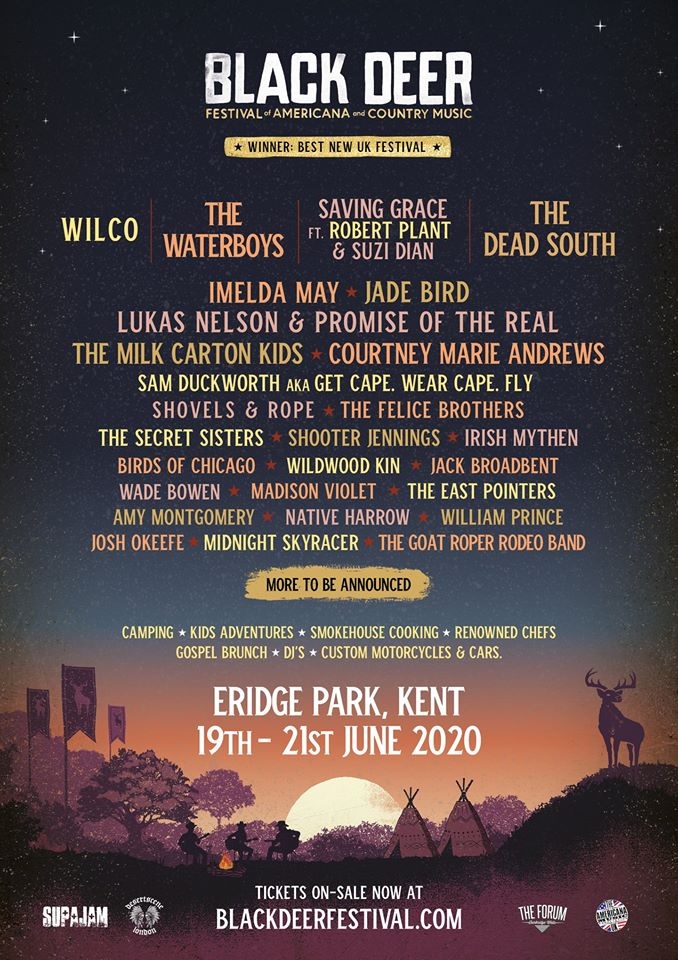