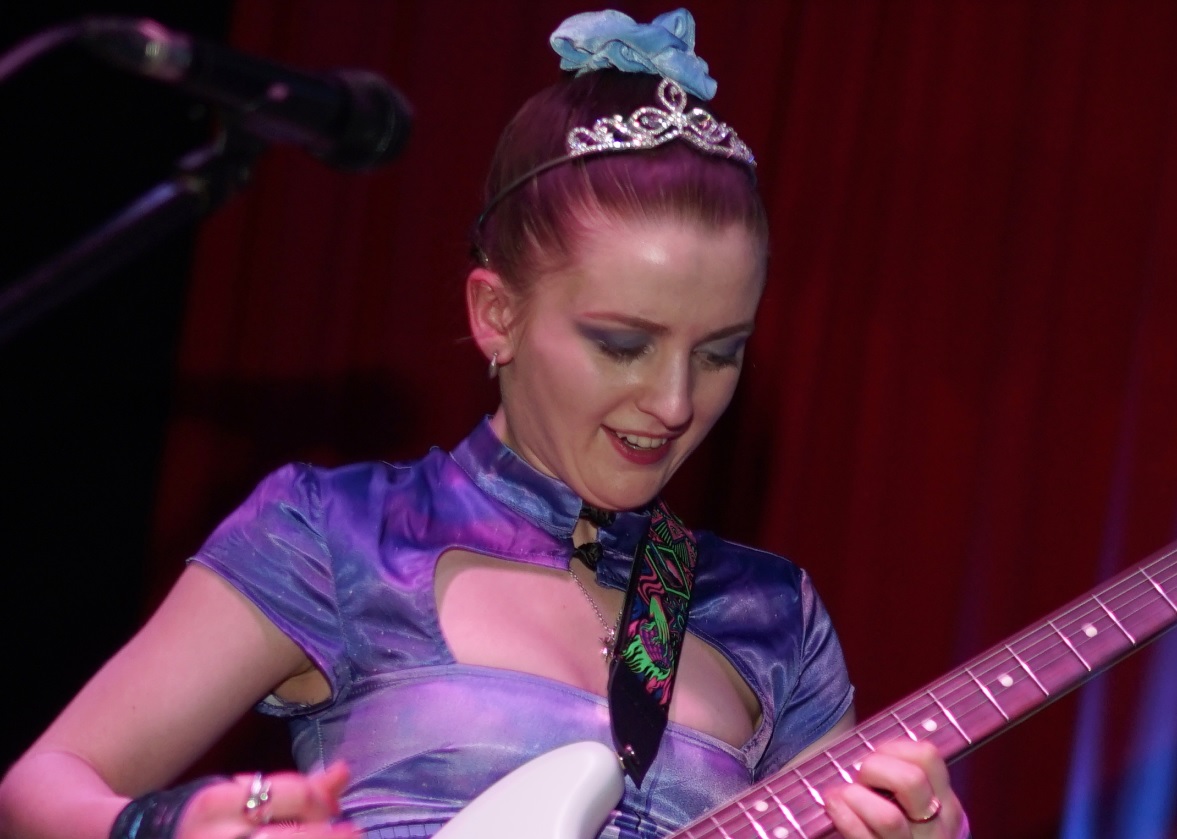 Brighton based concert promoters Joy. welcomed us into the doors of the popular Brighton Electric Studios, which is located on Coombe Terrace, a short distance south of University of Brighton, in order to lay witness to the highly anticipated sophomore EP ‘Everything At Once’ from Brighton quartet Thyla which sees its debut’s tonight. 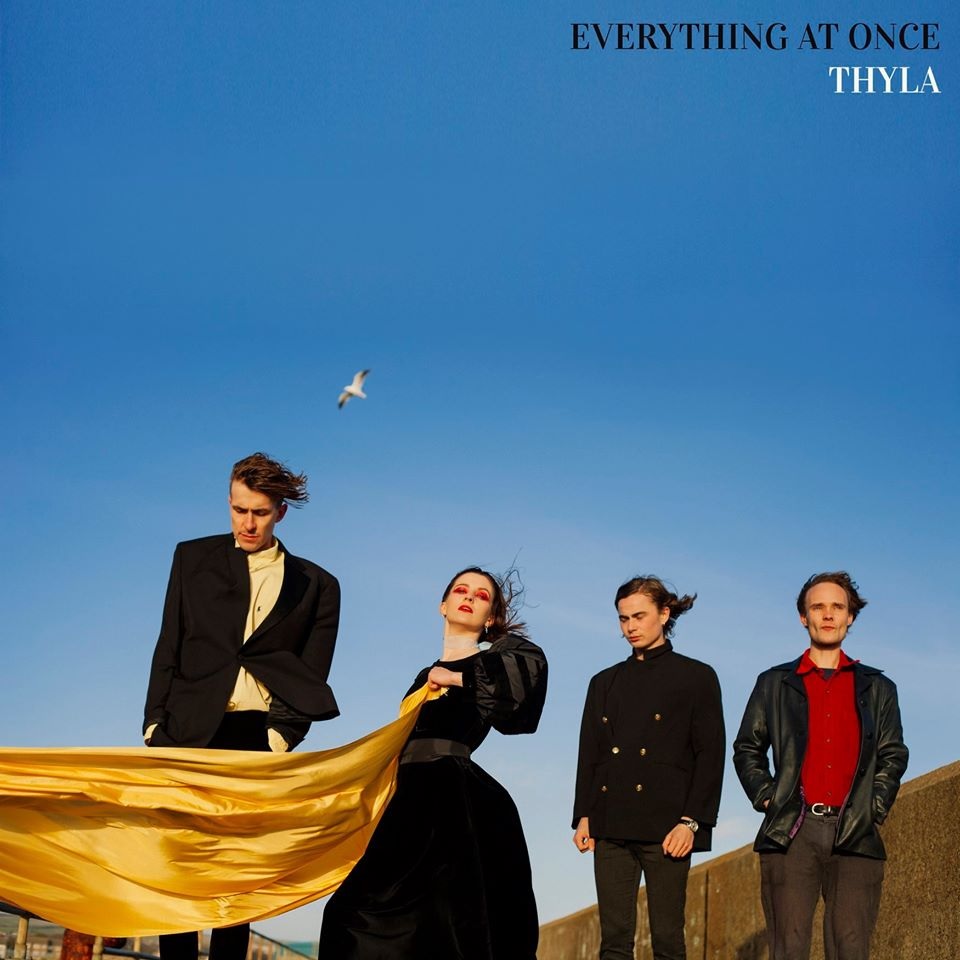 Thyla’s ‘Everything At Once’ EP

To honour this momentous occasion Thyla is hosting a first showing of their new EP at the Electric Studios, where the band originally formed and started rehearsing together. This new EP looks to be their strongest to date and should kickstart a year of new music and live performances to come.

Supporting Thyla tonight are some of Brighton’s best up and coming talent from the likes of Nature TV and Murmur filling the performance room of the studio with new sounds and colourful fresh ideas. 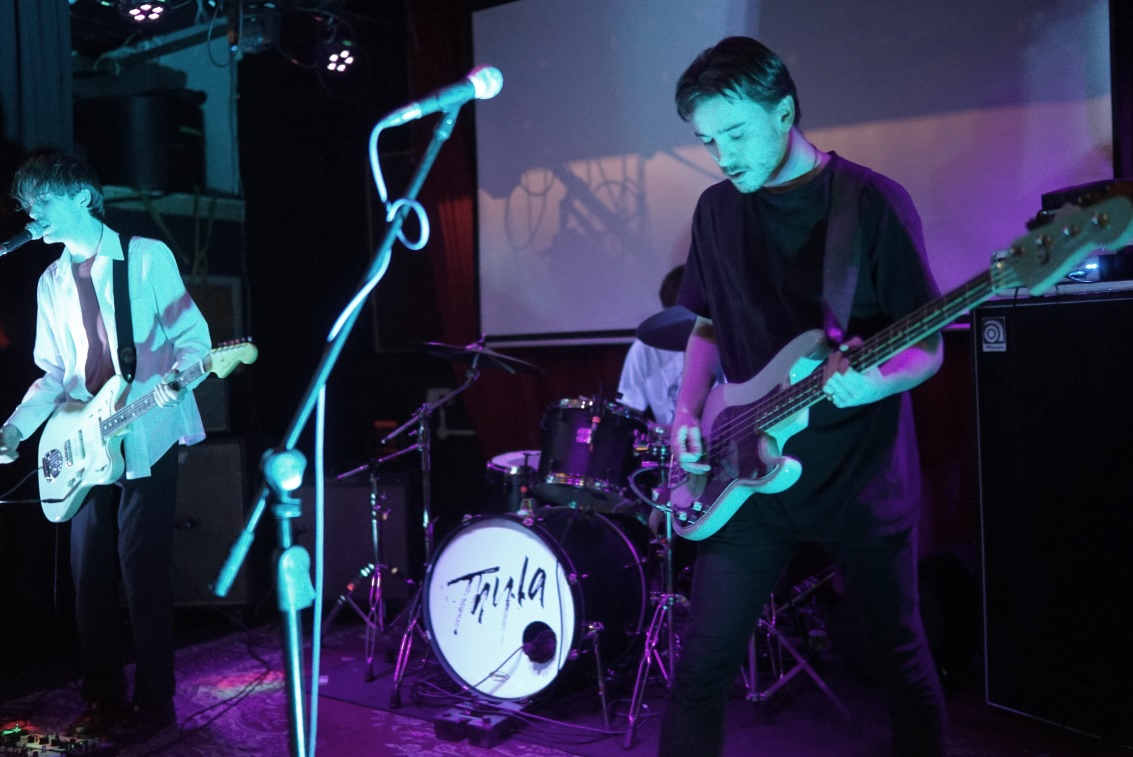 Murmur
First to the stage at 8pm is Murmur, a 3-piece noise rock outfit hailing from East Staffordshire, but now based in Brighton. The trio are George Mills, Ben Jordan and Jack Looker, and tonight they launch into their 7 song set with heavy guitar and warbling vocals, that begin to shake the small room with waves of sound and riffs. The boys look fairly young, but this doesn’t matter as their talent and lots of fuzz flow through the large stage side amps of the venue. The bassist and guitarist provide vocals in tandem, which adds to the atmosphere as the instruments heave overdriven sonic waves that swirl above us in the audience.

Throughout the half an hour set the 3 boys plough through their song list with little to no problems other than some slight mixing issues in which the vocals became quite buried under the other instruments. Their set ends on the song ‘Shiner’, which starts slower than most of the rest of their songs and then builds into a tremendous tune with heavy pedal use. Even though the venue is not full at this point, the group of guys get a good round of applause and leave the stage.

Check them out on Soundcloud. 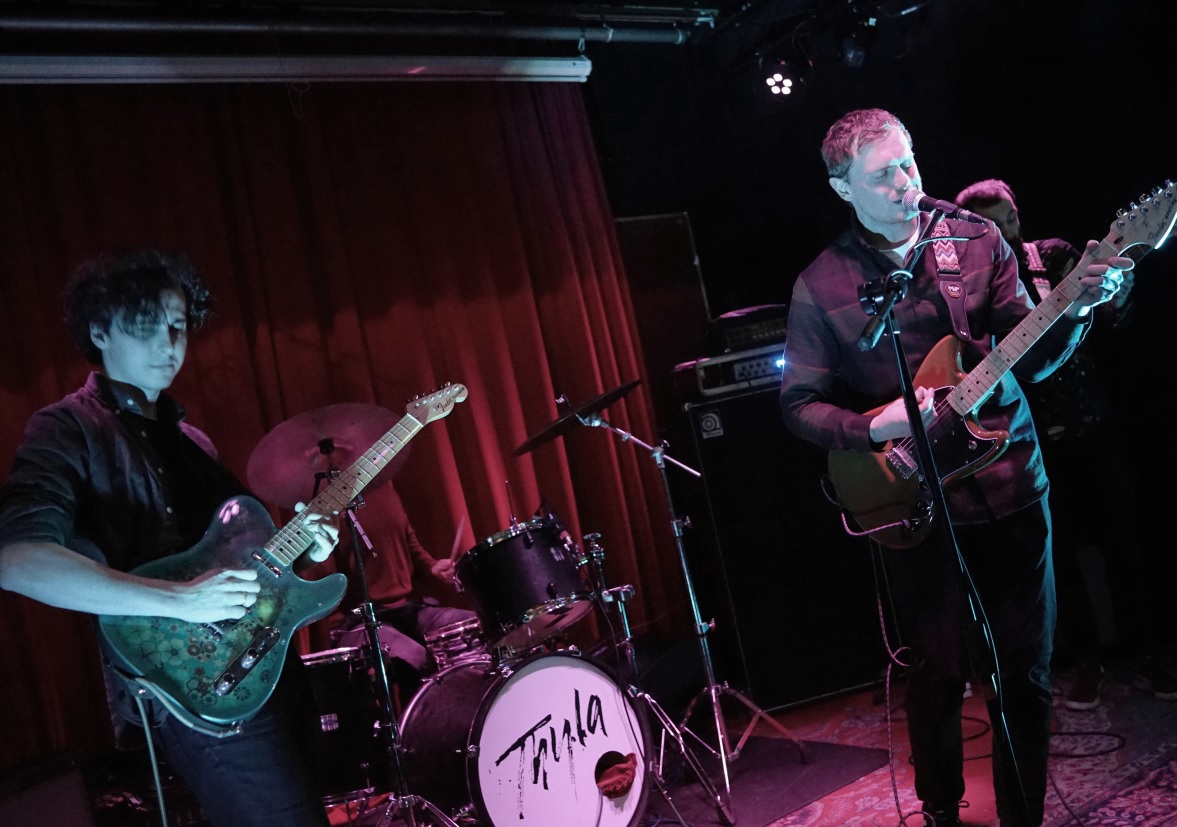 Nature TV
Second up to the stage at 9pm is Nature TV. A Brighton based 4-piece performing alternative, indie rock and lo-fi tunes for us to hear and enjoy. They describe themselves as “door-to-door heartbreak salesmen”. The band is comprised of Guy, Zal, Josh and Solo playing a fairly standard lead, rhythm, bass and drums set up.

When they start playing, they are slower paced than the first act, which is taken as a pleasant change with poetic and well-sung vocals, and a more laid back sound. They have a decent amount of reverb and this leads more into their soft and stylish sound which produces some foot-tapping and head nodding. They stay consistently tuneful throughout their set and continue to produce more clean sound which swells and bubbles through the audience. They give a very topical shout out to CoronaVirus about how brave we are for going anywhere this inclosed together in a really quite funny way.

Overall these guys all seem like really nice people and stay cheerful throughout the set. Their sound is consistently comfy and would sound great on a record being played on a hazy Sunday morning. They end on the song ‘Moonlight’ in which the very talented guitarist provides us with dripping licks from his guitar and features some sudden tempo changes which tighten the atmosphere ready for Thyla to take to the stage later. They are playing The Hope And Ruin on the 20th February in support of PINS and I would recommend giving them a try.

Nature TV setlist:
‘She Wants To See You Cry’
‘Drowning’
‘Only One’
‘Get High/Get Down’
‘Smoke’
‘Moonlight’

Check them out on Soundcloud and visit the band’s website www.naturetv.co.uk 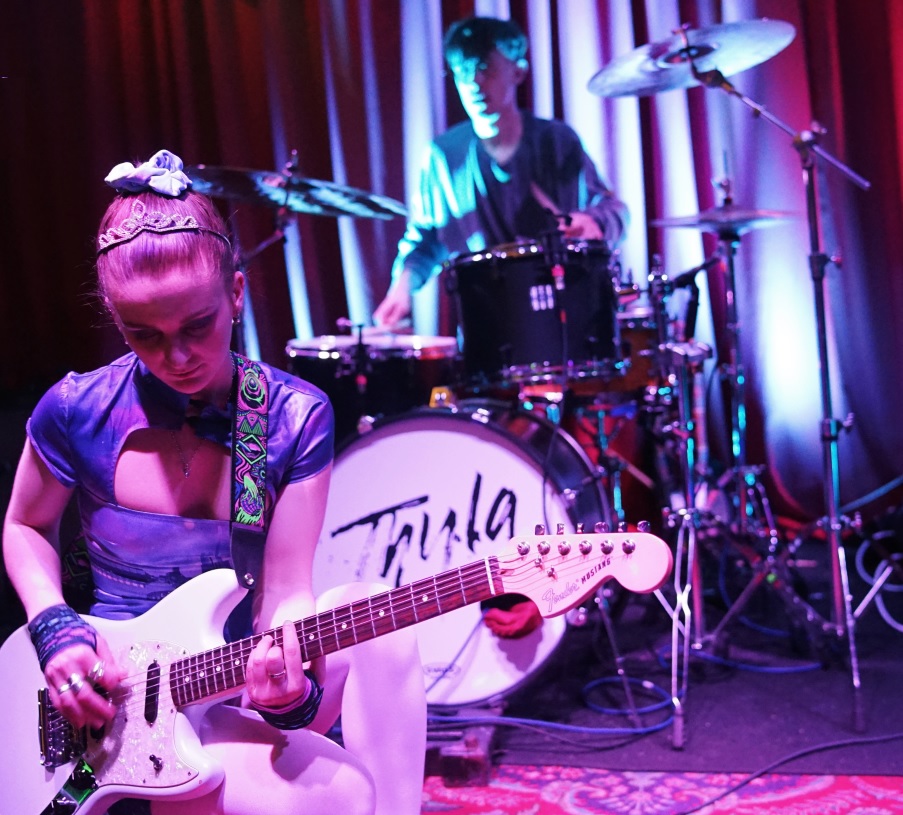 Thyla
The headliner of the evening Thyla takes to the stage at 10pm. The Brighton 4-piece consists of Millie Duthie (vocals), Dan Hole (bass), Danny Southwell (drums) and Mitch Duce (guitar). They craft intricate walls of sound from within their second home of Brighton, and then tames, culls and tailors these sonic offspring with immaculate attention to detail to produce a mix glistening dream pop and post-punk.

Putting the personal over political, the bands first self-released EP ‘Everything At Once’ sees the 4-piece stoke their fires with former setbacks. The turmoil of family illness, juggling sh*tty day jobs and navigating modern age-induced anxiety. The EP was recorded at Brighton Electric Studios (where this first performance is happening tonight) and was produced by Josh “Hoagie” Harrison who has also produced for the likes of Royal Blood, British Sea Power and Blood Red Shoes.

They come to the stage in unison to applause and start by making some reverberating sounds to amp up the atmosphere of the intimate venue. The set starts with the song ‘Amber Waits’ driven with some heavy distortion and spoonfuls of fuzz. The bassline plays well with the melodic cutting vocals. The band fills the stage and space with their presence and dominates our attention from start to finish.

They work in perfect harmony with tight drums and mingling guitar flourishes. Millie shouts off a “Thank you very f*cking much Brighton” before explaining how much this new EP means to them. Millie is wearing a tiara, a silk blue dress and some stomping trainers, it’s quite a look while she swigs her red wine. This gig falls on a Friday night which is always good for adding energy and enjoyment to the performance as everyone let’s their hair down for the weekend.

A stand out track is ’Lennox Hill’ which is a song about childhood. The song has a quick on and off baseline and breaks into a great bridge section. The entire gig moves into a more major key as this is a celebration of their new music. The performance is well rehearsed and continues to prove how established the band is. The set ends on ‘Everything’ and the atmosphere is a triumph as Millie falls to her knees to finish the song. They give a big thanks to everyone who came and they then receive a wave of whoops, applause and whistles thoroughly satisfied with what we have heard.

For further information on Thyla, visit their Facebook page. 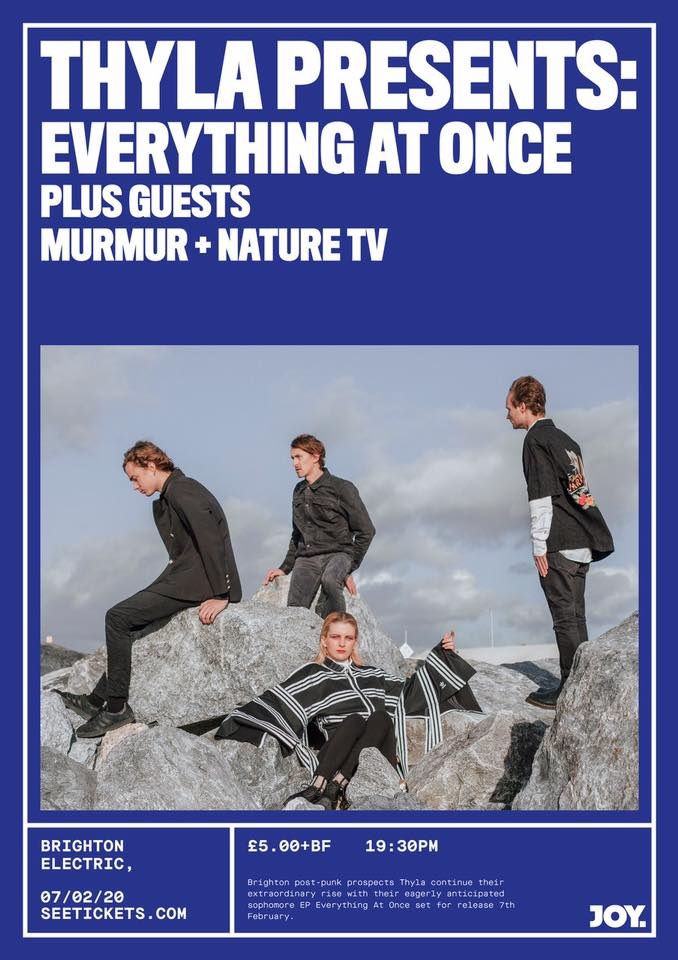 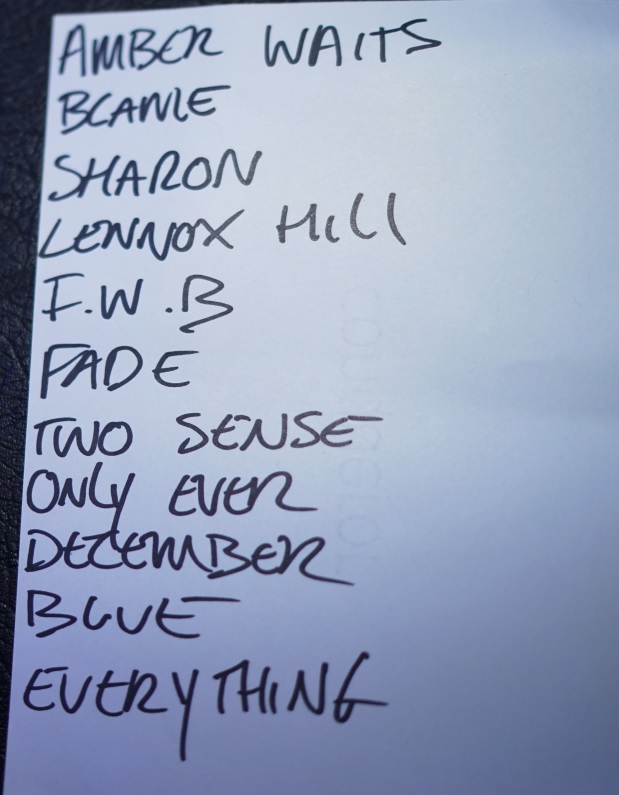