Poliça put on a ‘Steady’ performance in Brighton 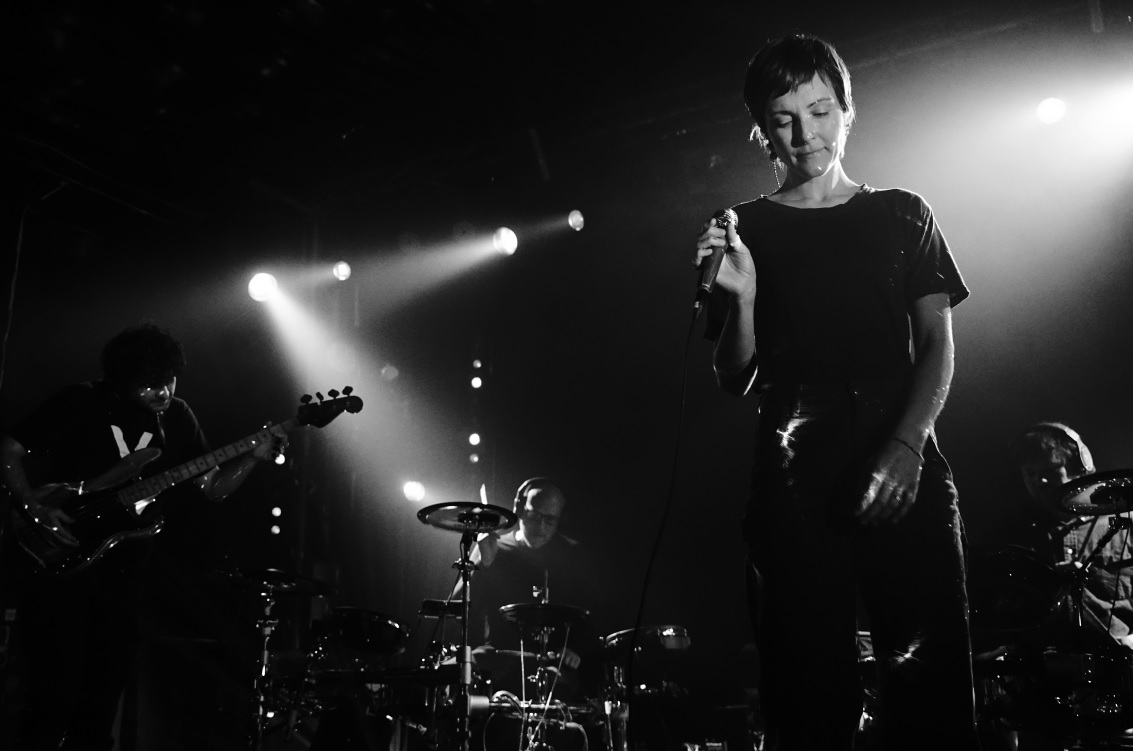 It’s usually tour time when a band releases a new album and Minneapolis synth-pop group Poliça are no exception. Released on 31st January, this album has hit BBC6 and other good music stations disc rotation hard!

This new album ‘When We Stay Alive’ launches a new round of extensive gig dates for the band across Europe (yes, that included the UK too!) and then on to North America and Canada for a comprehensive call in at key cities there too. So many concert dates shows that the public are eager to this new body of work after an accidental hiatus (literally) after vocalist Channy Leaneagh fell off her roof while clearing ice in early 2018; she smashed her L1 vertebrae and battered her spine, leaving her in a brace with limited mobility for months. 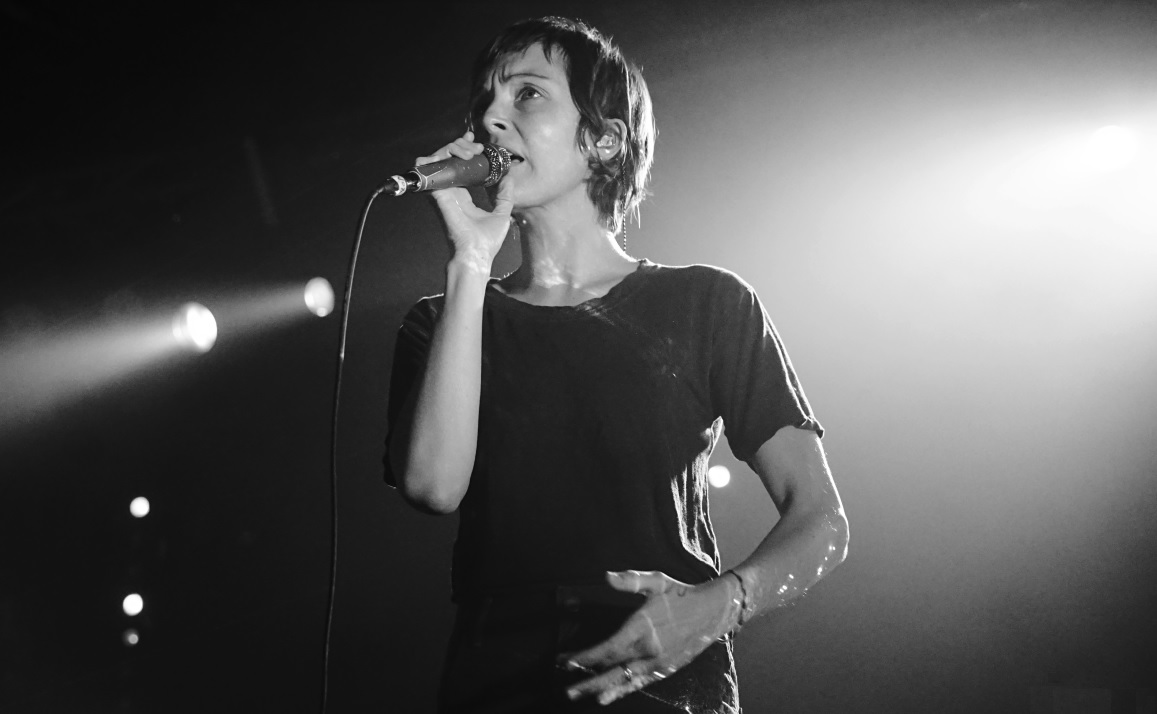 Formed in 2011, this new work is Poliça’s fourth album or technically the fifth studio album if you count collaboration with Stargaze in 2018. ‘When We Stay Alive’ is a game of two halves, with half of the tracks being written before Leaneagh’s accident, and the remainder following on from a long recuperation period.

Spliced together, the two halves form a meditation on this experience and a journey inwards to reflect on community and family with track ‘TATA’ inspired by the challenge of keeping a cool head in the face of tense community meetings where anger grow about Northern Metals, a north Minneapolis company under fire for pollution issues.

The latter half is more of an exploration of the Self. Channy explores her identity in the haunting ‘Be Again’, a song recorded as she relearned to sing while wearing a back brace. “For me this song is a meditation to myself,” Leaneagh explains. “To come back from the disassociation I’ve lived with most of my life.”

‘When We Stay Alive’ possesses a new confidence in its sound, reflected in its fierce, determined songs and anchored by the heavy synths and punctuating beats of Poliça co-founder and producer Ryan Olson.

Myself, I would give them a thumbs up alone for naming their second album ‘Shulamith’ after a legendary American second wave Feminist. Bon Iver founder Justin Vernon told Rolling Stone, “They’re the best band I’ve ever heard”. 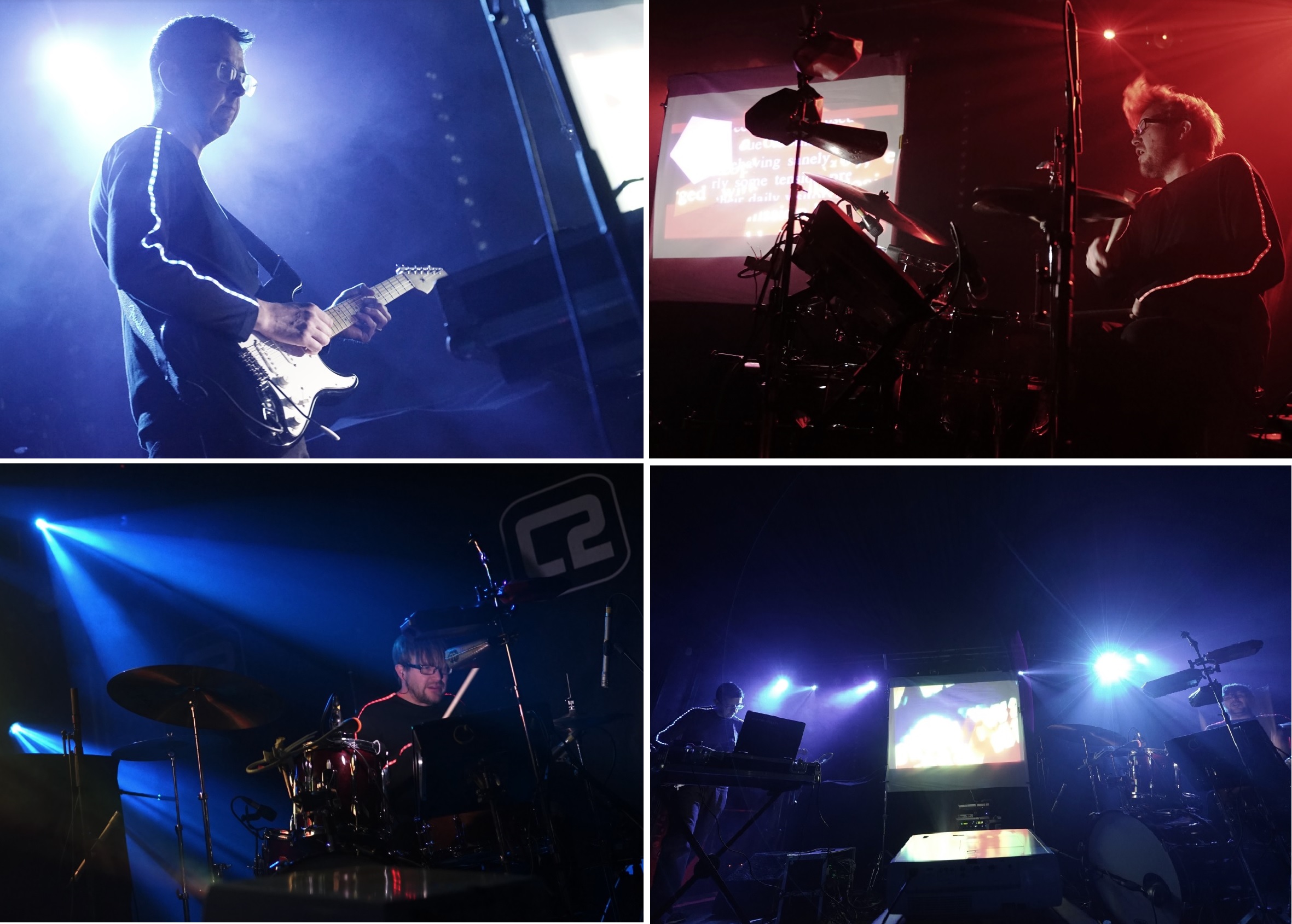 The band was ably supported by band Warm Digits, an unexpectedly excellent duo with ‘70sesque acid coloured film screening and quirky LED lit bright jumpers. Checking out their albums prior to the gig, there is a nod to artist Bridget Riley 1960’s artwork on the covers. Very stylish!

The pair, hailing from Newcastle, were playing new tracks from their latest album features vocal contributions from Maximo Park’s Paul Smith, The Lovely Eggs, The Orielles, Rozi Plain and The Delgados’ Emma Pollock.

I’ve not heard this group before and have to say that I am now a total convert. This was a playful mix of 1980’s computer game sounds interspersed with an indie fused retro feel with a sound that is refreshingly different, yet pleasingly familiar.

Warm Digits have created a different projector show for each track. The recorded video chanteuse sounding very like Toyah Wilcox, gave the music a touch of Thatcherite Britain. What a great approach to having virtual guest singers, and just really joyful!

The video of track ‘The View From Nowhere’ was made with singer Emma Pollock using 2D stop-motion animation with Emma’s singing and printed film stills alongside bold sequences of geometric print. Created by artist Josie Brookes, the films are something of a feat even without the accompanying music.

The animation features over 600 hand cut versions of Emma’s head and a couple of hundred arms of Steve and Andy too. Shades of Max Headroom here. To see the full video on YouTube click HERE.

With a nod to Hot Chip, Miami Vice (‘80s TV overlaid with some techno beats) and even early Peter Gabriel, the synth sounds complement the outstanding drumming. Somewhat unusually for the drumming fraternity, this drummer is loquacious – chatty between songs and enthusiastic in all the best ways.

Their fourth track, a new song, (‘False Positive’) offered shades of ‘Tomorrow’s World’ reminding me of the time I bumped into Maggie Philbin in India once and greeted her with “Maggie!”. Their sixth and final track, ‘Weapons Destruction’, was an epic journey, old skool electro, uplifting, upbeat and up for it. Just really fun and unpretentious.

Andy and Steve release their new album, ‘Flight Of Ideas’ on April 3rd on Memphis Industries label. Featuring The Orielles Emma Pollock, The Lovely Eggs, Rozi Plain and Paul Smith. Pre-order your copy HERE and check them out on Bandcamp.

Artist Josie’s work can be seen on her website: www.josiebrookes.com/warm-digits
And animator Tom Madge of AnimateCity’s twitter: twitter.com/animatecity 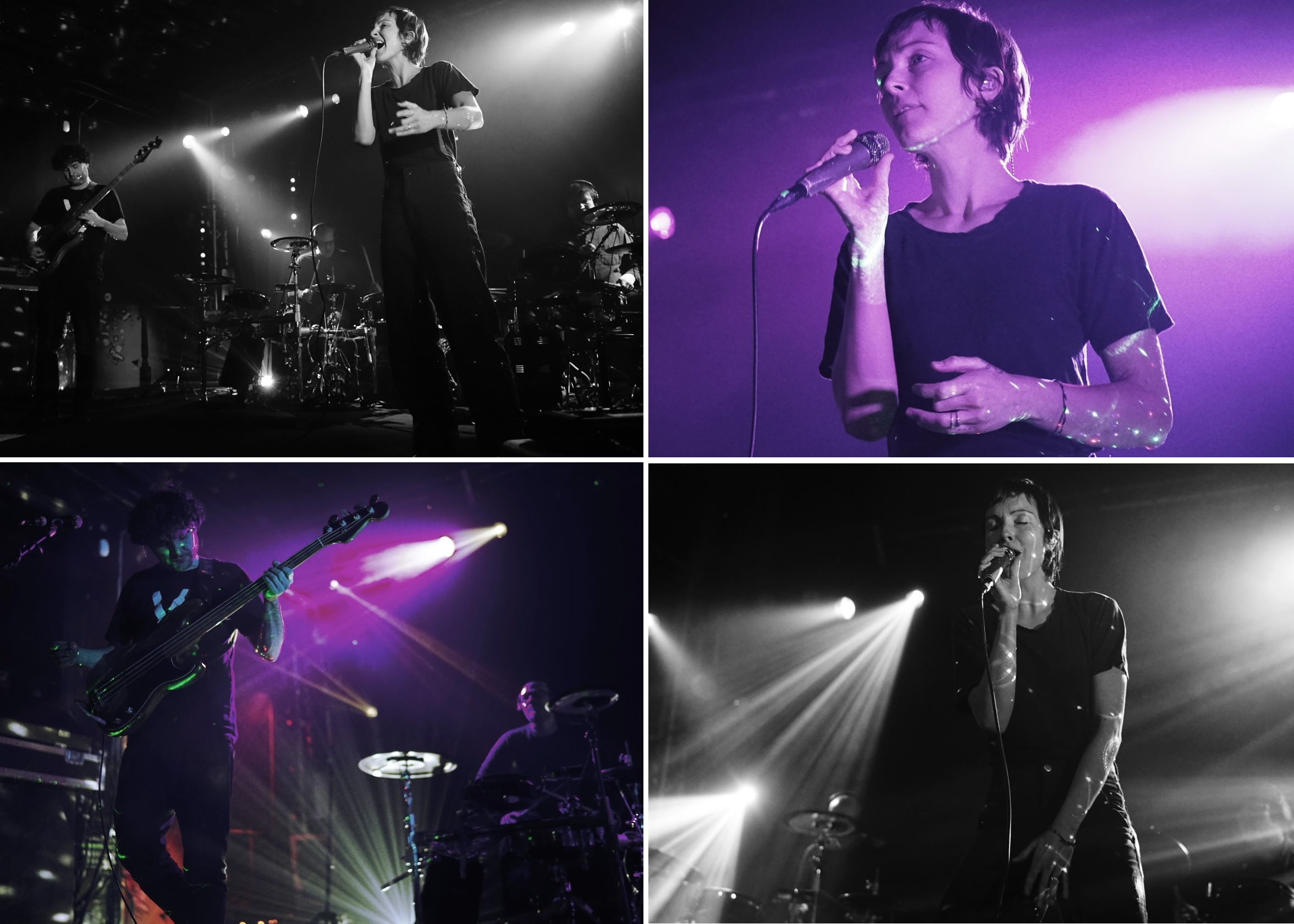 This was a hard act to follow, but Poliça led the way with a four-piece comprising, singer Channy Leaneagh (vocals, synth), Chris Bierden (bass), Drew Christopherson (drums) and Ben Ivascu (drums), launching in to first track ‘Amongster’ with a pounding drum beat. Fully recovered from her accident which left her incapacitated for months, slight and angular Channy is now back touring, and has such a great voice.

Really loud, this gig is a series of potent, powerful, anthemic synth pop. ‘Lime Habit’ their second track, had an ‘80s sound before moving into the haunting ‘Driving’ with a nod to Sinead O Connor and even aspects of the Cocteau Twins, in a similarly lilting tone.

Track six was a new song off the new record ‘Be Again’. Singing “I belong to me”, this was really powerful. I loved this one.

This was followed in quick succession by ‘Sea Without Blue’, ‘Blood Moon’ which was accompanied by a great light show for this, and then a slightly older track ‘Dark Star Remix’.

There was an almost filmic quality to the song ‘Forget Me Now’ with two encore tracks – ‘Kind’ was orchestral in scope and ‘Wandering Star’ which brought the proceedings to an end. 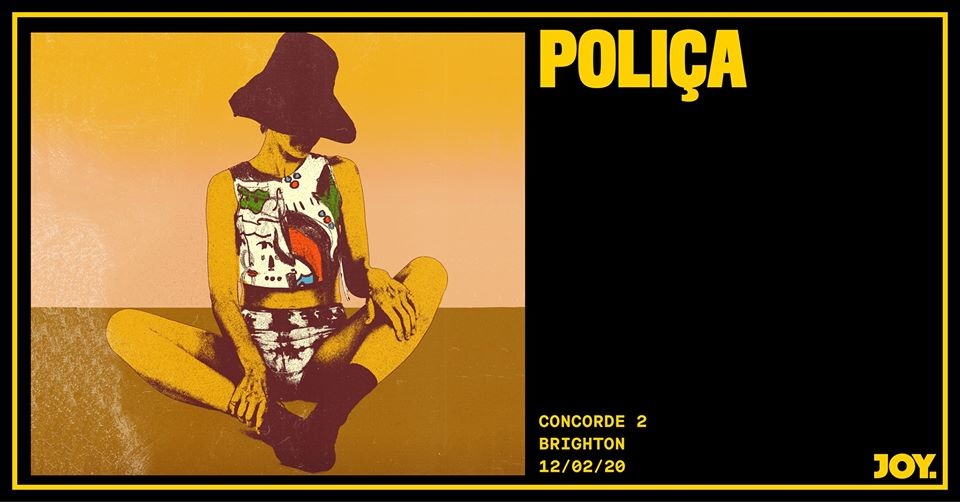 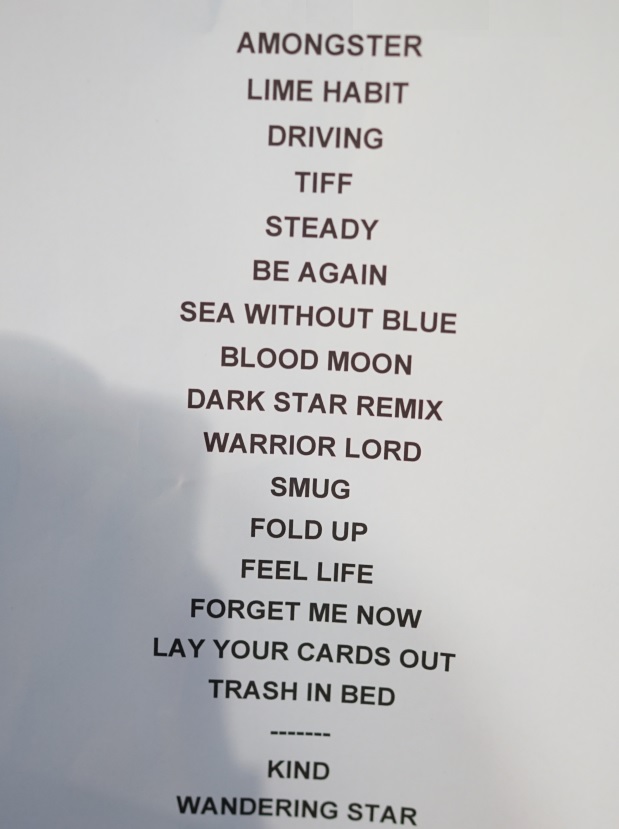