Danny Welbeck has signed a new one-year contract with Brighton and Hove Albion. 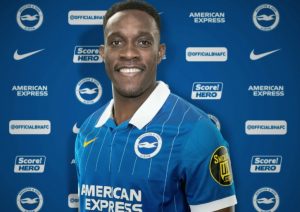 The club said it was delighted and added: “The 30-year-old initially joined Albion in October 2020 on a one-year contract, going on to score six goals and assisting three times in 24 Premier League outings.”

Albion head coach Graham Potter said: “We’re delighted that he’s with us for next season. Danny has demonstrated what is expected of a top professional from the moment he arrived here. As soon as the season finished, extending his stay at the club was a top priority.

“He is a brilliant role model to have around the place and his experience at the very top end of the game is invaluable for helping us continuing to improve as a team.”

The club said: “Welbeck began his career with boyhood club Manchester United, going on to win the Premier League, the League Cup and Community Shield on two occasions, as well as the FIFA Club World Cup.

“He departed for Arsenal in a £16 million move in 2014 where another trophy followed as the Gunners lifted the FA Cup in 2017.

“His time at the Emirates came to an end in 2019, before spending a season with Watford.

“The striker also has 42 England caps to his name, scoring on 16 occasions, and was part of the squad that reached the semi-finals at the last World Cup.”