Golfers were attacked by two men on motorbikes at a Brighton golf course, Sussex Police said this afternoon (Wednesday 7 July). 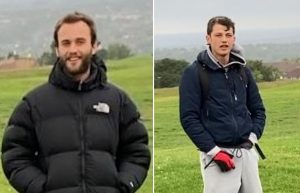 The force published pictures of the suspects and issued a public appeal for help to identify the men.

Sussex Police said: “Police are looking to identify two men in connection with an assault and vandalism at a golf course in Brighton on Sunday (4 July).

“Officers were called to Hollingbury Park Golf Course, in Ditchling Road, Brighton, at around 7.30pm to reports of motorcycles being ridden on the fairways.

“Some golfers who challenged the riders were assaulted, including a man who was punched to the ground and kicked in the head as he tried to get up.

“He suffered a slight head injury and a split lip.

“The riders then churned up the grass by performing doughnuts on the green before riding away.

“Police investigating the matter believe the two men pictured could help with their ongoing inquiries.

“Anyone who is able to identify either of the men pictured, or has any information relating to the incident, is asked to contact police online or by calling 101 quoting serial 1266 of 04/07.