People living in a council-owned tower block in Brighton want action to stop drivers from blocking their visitors’ parking spaces.

Residents of Somerset Point, in Somerset Street, are calling on Brighton and Hove City Council to tackle the unofficial letting of parking spaces there.

They share the car park with neighbouring Warwick Mount, in Essex Place, but believe that some tenants are exploiting a loophole in parking rules.

Now the problem is to go before a virtual meeting of the council’s Central Area Housing Panel next week.

The meeting – of tenant and leaseholder representatives, councillors and housing officials – has been scheduled for Wednesday 18 August.

Residents are concerned that visitors’ parking spaces are occupied by people who have no connection with the block.

And they said that parking enforcement was “inadequate and ineffective”, with the use of virtual permits making it harder to spot “wrongdoers”.

They also said that they had been trying to resolve the issue for years without progress.

The council’s head of housing income, supply and customer service, Ododo Dafe, said that the bays were only meant to be occupied by those displaying a valid visitor permit.

They could also be used by those with an authorised virtual permit issued by the council’s Housing Customer Service Team.

She said that there were numbered bays in the car park that were offered to blue badge holders and council tenants and leaseholders as a priority.

Businesses could rent unwanted spaces but if they were wanted by residents, any business permit would be terminated and offered to a waiting resident. 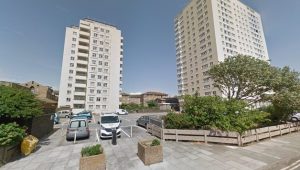 In the housing panel meeting papers, Ms Dafe said: “We had set aside spaces for essential major works, including gas riser replacement works by Southern Gas Networks, that have been carried out at the Somerset Point and Warwick Mount blocks over the past year.

“However, throughout the works, there have been available spaces that residents could apply for.”

Ms Dafe said that the council’s parking enforcement contractor, One Parking Solution, visited the site at least once a day and, on many occasions, more often.

In 2018, residents in Sloane Court raised a similar issue as contractors were using visitor permits but not returning them to residents.

Sloane Court representative Tony McCoy said that his neighbours were “sick” of American Express workers taking up four or five of the seven visitor spaces every day.

At the time, the council said that it rented out bays to Amex workers but would cancel the arrangement if residents demanded more spaces.