Plans to build an extra floor on a family home led to tears from one of the neighbours.

She objected to plans for an extra storey on a property in Tumulus Road, Saltdean, but was upset to learn that neighbours’ opposition was not enough to overturn the scheme.

Six neighbours wrote to the council to object to the plans, criticising the height, design, overshadowing and overdevelopment.

The extra floor would increase the number of bedrooms from four to six.

Planning consultant Mohsin Cooper said that the extra floor would include four bedrooms and a bathroom.

The new plans show two of the existing first floor bedrooms becoming a home office and more living space while the ground floor would remain as a bedroom and garage/storage area.

At the moment, the house sits on a slope below its neighbour but the extra floor would bring it up to a similar height.

Councillor Fishleigh, who represents Rottingdean Coastal ward which includes Saltdean, told the Planning Committee about the call from the neighbour.

The woman said: “Well, we’ve all objected so surely it won’t be granted.”

Councillor Fishleigh said: “I said the recommendation is to grant and she was practically crying and said: ‘How can people I don’t know who don’t know anything about us or our area take the side of a property developer who owns this site over the residents who live nearby?’”

Councillor Fishleigh urged the committee to refuse the application because the house was under offer on a property website.

She said that the new owners could put in an application instead of the one submitted by Ashleigh Phare. 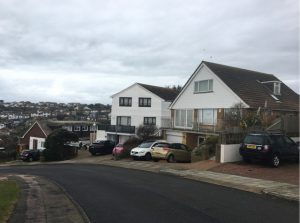 Green councillor Marianna Ebel said that waiting for a sale was not grounds to refuse permission, adding: “We have to make decisions based on planning policy.

“In this case, I think the proposal is acceptable and the recommendation is to grant so it is in line with our local and national policy.”

Green councillor Sue Shanks said that she had thought Councillor Fishleigh was going to suggest the council buy the property “which would be one solution”.

She said: “Often neighbours are upset about overdevelopment. But we have to bear in mind the wider interests of the community and planning policy.”