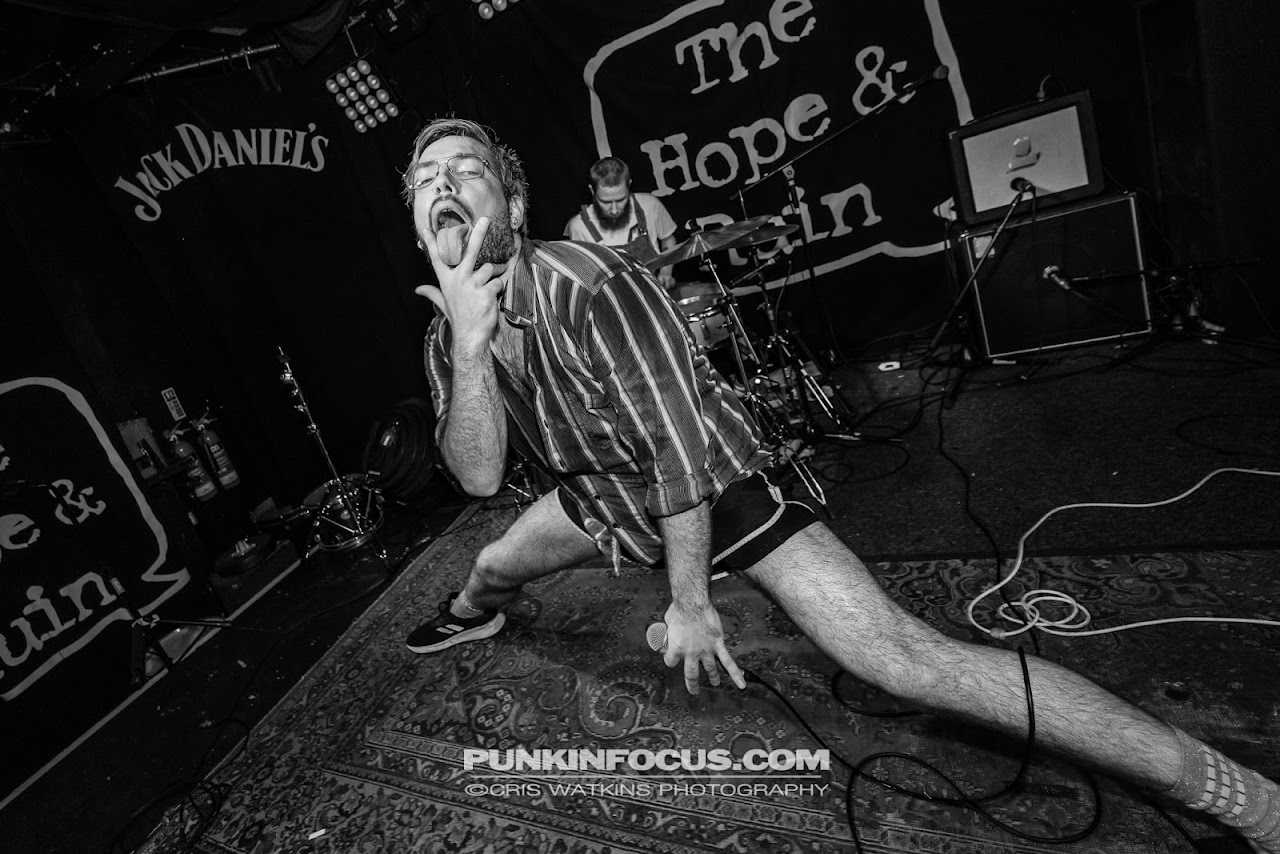 Well I suppose that you have guessed my choice of musical entertainment for last night here in Brighton by the line above! Yes I opted for the latter of the two options!

Clearly I was in a minority last night, having driven part the hordes entering the Brighton Dome who were there to witness an energetic performance by singer, songwriter and multi-instrumentalist, Yungblud, as part of his huge autumn 2021 ‘Life on Mars’ tour, following the release of his sophomore album ‘Weird!’

So you don’t feel hard done by, here are four decent photos taken by Lee Floyd at that Yungblud concert – enjoy! 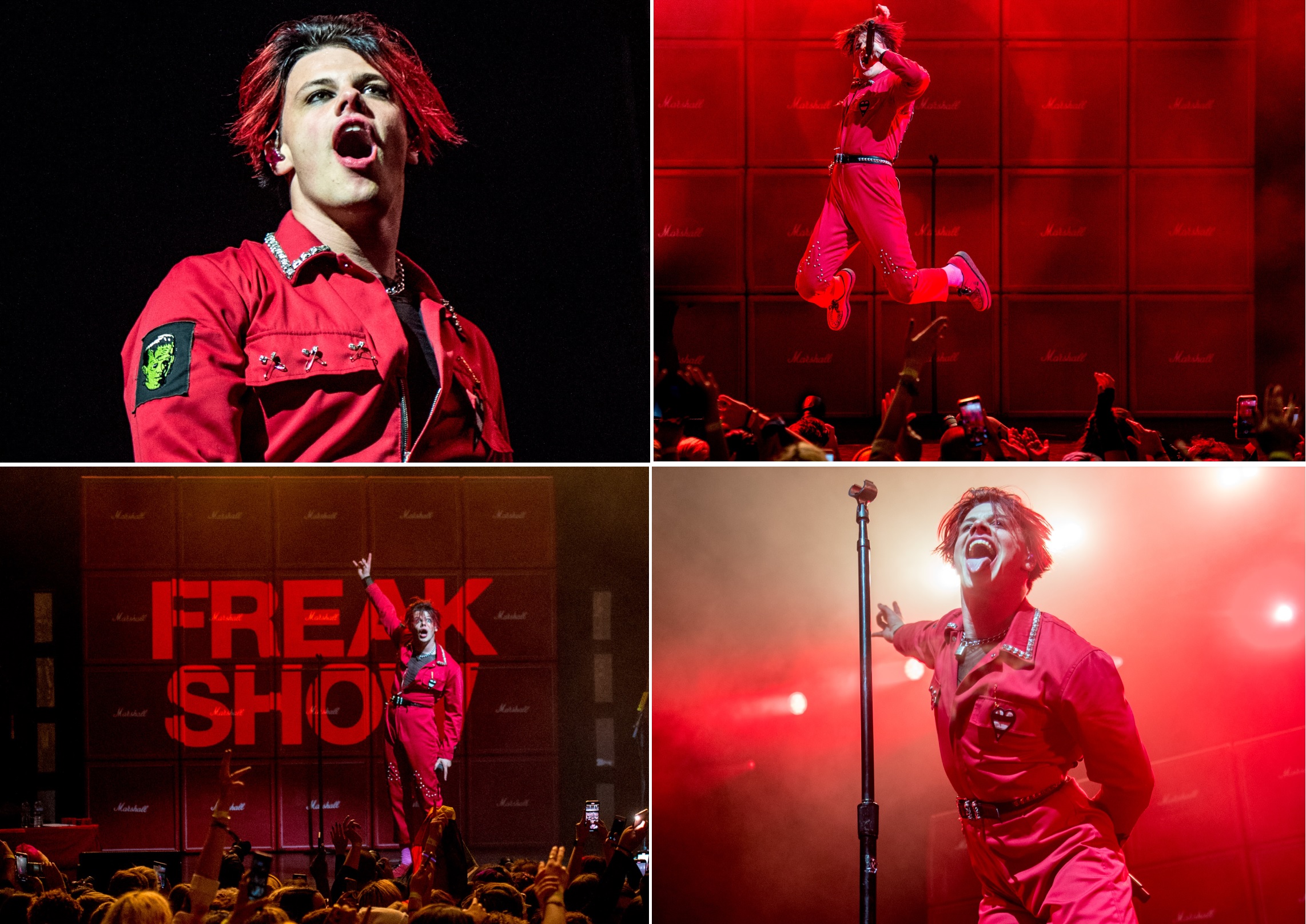 I meanwhile headed up the hill and took up residency at The Hope & Ruin in Queens Road, which was obviously less packed than The Dome concert hall. Our promoter was Love Thy Neighbour who over the past few years has always managed to find interesting and exciting new acts for the Brighton punters and this event was no exception.

We purchased our drinks of choice at the bar and proceeded to head upstairs to the first floor concert room. 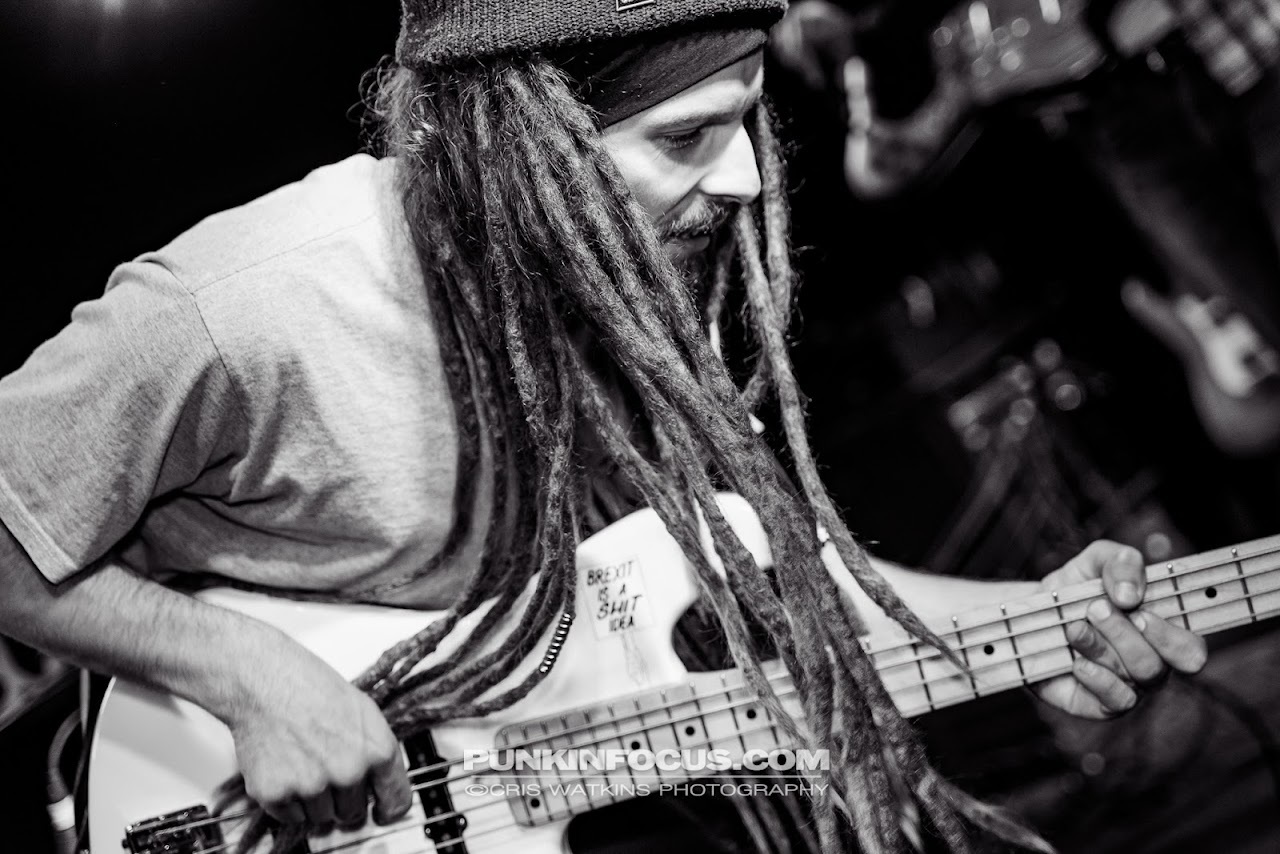 Whizzing up the stairs behind us was the first support band, the Dagobah Sisters. “Dagobah Sisters coming through” they exclaimed as they rushed onto the stage! They were three minutes late, and so at 8:23pm, the loud raw noise began sounding out, accompanied by rasping style vocals. 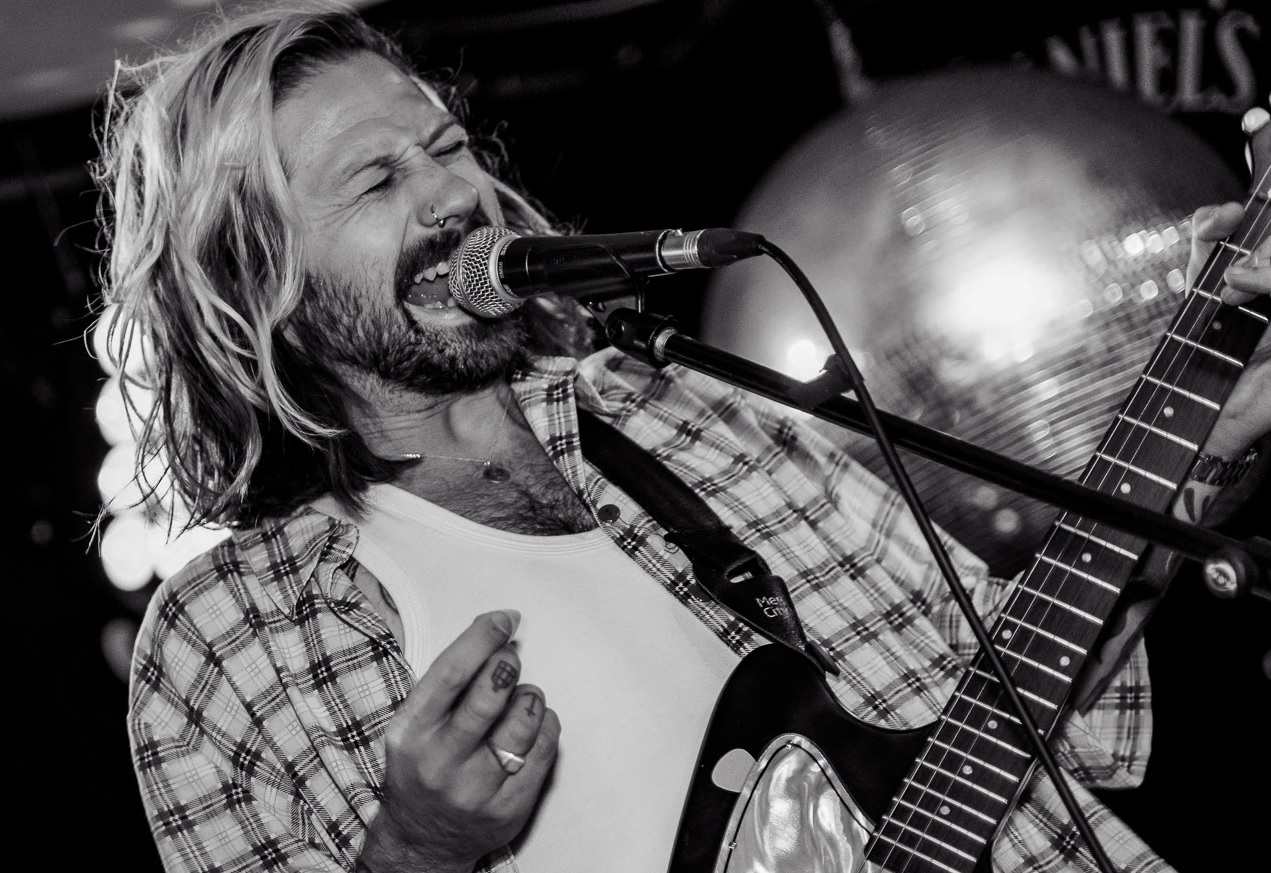 The Dagobah Sisters are actually a trio of guys, namely James Dando (guitar and vocals), Albert Dyba (bass and vox) and Will Amey (drums). It’s extremely unlikely that they hail from the fictional Dagobah planet and eponymous star system that appeared in the Star Wars films ‘The Empire Strikes Back’ and ‘Return Of The Jedi’, but what is certain is that they have taken up residency here in Brighton. This is borne witness by the fact that they have a few fans in attendance and so their American west coast grunge sound is rather well received by them. 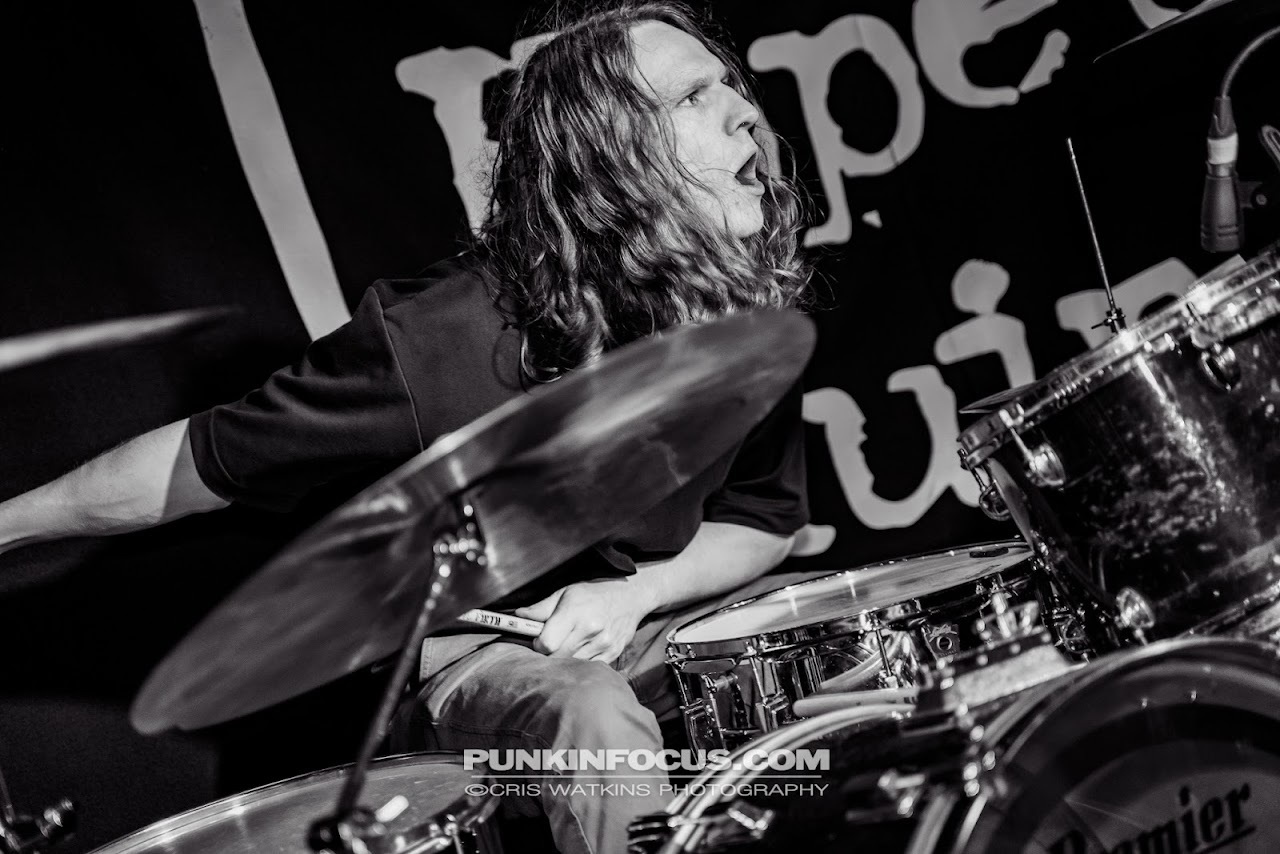 Will Amey from the Dagobah Sisters live at The Hope & Ruin, Brighton 27.9.21 (pic Cris Watkins Photography/PunkInFocus) (click on pic to enlarge!)

The three bands on the bill this evening all had something in common…brevity! In the case of the Dagobah Sisters it was their epic track titled ‘Acid Attack’, which must have ran for at least five seconds! Yep, five seconds! 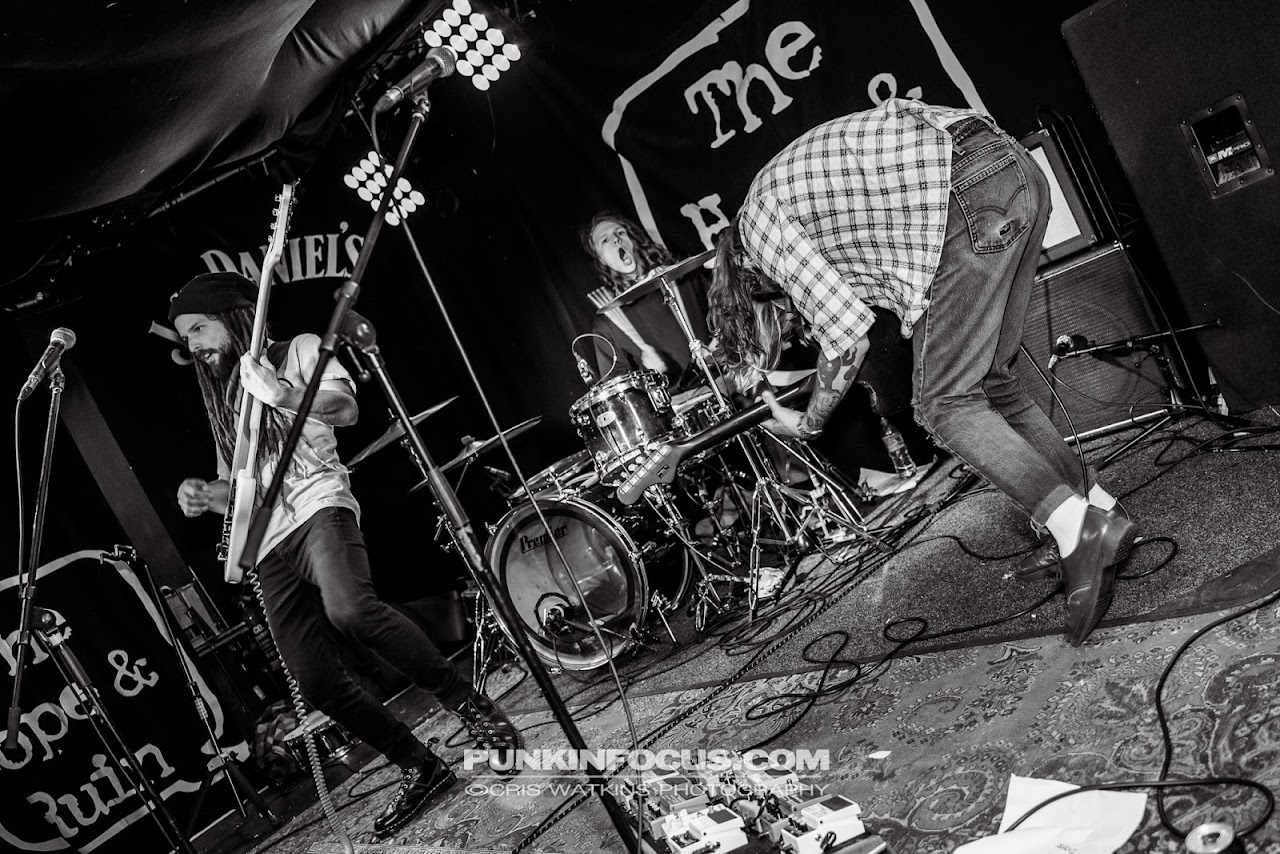 During their 25 minute eleven track set, they performed a track titled ‘Watto’ which was written in homage to the ‘male’ Star Wars character of the same name who was a Toydarian junk dealer/human trafficker and owned a shop in Mos Espa on Tatooine. They also played all four songs found on their 2020 ‘No Fate’ EP, namely ‘Sheep’, ‘No Fate’, ‘Boost’ and ‘Wicker Man’. They ceased fire at 8:48pm. 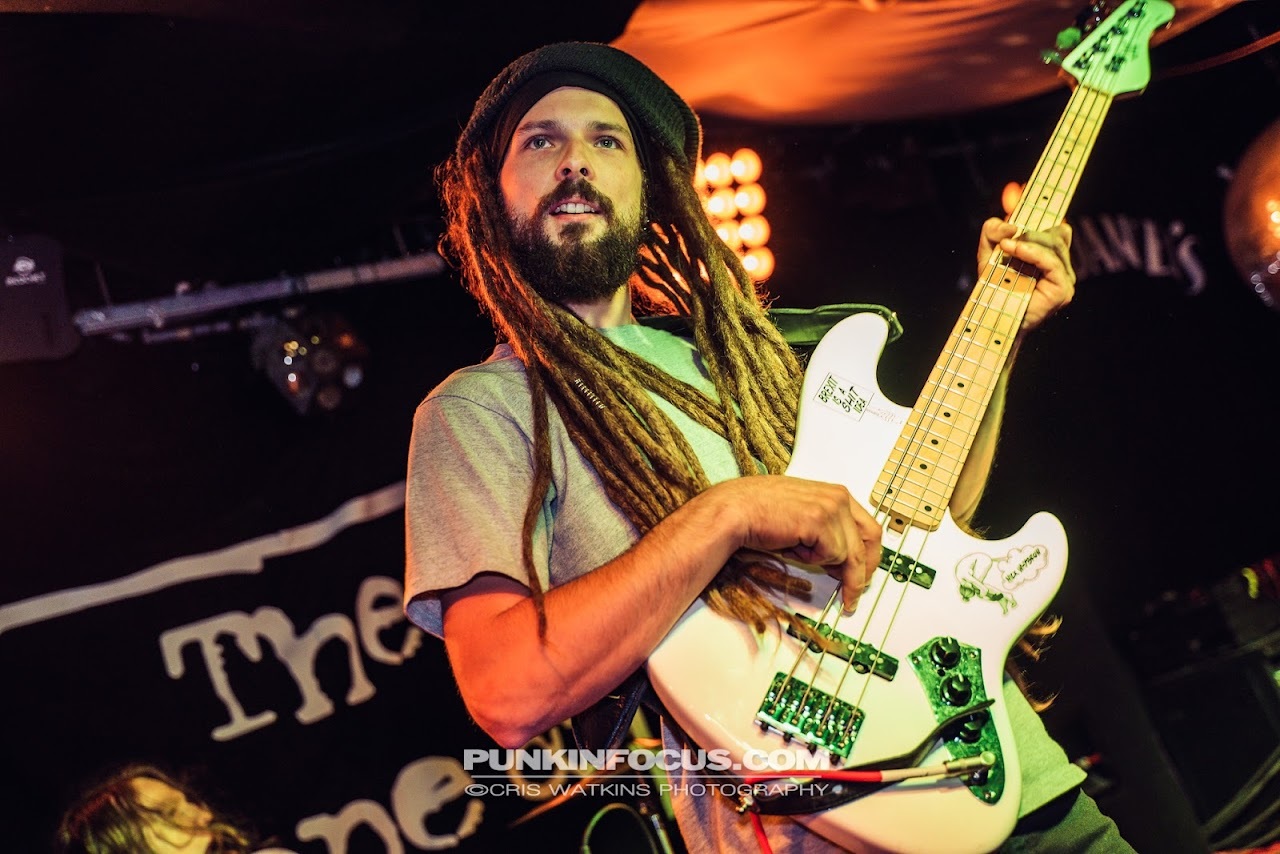 Find the Dagobah Sisters on Spotify. 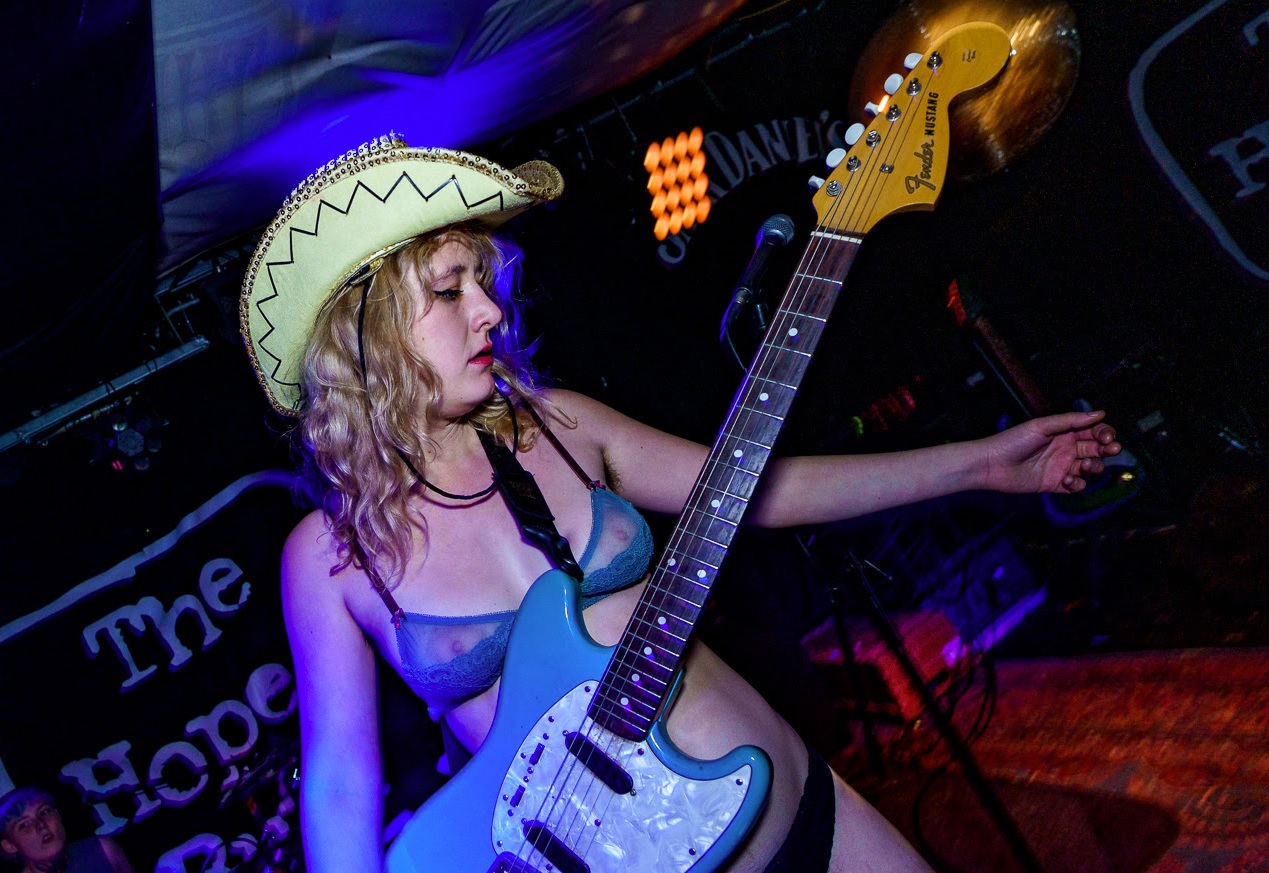 After a pause in live music proceedings of 21 minutes, the next act took to the stage, but with a difference. At 9:09pm stood in front of us were Phoebe Lunny (vocals and ‘the image of a’ guitar), Fox O’Reilly aka Fox Foxington Fox (bass) and Catt Jack (drums…sometimes!). Yes folks, it’s the Lambrini Girls. 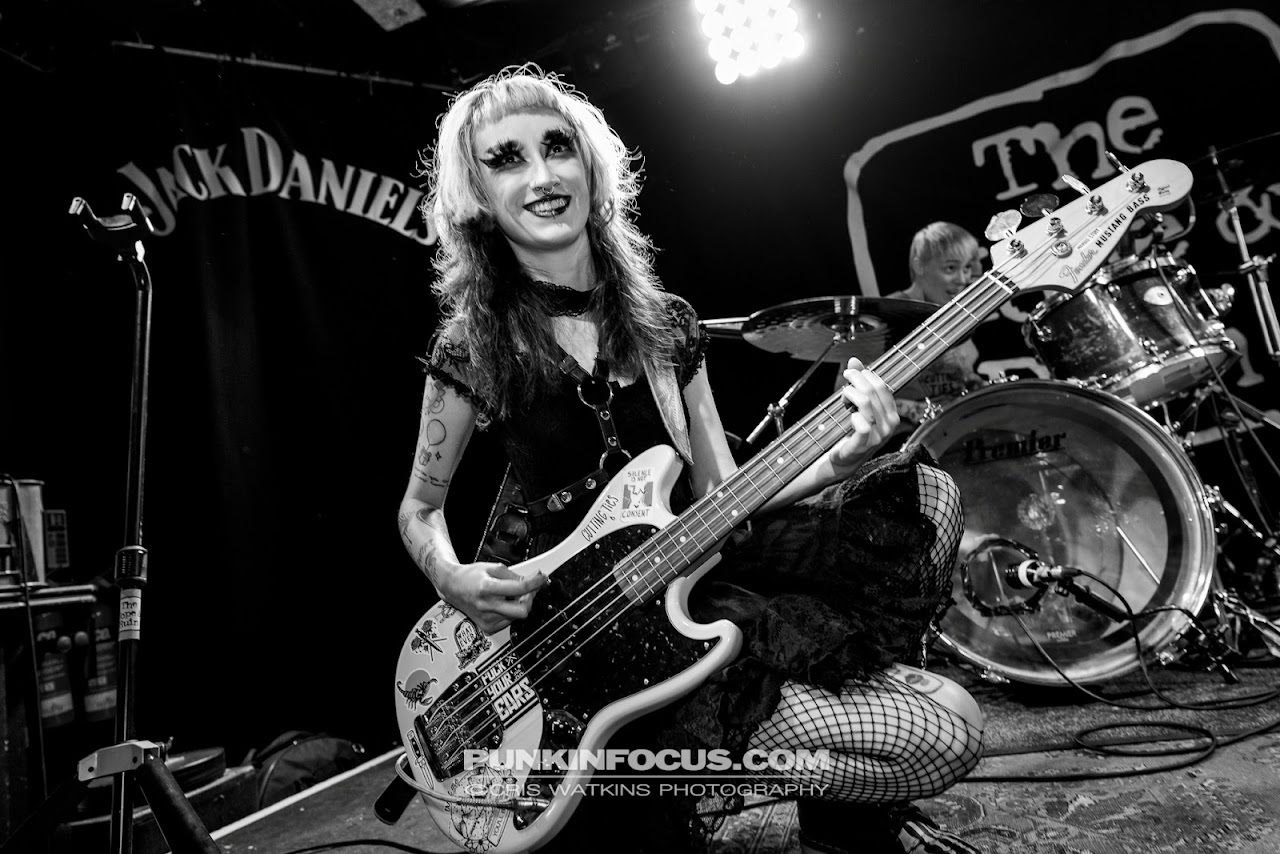 These days it seems that this Brighton based trio are omnipresent. They pop up with such regularity on many of the local bills and the reason for this is they are pure entertainment. For instance, this time around, rather than screeching loudly into the mic and blasting out one of their tunes, the trio were initially rather content to stand there whilst Phoebe held a mobile phone up to the mic so that everyone could hear it playing one of Craig David’s hit songs. This brought a smile to everyone’s faces. 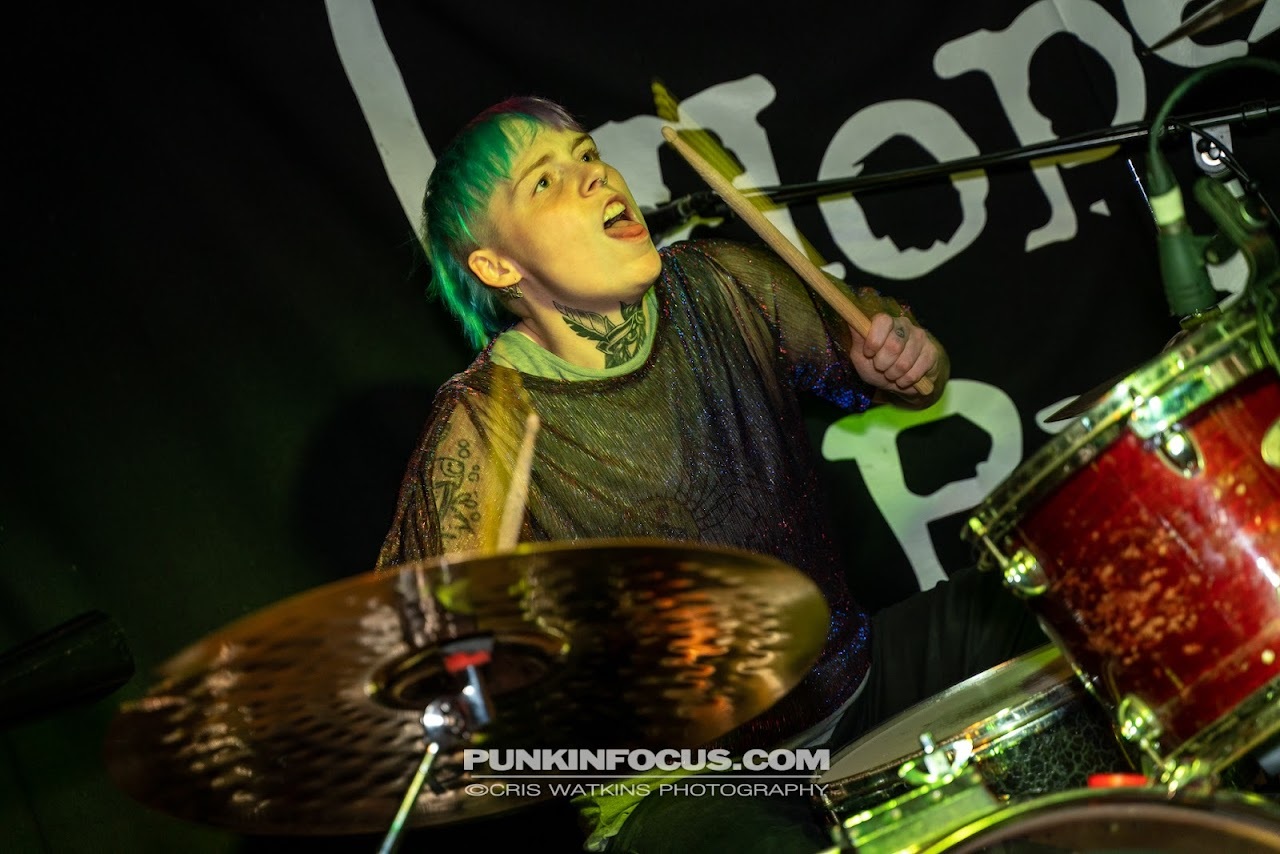 They then did actually launch into their track called ‘Craig David’ after a minute or so and performed six other tracks for us. The Hope & Ruin concert room had been filling up since the Dagobah Sisters performance and it’s highly likely that several punters had arrived solely with the intention of witnessing ‘The Lambrini’s’ 23 minute chaotic live set. 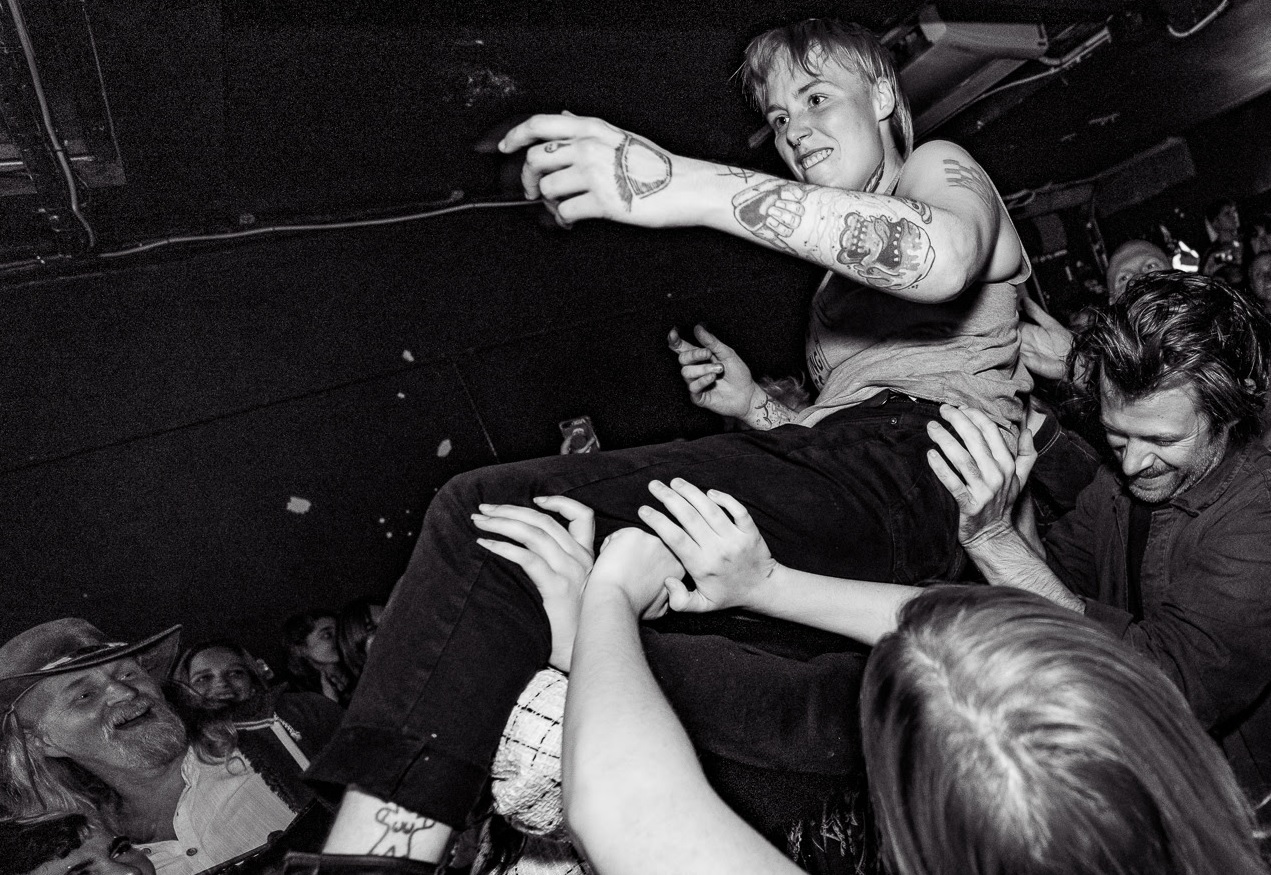 They followed ‘Craig David’ up with ‘Sex Toy’ and Fox’s bass was really rumbling along very nicely here and if it was a synth, you could have likened it to the classic ‘Doctor Who’ theme. It was so prominent in the mix along with Catt’s drums. Hold on a minute, where’s Phoebe’s guitar? She’s clearly playing it, but we can’t hear it and it doesn’t appear to be a loose wire or not plugged in properly. This therefore leads me to the conclusion that ‘the fault’ more than likely is emanating from the other side of the room! Just saying! 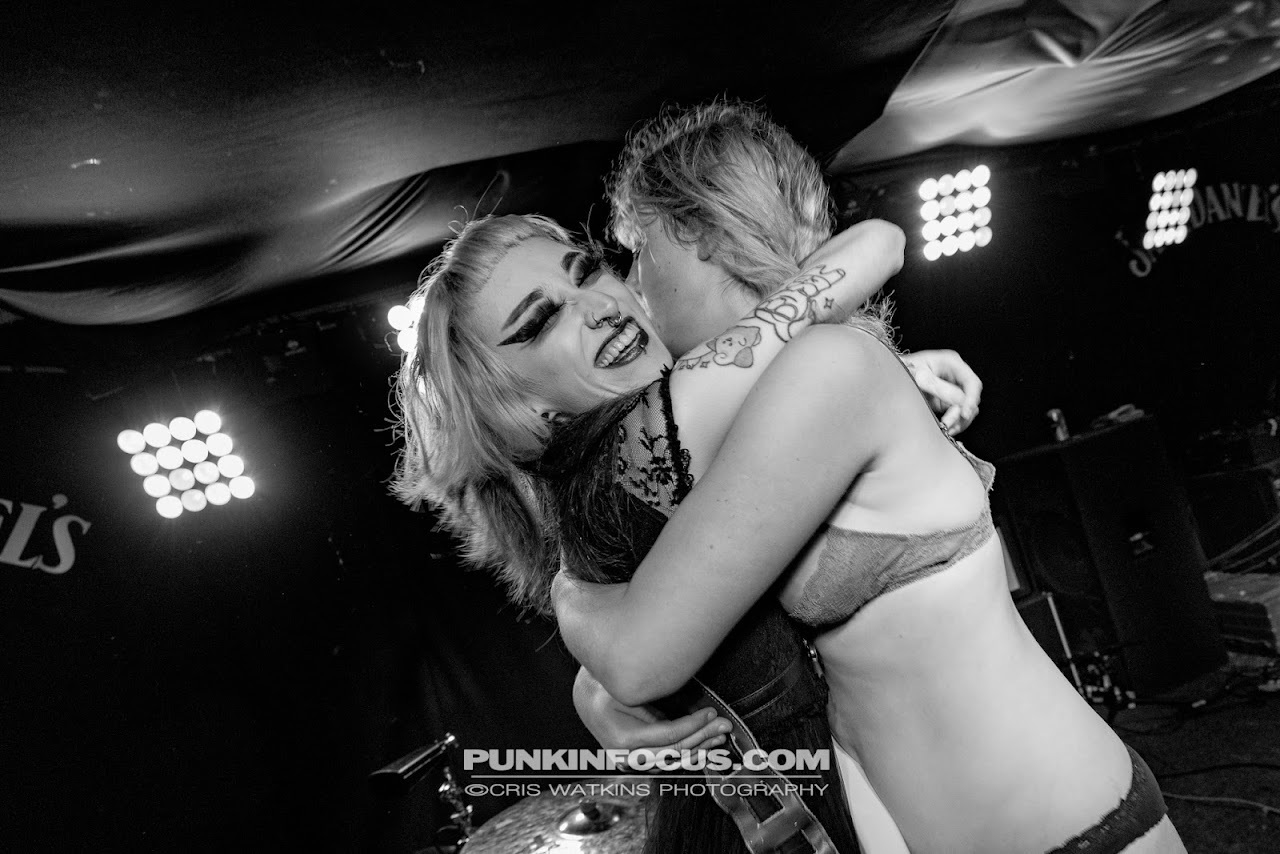 Anyway, back on the side of the room where the stage is and it’s cowbell central on there as Catt gives it a right old good seeing to. On the brevity front, we had ‘Gay Panic’ which lasted something like 20 seconds? Before we know it, their set was closing with arguably their best tune ‘Big Dick Energy’. It’s catchy as f**k!

All of this was as usual interspersed with semi-nudity and crowd surfing! I mean, what’s there not to like? At 9:32pm they vacated the stage to their customary applause. 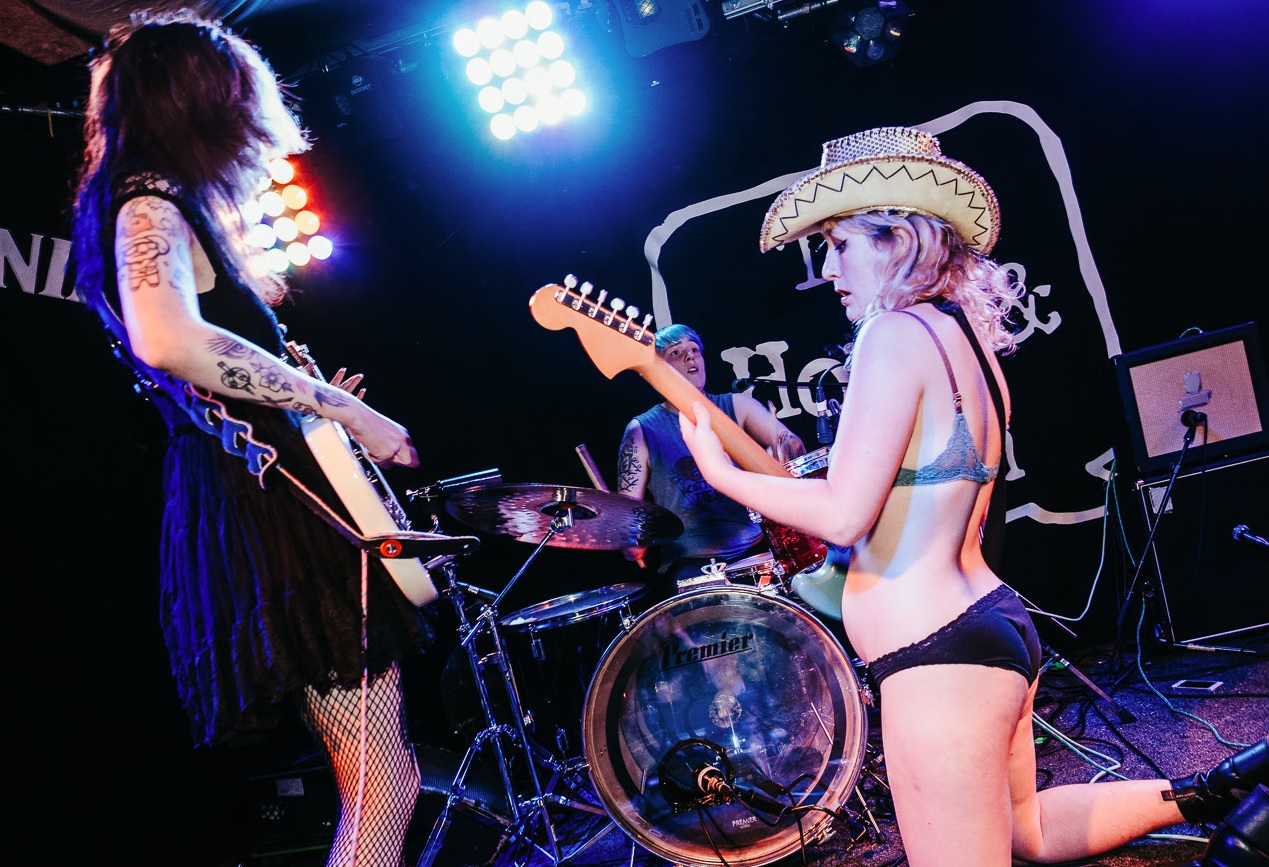 Find the Lambrini Girls on Bandcamp. 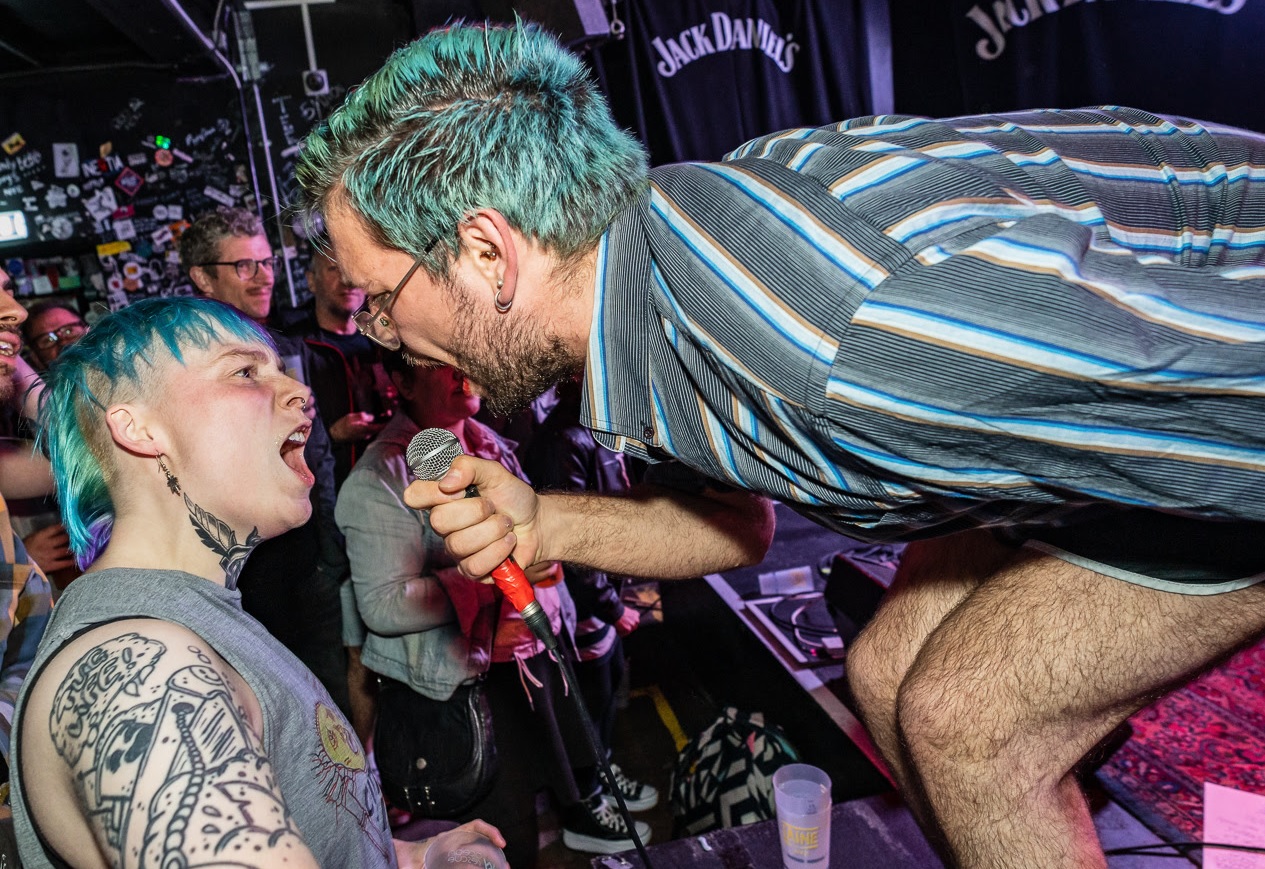 It was time for a little light refreshments and so a trip to the downstairs bar was in order, whilst the 28 minute interval was under way, the headline act Joe & The Sh*tboys. (Yes they do have an “i” in their name) were setting up shop upstairs, as part of their dozen UK date tour.

Bang on 10pm and the band, who have gone down The Ramones names route as in Joe on vocals, Ziggy Sh*t on guitar, Sammy Sh*t on bass guitar and Johnny Sh*t on drums, were ready to go! 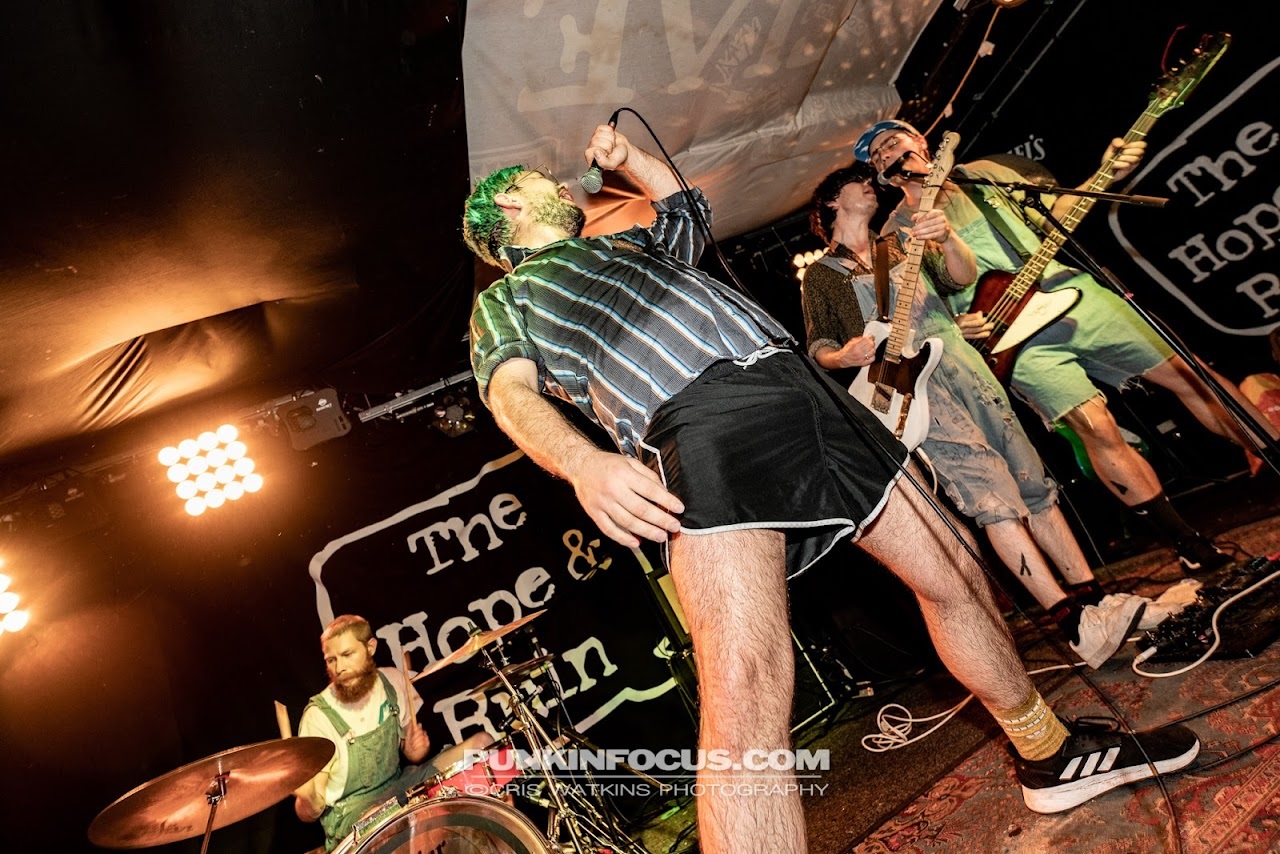 Immediately, blue haired, red lipsticked, frontman vocalist Joe pointed out how were they going to follow that Lambrini Girls set. The baton had most certainly been passed over to Joe and his chums in the blue dungarees. But who exactly are this lot and what do they represent?

Interestingly enough, it transpires that despite Joe’s slight American accent and the band’s ‘overall’ (dungarees) image which historically was championed by farmers, miners, loggers, and railroad workers in the Southern and Midwestern United States, that they actually hail from the dramatic land of the Faroe Islands. This is an autonomous territory within the Kingdom of Denmark and located 200 miles north west of Scotland! 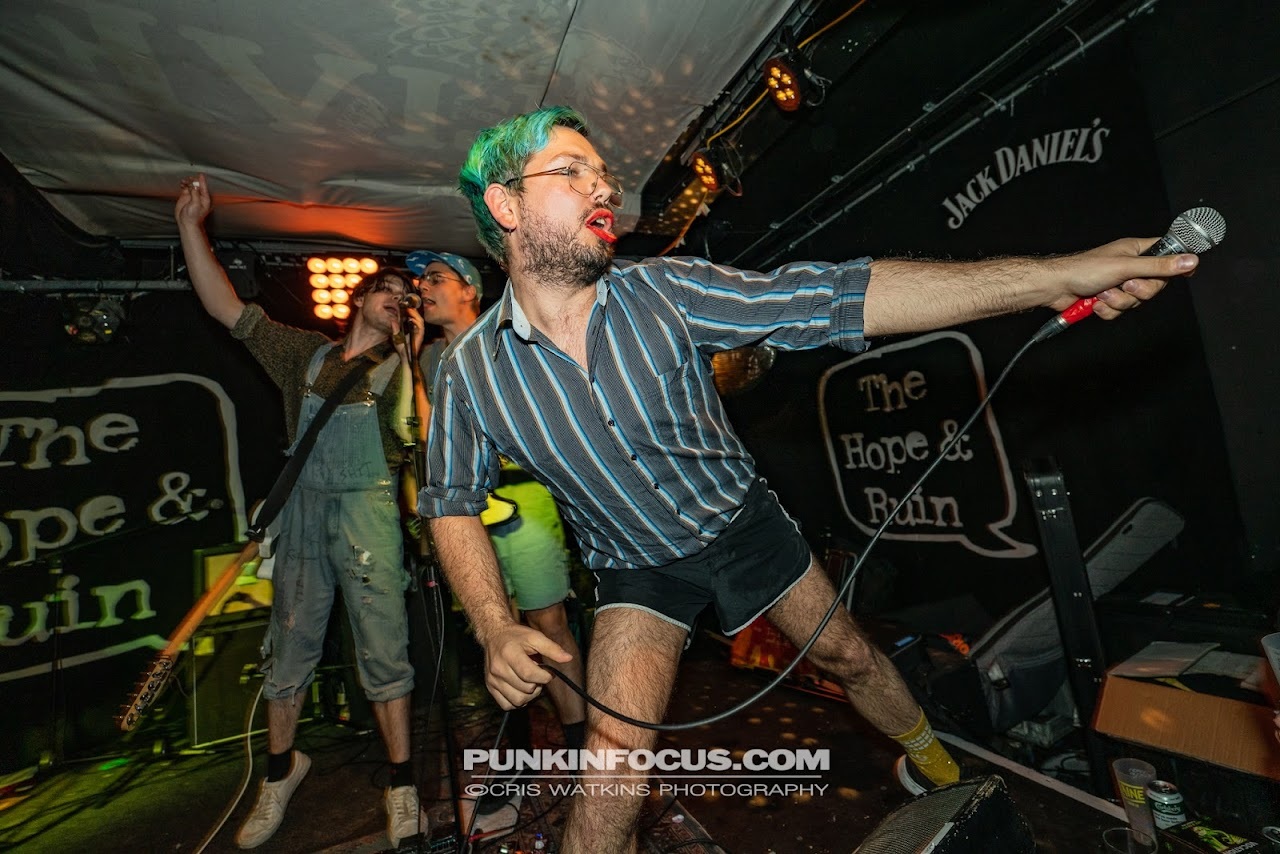 Their modus operandi is that they are bisexual vegans who formed the band with the intention of calling out sh*tty behaviour in the conservative Faroe Islands, where the rock scene is (apparently) filled with boneless homophobes and misogynists, and elsewhere generally. The choice of venue was rather apt as ‘The Hope’ operates a vegan menu. 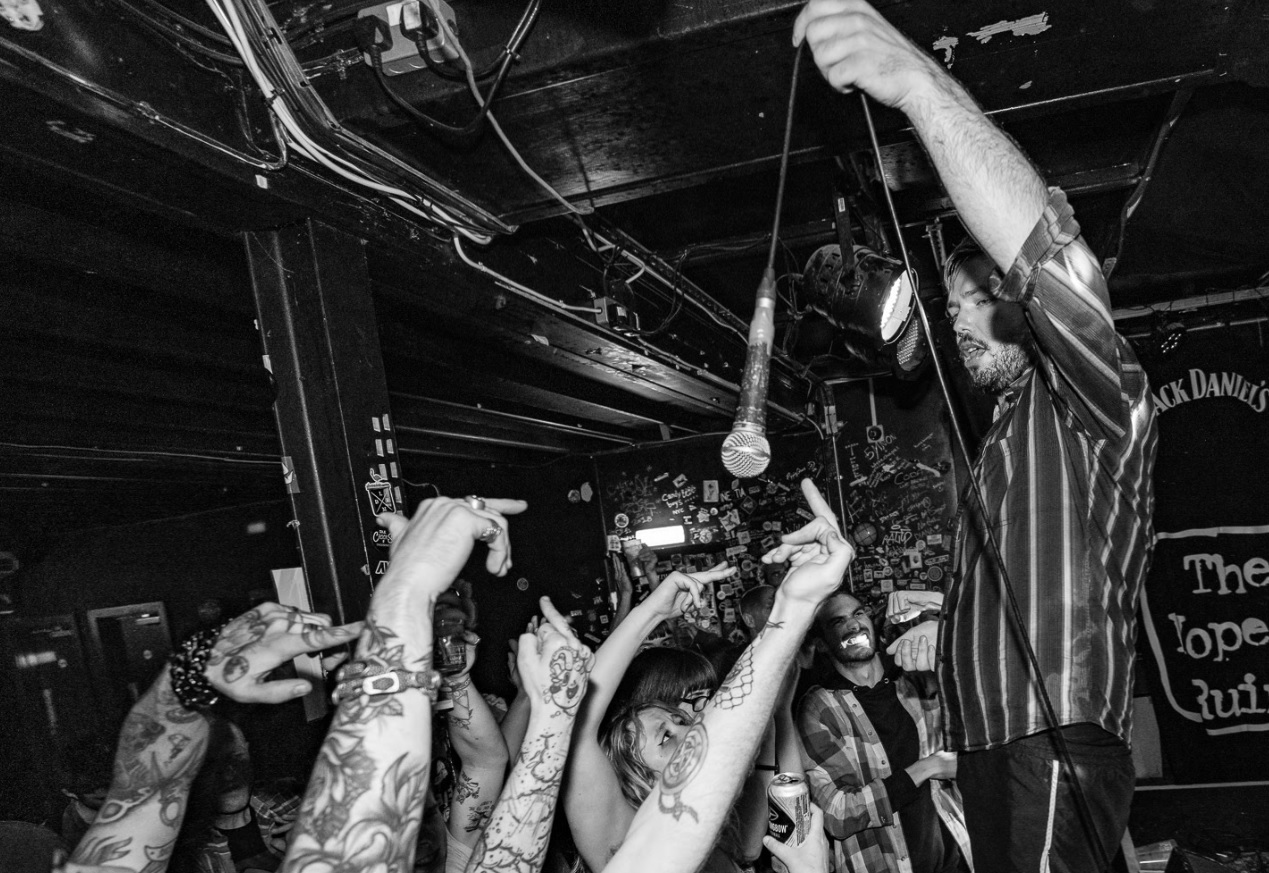 Joe and the crowd at The Hope & Ruin, Brighton 27.9.21 (pic Cris Watkins Photography/PunkInFocus) (click on pic to enlarge!)

We had heard that the Joe & The Sh*tboys live shows have been hailed as being rammed full of energy, with a barrage of trademark sub 120 seconds songs, such as ‘Drugs R’4 Kidz’ (coming in at 61 seconds long), ‘Life Is Great You Suck’ (91 seconds) and ‘If You Believe in Eating Meat, Start With Your Dog’ (just 22 seconds). However, on the Joe & The Sh*tboys brevity front, the award goes to their shortest track which is unbelievably a mere 2 seconds in length and is called ‘F*ck’. All four of these numbers were blasted out at us at The Hope & Ruin, as were no less than 25 others during their frenetic 41 minute set. 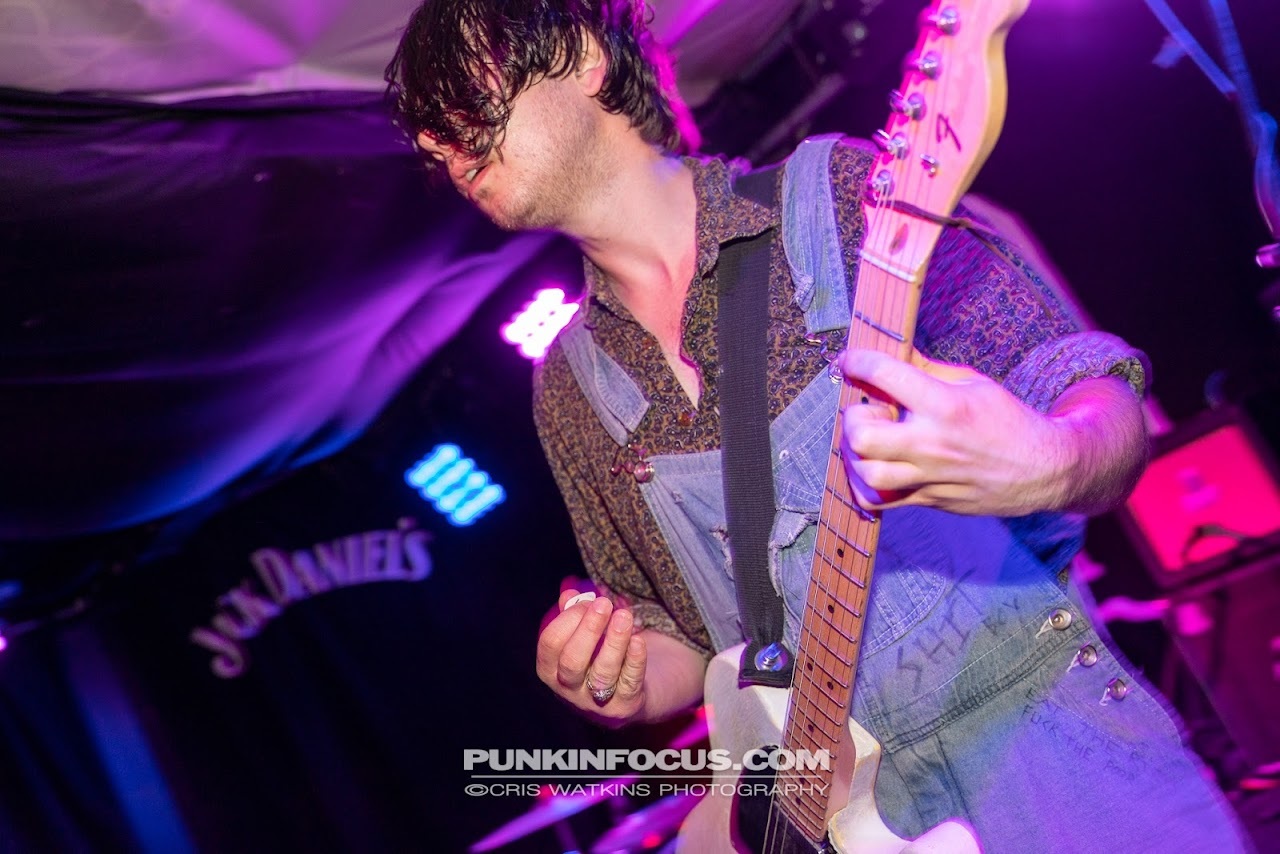 29 songs in 41 minutes is certainly going some, and their compositions whizzed by. Of note was their third tune (and recent single) ‘Pull The Trigger’, with its retro punk sound. The following number ‘Ram Me’ was good too. Other highlights were ‘Don’t Fear The Nipple’ as well as the very recent single ‘Manspredator’. 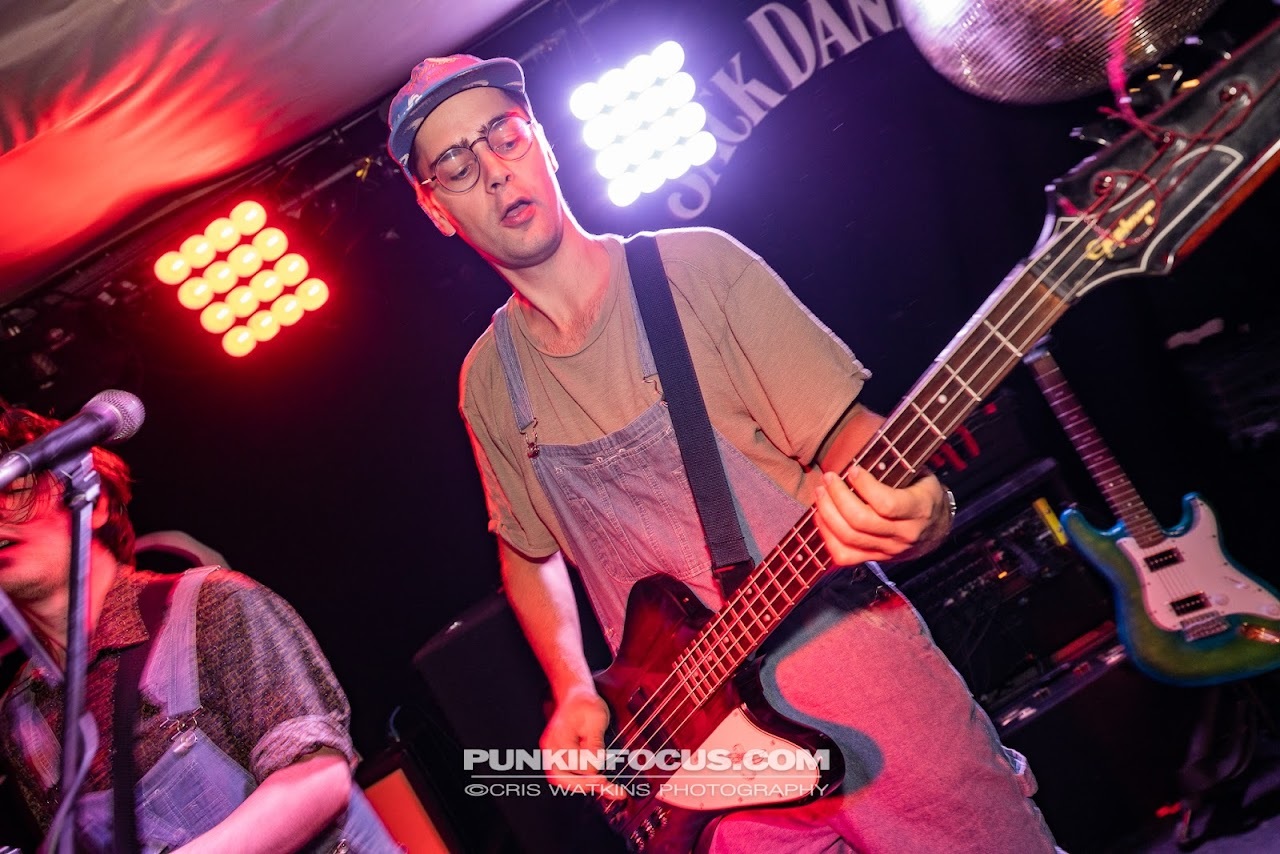 The quartet celebrated bisexual awareness week (from 16th to 23rd September), by releasing yet another single. This one is titled ‘Closeted HomoFObe’ and is from the four-piece’s upcoming second album, ‘The Reson For Hardcore Vibes (Again)’. Joe informed us that YouTube had taken down the video due to its content. 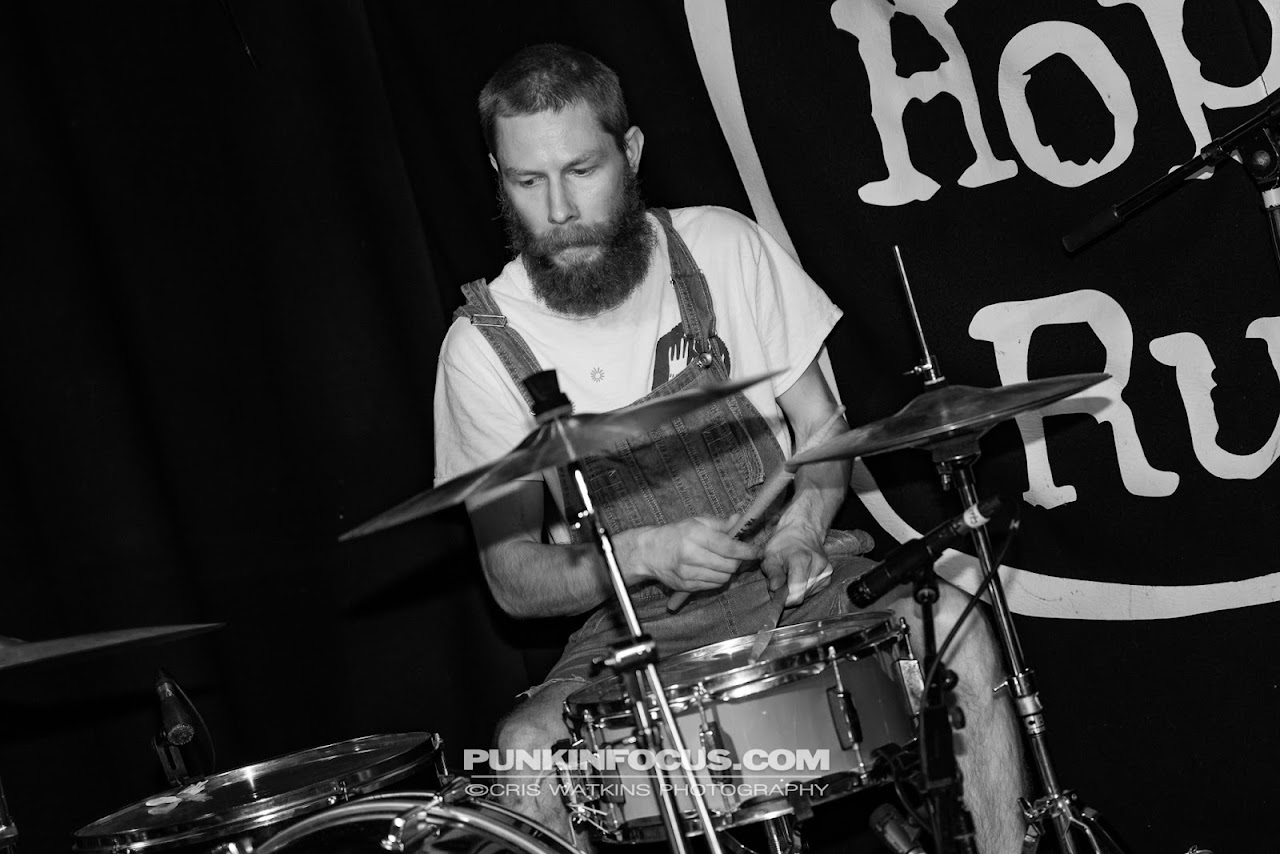 The forthcoming release follows on from their debut 10 track album ‘The Reson For Hardcore Vibes’ which was unleashed to an unsuspecting world on 4th November 2020. In fact the album is so short that the guys have crammed it all onto a 7” vinyl disc. There were 150 white vinyl copies released but they are long gone, but the normal black platter is still available – Purchase/listen to the ‘mini’ album HERE. 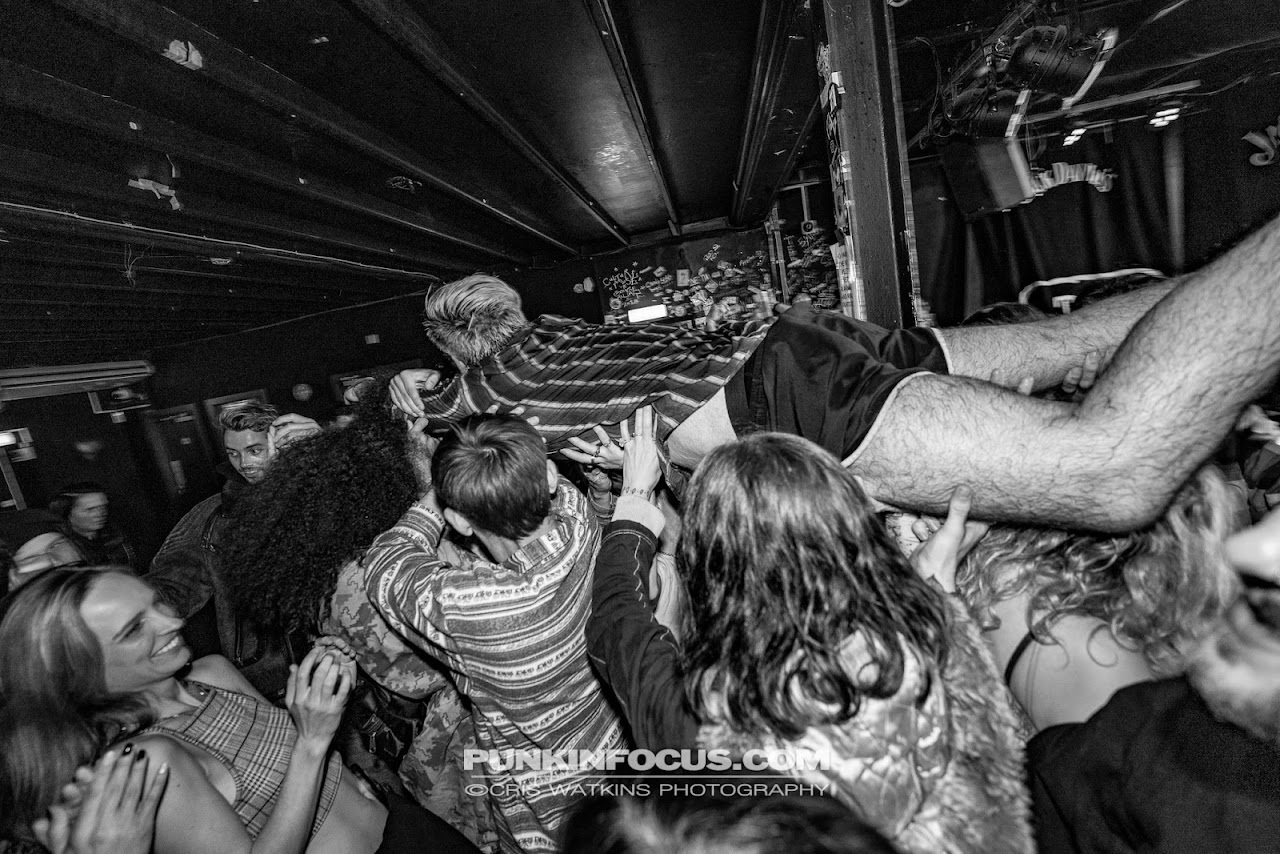 Joe goes for a ride at The Hope & Ruin, Brighton 27.9.21 (pic Cris Watkins Photography/PunkInFocus) (click on pic to enlarge!)

Back at The Hope & Ruin, and as I scanned around the room, I noticed that virtually everybody had a smile on their face. Joe and his pals were on the way to conquering Brighton. We crouched down during a tune and jumped up again like jack-in-the-boxes, as we had previously done for ‘The Brinis’. Thanks Joe – you know why!

There was an element of Dead Kennedys about their sound, but you most certainly would add into that mix Chubby & The Gang and Brighton’s very own Wife Swap USA, for an accurate description.

Biggest smile and chuckle of the set was the announcement of ‘If You Believe In Eating Meat Start With Your Dog’. At 10:41pm, they were done! Another decent night out and a successful concert put on by Love Thy Neighbour promoters. 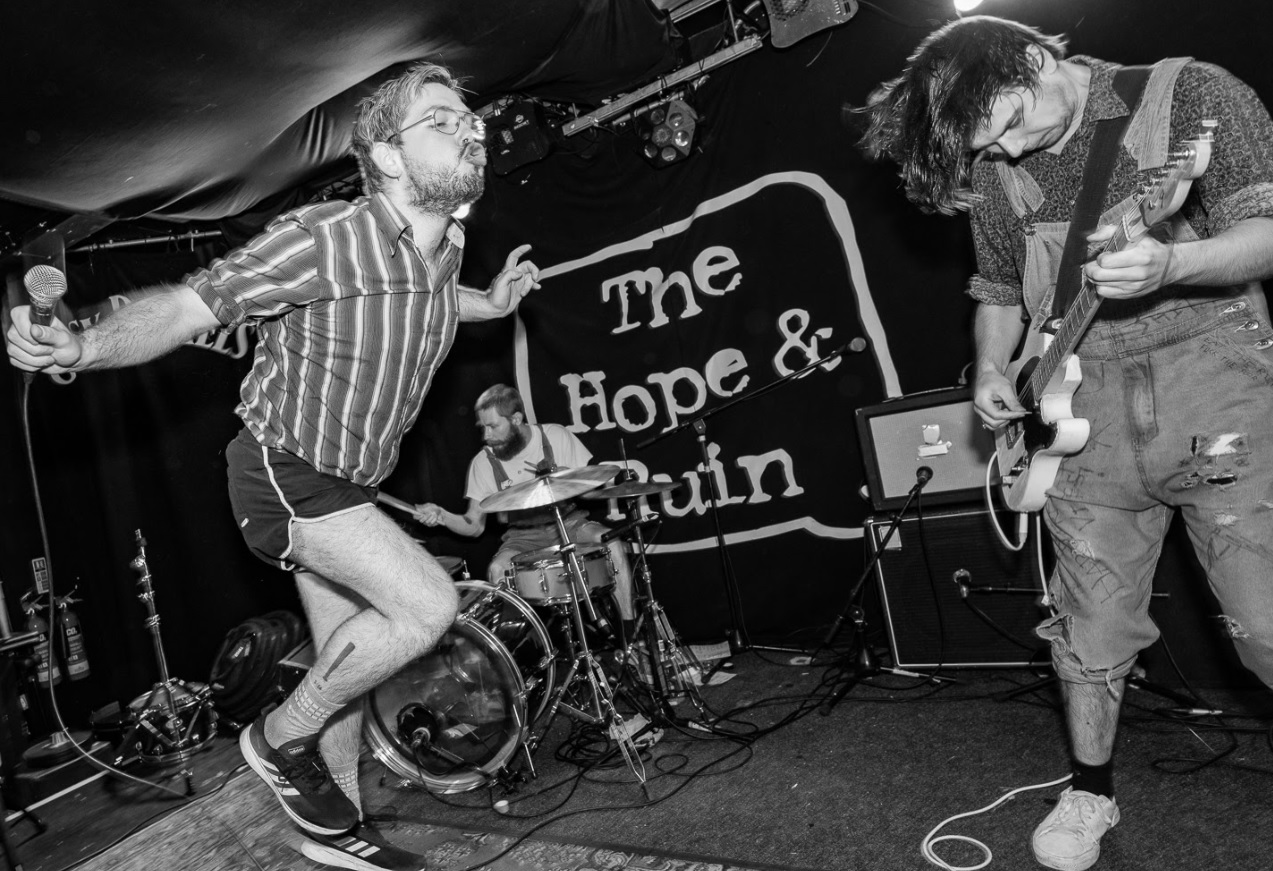 Joe & The Sh*tboys setlist:
‘Intro’
‘The Reson For Hardcore Vibes’
‘Pull The Trigger’
‘Ram Me’
‘Drugs R’4 Kidz’
‘If You Wanna Be A Cuck I’ll Be Your Bull’
‘The Revenge Of The Vandalizer’
‘Please Seek Help’
‘An Ode To Sh*theads’
‘Macho Man Randy Savage’
‘Save the Planet You Dumb Sh*t’
‘Eat Ass You F*cking Cowards’
‘Don’t Fear The Nipple’
‘Pointless Vandalist’
‘f*Ck’
‘Manspredator’
‘Good Ol Days’
‘Personal Space Invader’
‘Life Is Great You Suck’
‘Kill Your Darlings’
‘Wonderwall’
‘F*ck Everybody’
‘Your Product Sucks’
‘If You Believe In Eating Meat Start With Your Dog’
‘Closeted HomoFObe’
‘Pretend Serious’
‘Mr. Nobody’
‘Theme’
(encore)
‘Sleep Now In The Fire’

Find Joe & The Sh*tboys on Bandcamp. 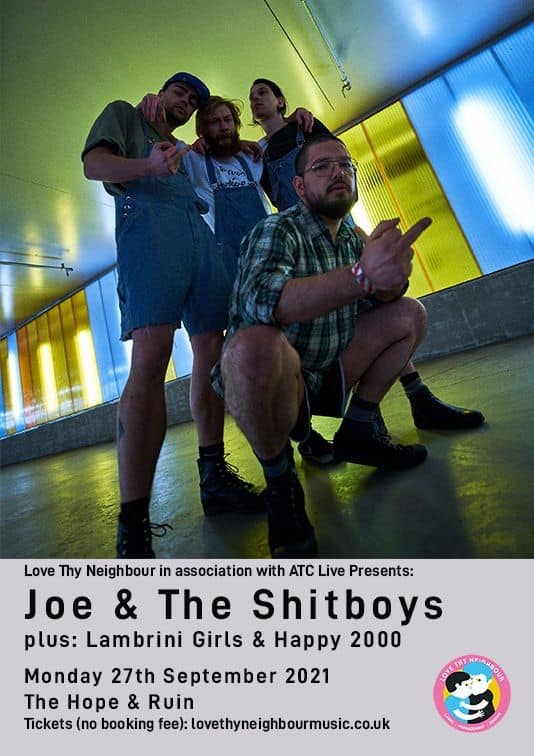 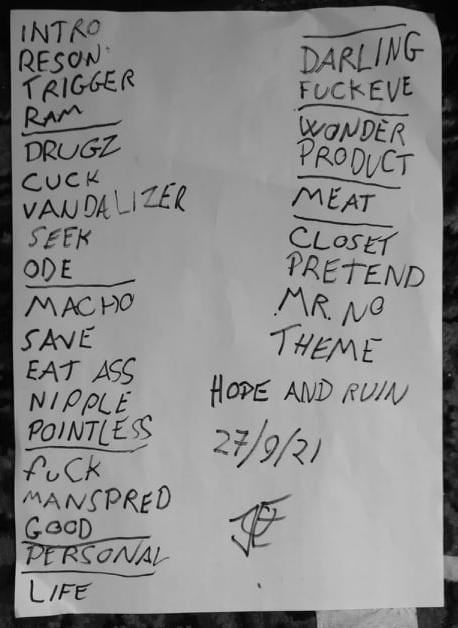 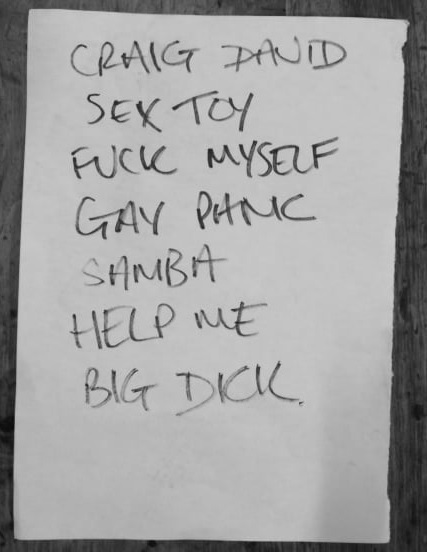 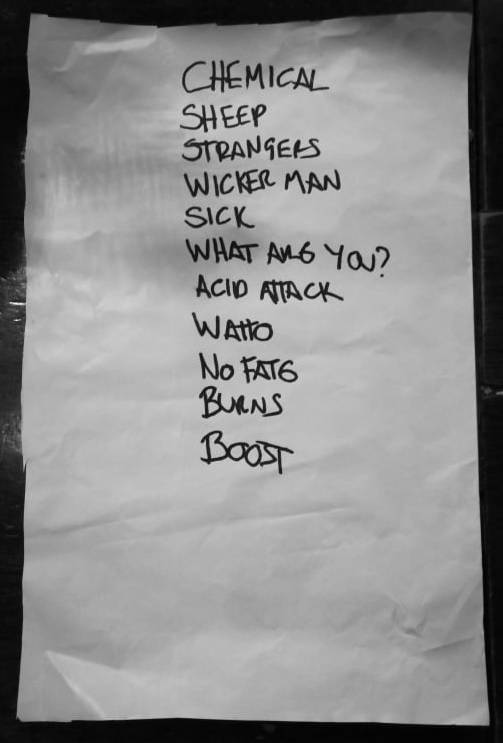 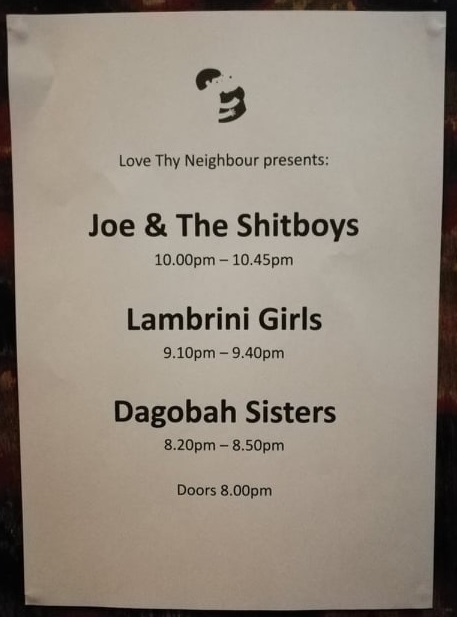