A councillor has called for an independent assessment of changes to the road layout in Valley Gardens in the centre of Brighton.

Independent councillor Bridget Fishleigh said that the review should be carried out by a traffic consultant who was “genuinely independent”.

She plans to seek support for the move at a Brighton and Hove City Council meeting on Thursday next week (16 December).

Councillor Fishleigh intends to propose a motion at the meeting of the full council and said that everything previously assumed about the Valley Gardens scheme had changed because of the coronavirus pandemic and Brexit.

She said that the final stage – phase three – was the most controversial, with plans to remove the roundabout at the Palace Pier and replace it with a T-junction.

The first two phases came under fire recently when it emerged that thousands of people had been fined every month for going into new bus lanes.

In October alone, more than 9,000 drivers were fined after being caught by one of four bus gates – an estimated one every two minutes during the day.

Councillor Fishleigh said: “The city has experienced many unintentional problems brought about by unmonitored assumptions and miscalculations.

“Notably, the remodelling of North Street has directly contributed to making it one of the 10 most polluted roads in the UK, damaging the health of residents and visitors alike.

“Displaced traffic and punitive fines are causing distress and hardship to residents, visitors, workers and business owners. These have resulted from the poor planning and implementation of phases one and two.”

She said that problems with phase three included

Business owners and residents created the Valley Gardens Forum to share their concerns with the council.

These have included cutting off the east of the city centre and the effects of a T-junction replacing the Aquarium Roundabout. 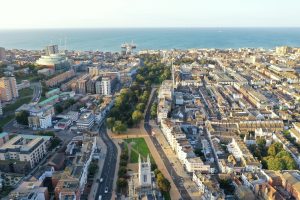 Councillor Fishleigh’s motion said: “Valley Gardens phase three will happen but it is our responsibility to ensure that the scheme is implemented in the way that works for all users – and that there are no oversights or unintended consequences.”

She wants an independent consultant to meet “stakeholders” to hear their concerns and produce a report for a future meeting of the full council.

Independent councillor Tony Janio, who was formerly the leader of the Conservative group, is expected to second Councillor Fishleigh’s motion.

The full council meeting is due to start at 4.30pm at Hove Town Hall on Thursday 16 December. The meeting is scheduled to be webcast on the council’s website.