Fewer than two in five homes in Brighton meet the recommended Energy Performance Certificate (EPC) rating of “C”, according to research published by a national house-buying business.

Just 36 per cent of Brighton homes make the grade, reflecting in part the age and condition of the area’s housing stock.

In a table ranking Britain’s 31 biggest towns and cities, only five were below Brighton which was ranked joint 23rd.

The EPC scale is ranked from A to G to measure the efficiency of a property based on the level of its emissions, its potential heat or energy loss and its likely fuel costs.

The Open Property Group said that just 40 per cent of homes in England met the recommended EPC rating of “C”.

The company said: “Currently, 63 per cent of properties in the City of London meet the EPC rating of ‘C’ or above.

“This is closely following by Salford, which has 58 per cent of properties meeting the recommended energy rating.

“At the other end of the scale Birmingham was ranked last, where only 31 per cent of homes meet the target energy rating.

“Both Stoke-on-Trent and Lancaster also fell below the nationwide average with 32 per cent and 33 per cent of their properties respectively scoring an EPC rating of ‘C’ or above.”

Brighton and Hove City Council has set aside funding to “retrofit” homes to enable them to use more renewable energy while becoming more energy-efficient and retaining heat better.

The council is also working with the Brighton and Hove Energy Services Co-operative (BHESCo) to help people save on their energy bills as gas and electricity prices soar.

The government wants all rental properties to meet a compulsory energy performance certificate rating of band “C” on new tenancies by December 2025.

The Open Property Group’s managing director Jason Harris-Cohen said: “The government is proving relentless in its quest to be carbon net zero by 2050.

“Landlords are seen as a soft target and raising the bar in terms of EPC standards feels somewhat unfair. 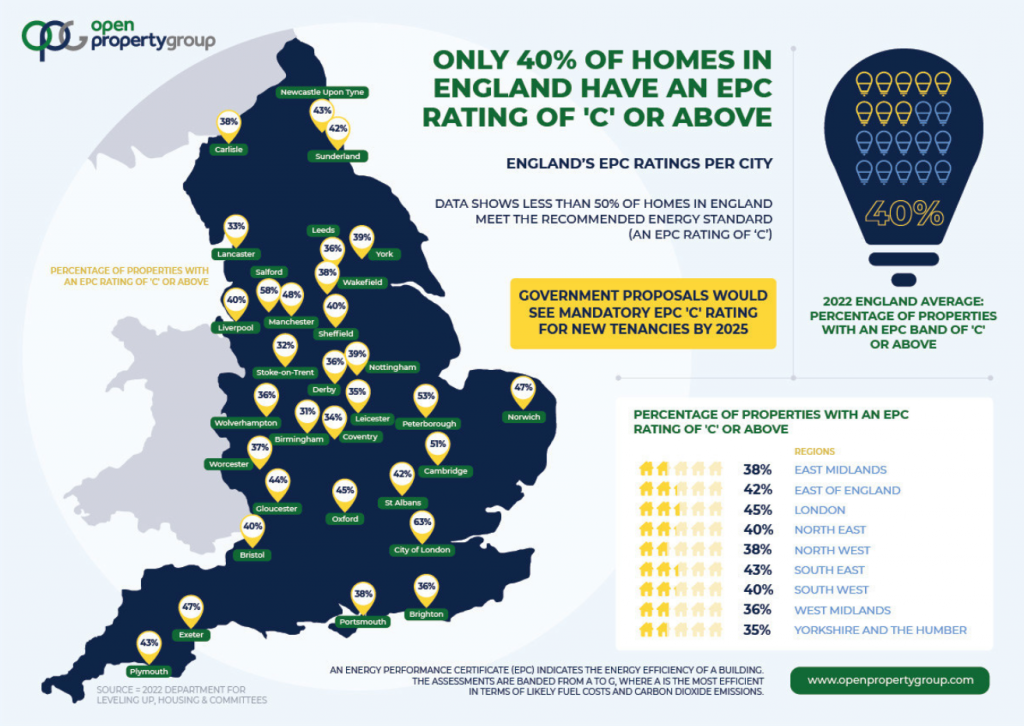 “Sadly, the energy efficiency measures required in the near future are the most expensive.

“Landlords will seriously have to look at their yields when it comes to profits, margins and financing energy-efficiency works.

“Some of the UK’s biggest cities – Leeds, Birmingham and Brighton – have some of the biggest issues with poor EPC ratings.

“Once the sums are done, many landlords will find they won’t be able to recoup any eco investments, especially if their local area can’t tolerate increased rents.

“The UK’s ageing housing stock also presents an issue, with period and pre-war properties falling short when it comes to EPC ratings.

“We forecast a trend towards investing in new homes, especially given that data released by the government showed that 97 per cent of new homes delivered in the second quarter of 2021 had an EPC rating of C or above.”