A Brighton man is being hunted by police so that he can be returned to prison, Sussex Police said yesterday (Friday 2 December). 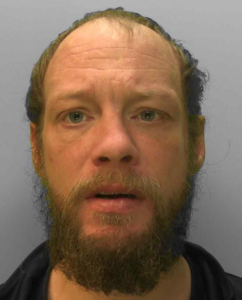 Police issued a public appeal for help finding 38-year-old James Jeater who has been in and out of prison over the past few years for a series of offences.

The force said: “Police are searching for James Jeater who is wanted on recall to prison.

“Jeater, 38, of no fixed address, is on licence after serving a sentence for possession of an offensive weapon.

Jeater, also known as James Jest, was jailed for six months by Brighton magistrates in August after he admitted having a steak knife in public in Gloucester Road, Brighton, in April.

The bench said that Jeater, formerly of Glenwood Lodge, Grand Parade, Brighton, was jailed because the offence was so serious that only a custodial sentence could be justified.

He was given the “mandatory minimum term for a second offence of possession of a bladed article”.

Jeater was also jailed for two weeks for breaching a restraining order in July by going to Hampshire Court, in Upper St James’s Street, Brighton, where he used to live.

And he was given another two weeks for using threatening, abusive or insulting words or behaviour towards a transgender woman.

The restraining order had been imposed in June last year when Jeater was jailed for 10 weeks after he admitted assaulting a woman in Hampshire Court a few days earlier.

He also damaged the wall at her property and the prison term was part of a 24-week overall sentence imposed at the same hearing.

Brighton magistrates also jailed Jeater for assaulting someone in the Co-op, in Blatchington Road, Hove, in April last year.

On the same day he assaulted a police officer twice and a police community support officer when he was arrested in George Street, Hove, when Jeater admitted being drunk and disorderly.

He had already been sentenced to 20 days rehabilitation and an alcohol treatment programme as part of a 12-month community order in October 2019 at Brighton Magistrates’ Court.

Jeater, formerly of William Collier House, in North Road, Brighton, was sentenced for attacking the same man twice in three days and damaging his shop window in St James’s Street.