100,000 took to Brighton’s streets for the Tour of Britain

The Tour of Britain’s visit to Brighton has been hailed a ‘massive success’, by the city council, which estimates 100,000 people took to the streets to watch. 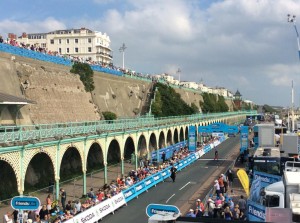 The seventh stage of the international cycle race finished on Brighton seafront on Saturday afternoon (September 13), after a 225km race from Camberley, Surrey, through West and East Sussex.

Cheering crowds lined the route in Brighton. Riders arrived in the city via Ditchling Beacon, taking in Coldean Lane, Lewes Road, Bear Road, Wilson Avenue, Marine Parade and a sprint finish on Madeira Drive. The council says around 50,000 gathered on the seafront, with 50,000 more elsewhere on the route.

“It’s too early to be sure of its impact on the economy and the adding-up hasn’t yet been done. We’ll get a report in coming weeks from the organisers on the likely impact. Based on previous events each stage was generating about £3m.

“But we estimate 100,000 people were on the route and the seafront. So we’d expect a substantial amount of extra spending in local shops, bars and restaurants. The city centre was certainly very busy afterwards.

“There’s also a very large but unquantifiable financial value from the television exposure. Coverage included lots of information about the city’s attractions and that would have cost millions if you purchased it as advertising. The great weather meant the seafront looked fantastic on TV. Overall it was a massive success and the organisers were extremely pleased too.”