Eco-campaigner and Green council candidate Tom Druitt has voiced his “relief” after another endangered healthy elm tree looks set for a reprieve. 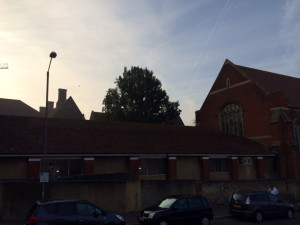 Tom Druitt spoke passionately at the meeting, and was thrilled when the application was turned down to save the tree.

He said: “I am hugely relieved that councillors made the right decision and helped to keep a healthy elm tree for the benefit of the school, pupils and the wider community.

“This was a very rare elm and its loss would have sent all the wrong messages about the importance of protecting our environment especially to young people.

“Thank you to everyone who voiced their concerns and thank you to the councillors for making the right decision when so many factors need to be weighed up a planning decision.

“It may seem to be about just another tree but this is an important and extremely welcome decision for the whole city because of what it demonstrates about local attitudes to protecting the environment.

Mr Druitt, who will stand in the Regency ward in next May’s local elections, previously helped save an elm at Brighton’s Seven Dials roundabout in March 2013 from being felled to make way for a new road layout by living in it for a couple of days.

Tom encouraged people to lobby councillors on the planning committee and wrote a heartfelt appeal in his blog setting out why the elm should be saved, saying:

The councillors, who must consider each application on its merits and do not vote on planning matters on party lines, listened, voting by a majority to reject the school’s application.

There is some debate about what exact sub-species the elm belongs to with the council’s arboriculturist saying it is an English Elm and others suggesting the tree is a Wheatley Elm – both are rare and native to England.