Tomorrow’s bin strike has been called off to allow more time for the council to come up with proposals. 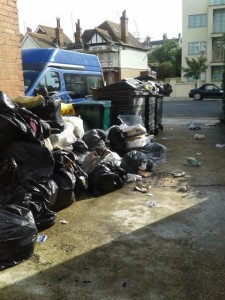 The GMB today agreed to suspend action today and next Tuesday for more talks about the on-going dispute over drivers’ allowances and responsibilities after meeting with the council this morning.

The union says there is now a clear timetable for ongoing discussions and as a result it is suspending the next two days of strike action – but a third day of action on Friday, 3 October remains in place, as does the ongoing work to rule.

Mark Turner, GMB Branch Secretary, said: “Finally the first steps to our hopefully seeking a resolution to this long standing issue has happened, even though it’s only a commitment from council officers to our repeated requests for a clear timetable and scope for discussions it will if adhered to provide the basis for all sides sitting down and meaningfully seeking to resolve the issues once and for all.

“As a result of this step by the council our members have immediately responded by scaling back industrial action as a gesture of good faith, whilst the council go about producing those documents and proposals. So strike action for both the 25 and 30 September is suspended.

“The onus is very much on the council to come back by next week, with clear proposals, focus and commitment to working with unions and staff to resolve the issues, until they do the third day of action on Friday 3 October will and has to remain in place along with the continuation of the drivers working to rule.

“A positive approach by the council to talks will always be met equally with the same response by GMB members going forward and will enable us to lift the continuing threat of industrial action of any form going forward.”

Geoff Raw. the council’s executive director for environment, development and housing said: “I’m pleased that strike action has been suspended. We are continuing discussions with the GMB union and looking at a full service redesign to ensure we meet the needs of the city and to resolve work to rule.

“I’m sorry for the disruption the industrial action has caused, we cannot favour one group of workers over another and increasing allowances for one group of staff would require us to increase it for many others at great cost to the council’s overall pay bill.  The agreement we reached with our trade unions and staff last year was to better ensure we were equal pay compliant.”