The Reverend Martin Poole, 55, the priest at St Luke’s Prestonville, in Brighton, was recognised with a Point of Light award from the Prime Minister.

The awards are given to outstanding individual volunteers, the Cabinet Office said. They go to “people who are making a change in their community and inspiring others”.

Each day, the Cabinet Office added, “someone, somewhere in the country is selected to receive the award to celebrate their remarkable achievements.” 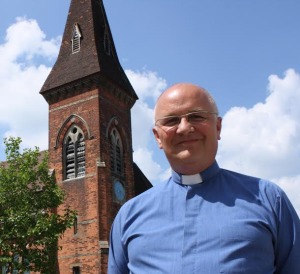 The life-size advent calendar uses the coloured doors of the beach huts lining Hove esplanade, with each hut showcasing an artistic festive surprise.

The final door of this year’s calendar was opened on Christmas Eve by the Mayor of Brighton and Hove Councillor Brian Fitch.

Each hut represents the door of an advent calendar and showcases an artistic festive surprise.

This year’s calendar included a hut filled with work decorated by local schoolchildren from Deepdene School, art exhibitions, Morris dancers and even a mini pub called The Holly and the Ivy.

The project has attracted hundreds of people to the seafront in Hove and has brought the community together to celebrate the festive season.

Mr Poole set up the project to raise awareness of the meaning of advent and to give people an opportunity to celebrate the true meaning of Christmas together.

He spends at least three hours a day every day in December facilitating the event as well as numerous hours in the months beforehand in preparation.

Although the event takes place in December, preparation and organisation must begin as early as August.

Mr Poole’s dedication has paid off every year and the beach hut advent calendar is now an established tradition on Hove seafront.

He has drawn on the support of hundreds of volunteers who have helped prepare each of the beach huts, provided refreshments and attracted local artists and volunteers to provide entertainment every night. 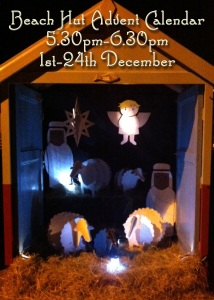 The event also relies on the generosity of 24 beach hut owners, who open up their huts to the community each year.

The Prime Minister said: “Martin has led the organisation of the Beach Hut Advent Calendar which has become the highlight of festive activities in the area.

“He is providing a wonderful opportunity for hundreds of residents to gather and celebrate the festive period together.

“As the final beach hut door is opened this Christmas Eve, I am delighted to recognise Martin’s extraordinary efforts with a Point of Light award.”

Mr Poole was the 183rd winner of the Point of Light award, which has been developed in partnership with the Points of Light programme in America.

Mr Poole said: “I’m delighted that this project is being recognised in this way and I’d like to thank the Beyond team of volunteers who help to make this happen and to the many hut owners, artists and helpers who turn up on the seafront in the middle of winter to make this such a wonderful and spiritual experience.”

Councillor Fitch said: “I’m delighted to have the opportunity to present Martin with a Points of Light award, particularly as the contribution he is being recognised for is the annual Beach Hut Advent Calendar.

“The hut the mayoress and I will be opening presents the nativity which, in the form of the star that guided worshippers, has its own important ‘point of light’.

“Martin’s innovative idea of using a local seaside icon to bring together the community is worth celebrating as are his endeavours in many other fields.

“I’m completely delighted he’s been recognised for all the brilliant work he does. It’s so well deserved.

“Martin dedicates so much of himself to bringing others together. One of the wonderful ways in which he’s done that is through the ingenious Beach Hut Advent Calendar, which so many people, including myself, look forward to every year.”

Anyone wanting to nominate a volunteer for a Point of Light award can write to the Prime Minister.