A protest is planned for tomorrow morning (Saturday 3 January) as campaigners step up their efforts to save an historic building on Hove seafront.

Despite the threat of heavy rain first thing, Brighton and Hove UKIP members hope to galvanise support for Medina House in King’s Esplanade.

They want Brighton and Hove City Council to compulsorily purchase the building to protect it. 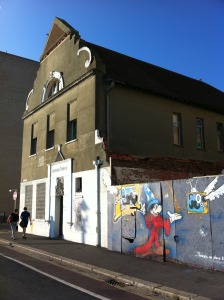 The property was damaged by a fire two weeks ago which appears to have been started deliberately.

It was the second arson to have damaged the Victorian bath house in just over 18 months.

The most recent blaze started shortly after a planning application to demolish the building was made to the council.

One of UKIP’s candidates for Central Hove, Nigel Furness, asked the council to take steps to protect Medina House.

And he praised council planning officer Matthew Gest for responding quickly and positively as enforcement action was started with a letter to the owner setting out what needed to be done.

The building was the subject of a report from Save Hove in the past week which questioned whether the roof had been sabotaged.

The campaign group’s website highlighted a structural report within the planning application which pointed out damage to the roof of Medina House.

Save Hove said: “With wood all over the building to chop out, why climb up to the trusses to take a bite out of Medina there?

“You could be forgiven for wondering if someone actually wanted the roof to fall in.”

The building was bought from the council by Brighton architect and developer Sirus Taghan for £300,000 in the late 1990s.

According to the Brighton and Hove Independent newspaper, quoting official Land Registry records, show it changed hands for £150,000 as recently as 2012.

It was bought by Ardeshir Taghan, 59, and Mohammed Jafari, a 58-year-old Iranian businessman.

But the latest planning application was submitted by Globe Homes, of which Sirus Taghan is chairman.

Mr Furness said that although the council was short of money, this was a matter where it needed to act.

He said that he would hope the recent purchase price would be a useful marker in deciding the compensation to be paid under a compulsory purchase order.

The protest starts at 10am. Mr Furness also said that people could sign an epetition to try to save Medina House. To sign it, click here.