Pope Francis has appointed Bishop Richard Moth, currently Bishop of the Forces, as the fifth Bishop of Arundel and Brighton.

He will be installed as bishop on Thursday 28 May which marks the 50th anniversary of the foundation of the diocese. 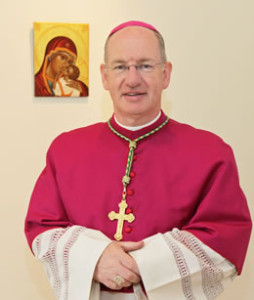 The Bishop of Arundel and Brighton Richard Moth

The bishop replaces Kieran Conry who resigned in September last year as allegations surfaced of an affair with a married woman.

Bishop Moth was ordained a priest in 1982 and served as a priest in parishes in the Archdiocese of Southwark.

His roles included acting as Vicar General and Chancellor of the Archdiocese before being ordained Bishop of the Forces in September 2009.

In addition to his role as Bishop of the Forces, he is chairman of governors at St Mary’s University, Twickenham, liaison bishop for prisons, episcopal adviser to the National Catholic Scout Fellowship and holds a brief on mental health on behalf of the Bishops’ Conference of England and Wales.

The bishop said: “It is a great privilege to have been appointed by Pope Francis as the new Bishop of Arundel and Brighton and I am very conscious of the trust that has been placed in me.

“In these last 50 years since the foundation of the diocese, so much has been done to build up the Church and in the proclamation of the Gospel and, with God’s help, I look to guide and serve the diocese to that same end.”

One of the new bishop’s first public appearances will be at the America Express Community Stadium in Brighton where he will preside at the Jubilee Mass of Thanksgiving on Sunday 5 July.