A band of pirates stormed the Palace Pier in Brighton yesterday on a mission to steal its cannon. 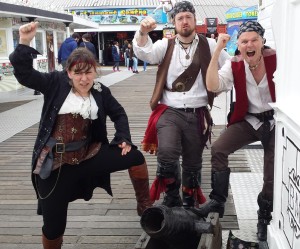 But fortunately, they didn’t get very far – as being actors rather than genuine sea rovers, they didn’t have the necessary strength to shift several tonnes of cast iron.

Pirate captain Lord Bill said: “We did try to lift it up but our backs didn’t make it. We’re a bit pathetic as pirates really.

“The great thing is that even though we were there dressed as pirates, nobody batted an eyelid.

“We had loads of people taking photos of us with these strange devices that hadn’t been invented back in our time.

“But we could have got away with murder – if we weren’t so rubbish.”

The stunt was all part of a day of jigs and japes to promote the Pirate Ceilidh show Dead Man’s Jig, part of this year’s Brighton Fringe.

The pirates also performed sea shanties and dances in New Road from 2-4pm to get people in the mood.

The band is also running a competition to name its ship, with two tickets as the prize – suggestions should be left by midnight tonight on the Facebook event page or tweeted to @PirateCeilidh