Fire breaks out above shops in Western Road

A fire broke out in flats above the Co-Op in Western Road, Brighton this afternoon. 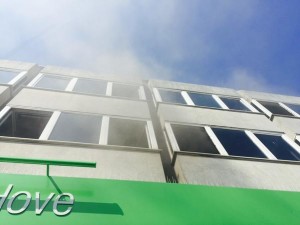 Firefighters were called to the scene after receiving reports people were trapped at 3.40pm.

The fire was soon brought under control with all people accounted for.

Faisal Aris, a barber working at Reds opposite said: “There were three or four fire engines at the flats.

“There’s just one left now, but there was also an ambulance ”

A spokeswoman for East Sussex Fire and Rescue said: “Two fire engines from Hove, one fire engine and an aerial ladder platform from Preston Circus and one officer were mobilised to the address on Western Road at 3.40pm.

“On arrival they found there to be fire in the property above the shop. All persons were accounted for.

“Crews used one hose reel jet to tackle the flames.

“Firefighters administered oxygen therapy to one adult male who was found to be suffering from smoke inhalation before handing him into the care of paramedics.

“Six other people were given precautionary assessments by South East Coast Ambulance.

“Crews used small cutting tools to clear the debris and damped down before leaving the scene at 4.20pm.

“The cause of the fire was found to be accidental.”

A spokesman for South East Coast AMbulance Service said: “We were called to the fire at 3.40pm and stood down at 4.40pm.

“We checked people over at the scene but nobody required hospitalisation.”