Houdini tortoise on the run in Hove

A Hove couple has launched a desperate search to find their “surprisingly speedy” tortoise escaped from two gardens while they were at Glastonbury. 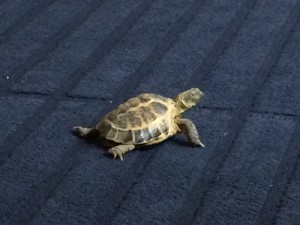 Russian tortoise Reggie was being looked after by friends while Kim Middleton and her boyfriend Chris were at the music festival last month, but he escaped from their garden in Elm Drive, Hove on Saturday, June 27.

He was then spotted by a resident of nearby Wayfield Avenue the following Wednesday, and kept in a garden overnight – but managed to then escape for a second time.

Kim said: “He was spotted by a resident as she was driving to work in the morning because there was a pesky seagull paying him a little too much attention in the street. She put him into the capable custody of a neighbour until she got home from work when she set up a run for him in the garden.

“She was searching for something more secure to keep him in overnight when he escaped, again. Her garden backs on to the houses of Elm Drive and Goldstone Primary School’s field.

“We’ve delivered flyers to all of the houses on Elm Drive which back on to the school field and Wayfield Avenue, as well as the homes on Wayfield Avenue asking people to keep an eye out in their gardens and also check their sheds, garages, greenhouses and outbuildings in case he’s found his way in. We’ve let people at the school and at Weald Allotments know, as well as at Mill View Hospital, in the hope that he turns up.

“We’ve also put up posters on lamp posts and will start to do so a bit wider afield this weekend in case he’s managed to venture further away.

“Reggie is a seven-year-old Russian tortoise. He’s surprising speedy – we describe his fastest gait as marching as he really does stomp around when he’s at his most active. He’s also incredibly good at climbing – hence his talents as an escape artist – and likes to hide in undergrowth.”

If you’ve spotted Reggie, you can email kimberlymiddleton@hotmail.co.uk or tweet Kim at @kimmidds. You can also help in the search by liking and sharing a Facebook page Kim and Chris have set up and using the #findReggie Twitter hashtag.

Kim added: “We really do miss him and would love him to have him home safely. It would be great if people could keep him in mind in the coming days and weeks so when he, hopefully, turns up in someone’s garden or near their home they spot him.”

Young foreign student attacked on her first day out in Brighton