It may just look like a row of boxes filled with wires and flashing lights – but Brighton’s new £740k Digital Exchange is set to help the city build on its reputation as the UK’s Silicon Beach. 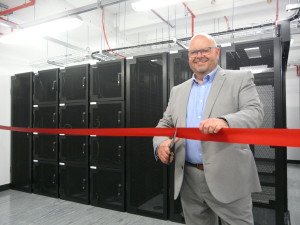 Thought to be the first facility of its kind in the UK, BDX will provide a means of exchanging information among the city’s burgeoning digital sector. It also offers member businesses new ways to provide ultrafast, cost-effective broadband for local companies.

The city council has allocated space for the electronic hardware involved in under-used areas of its New England House complex near Brighton Station.

The authority also allocated £580,000 in government grants to help a number of private firms set up the Exchange, abbreviated to BDX. The authority spent a further £80,000 re-cabling New England House to connect firms within. The total scheme has cost £740,000.

The project was backed with funds from the government’s Super Connected Cities Programme (SCCP).

The exchange represents the second major initiative to improve the city’s broadband capacity. The council still has available government grants up to £3,000 for small companies and voluntary bodies to improve their broadband speeds. Details of how to apply are on the council’s website.

A fire-proof room in New England House hosts racks of servers and switching equipment, connected to a non-interruptable power supply. It will be let at a peppercorn rent until the project is paying its way.

The exchange would also provide a link to the London Internet Exchange (LINX), offering further benefits in connectivity and cost.

Key features of digital exchanges are a means of shifting internet traffic between networks and servers; office space for creative and digital companies that use them and the fact they are run collaboratively by many businesses. They work on the principle of ‘peering’, with participating networks exchanging data to their mutual benefit, rather than buying or selling it.

Wired Sussex is acting as an agent for founding members of the exchange.

The BDX is a key part of the City Deal agreement between the Greater Brighton region and the government. This includes a £4.9m investment to expand and upgrade New England House, creating nearly 900 new jobs.

Digital Economy Minister Ed Vaizey said: “The Brighton Digital Exchange is one of the flagship projects of the Super Connected Cities Programme, which saw government invest more than £1.2m into Brighton and Hove.

The exchange will make a huge impact on the creative, design and IT sectors in one of Britain’s most creative cities, allowing companies to gain access to new products and services.”

Council leader Warren Morgan said: “The digital and creative sector is big and getting bigger as a provider of jobs in this city. It is the new wave for our economy as significant as previous waves from history like the railways, tourism and conferences. This project sees the council working with government and companies to make sure we’re equipped for the future and I am keen to see the benefits of this new economy spread throughout the city.”

BDX chair and Fastnet CEO Joe Kerr said: “The exchange provides the technology and infrastructure to enable internet service providers like mine to work together to offer better and more tailored internet services to local businesses, especially those with specific digital needs. Through this venture Brighton is leading the way with an innovative approach to connectivity, further to support growth of this city’s digital economy.”