A mother of two from Brighton has restarted an appeal for winter clothes for the Middle East.

Samara Levy was moved by the plight of people freezing in refugee camps in the summer clothes in which they had fled.

She emailed fellow school mums and was overwhelmed with the response as word spread and donations poured in.

She had already set in place plans for the coming winter but said: “The size and scale of the ‘migrant crisis’ in Europe has reached enormous proportions.

“As compassionate human beings, we cannot ignore the tragic reports of lorries filled with decomposing bodies and heartbreaking scenes of drowned children washed up on European shores. 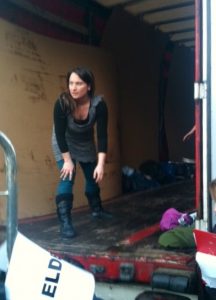 “Yet the desperation which drives these families to embark on these perilous journeys still seems to be disregarded by many in the UK.

“The crisis in the Middle East is unimaginable. These people have fled in search of safety for their families and many of them meet a tragic end in doing so.”

Since starting the original appeal for winter clothes last autumn – almost a year after first seeing pictures of freezing refugees – she has sent 14 lorries and a container.

The clothes and other items of humanitarian aid were collected and sent to Iraq and Jordan in less than a year.

For details of the most urgently needed items, click here.

She said that there were now more than 3.1 million internally displaced people plus a quarter of a million Syrian refugees in Iraq.

Lebanon has the highest number of refugees per capita in the world with one in three of their population being a refugee.

It was followed closely by Jordan, she said, which has the second highest number of refugees per capita in the world.

She added: “As a mother who sees a huge surplus of clothing and shoes in the UK, I have to do something when I know that babies, children and vulnerable adults will die of hypothermia in the Middle East this winter.

“I have trusted partners on the ground that distribute the aid I send to the people who need it.” 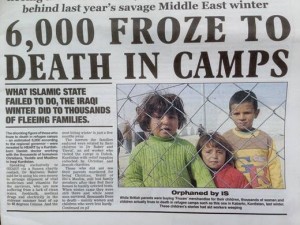 The aid agencies are unable to meet all the needs of the millions of people who have been displaced across the Middle East, she said: adding: “Food rations have been cut back or stopped by some of the major aid organisations because they don’t have enough funding.

“The people still need this food, but there isn’t enough money to give them this aid.

“It is simply a matter of sharing. We try to teach our children to share but while aid agencies and governments are unable to deal with these crises, we need to practise what we preach and share some of what we have with those that have nothing. We all have something to give.”

In addition to winter clothes and shoes, she is also sending “care packs” filled with essentials for the estimated 116,000 displaced pregnant women who are in desperate need.

And she added: “Having a new baby comes with many challenges at the best of times but to do it with nothing, not even a home, is something I can’t begin to imagine.”

Samara Levy, a member of the congregation at St Peter’s Church, Brighton, is asking people to organise collections in their communities, churches and schools.

She wants help not only to collect winter clothes and shoes but also to raise the £6,500 needed to send each lorry to the Middle East.

She would also love to hear from anyone who can donate warehouse space for part of the appeal or who has links with distribution companies to help with transport in the UK.

• On Tuesday (8 September) Baroness Cox is due to visit St Peter’s to speak about her humanitarian work and the persecuted church. The event starts at 7pm.

Can you house a Syrian refugee in Brighton and Hove?

Future of Brighton debated at festival