UPDATE: A catalogue of faults on the Brighton mainline this morning has all but shut down the line, with some commuters still stuck on trains at 9.20 which they boarded almost three hours ago.

The first fault at the Clayton tunnel, a broken cable, saw trains sent back to Brighton and re-routed through Lewes.

But subsequent signal failures between Preston Park and Hassocks then another at Balcombe have plunged the route into chaos, with six trains stuck at Balcombe Tunnel shortly after 9am. 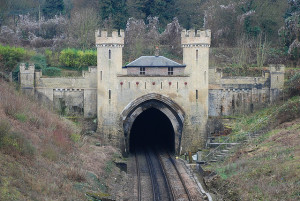 The problems started at about 6.45am this morning, with the 6.37 from Brighton to London Victoria sent back to the station as it reached the Clayton Tunnel and re-routed via Lewes.

As of 9.15am, that train had made it no further than Three Bridges, and another, the 6.46am Brighton to London Victoria, still in south London.

A passenger on the 6.46am train, David Davis, said: “There was a very distressed lady in a wheelchair trapped on our delayed train, and no staff to assist.

“Even the toilet on our train has broken down now. Slow motion disintegration!”

“Everyone in the carriage looks like they’ve resigned themselves to it – it’s a joke, but that’s what you expect with the trains these days.”

The Southern website says: “A signalling problem between Hassocks and Preston Park and also at Balcombe is causing delays of up to 45 minutes to trains between Three Bridges and Brighton/Hove/Lewes. There is no firm estimate yet of how long disruption will last but it is likely to continue until at least 10am.”