A huge advertising hoarding erected without permission which blocked two elm trees planted by the community has been taken down after a storm of protests. 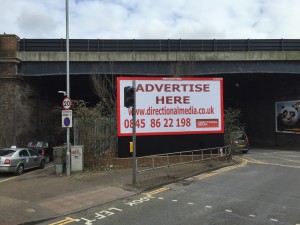 The structure was put up in March on a patch of council-owned land next to the rail bridge at the junction of the Old Shoreham Road and New England Road.

It completely screened two golden elm trees planted in 2011 as part of a community trees project. The hoarding invited passers-by to “advertise here”, giving the contact details of a company called Directional Media.

The hoarding was reported to the council’s planning investigations team by Cllr Julie Cattell, chair of the planning committee. She had been contacted by Marek Kohn, chair of the Prestonville Community Association.

Mr Kohn, who was instrumental in getting the trees planted, feared the hoarding would damage them and prohibit their growth.

Council officers found no consent for the hoarding had been granted by either the planning or estates teams.

In such cases, councils can take enforcement action under planning legislation, but this process is often takes a long time. However, in this instance the council was able to act more swiftly as landowner and simply removed the structure from its land.

The council decided against proceeding with a prosecution because the costs involved were too high, but will be keeping an eye out for any more unauthorised boards.

Cllr Cattell said: “Directional Media took a gamble by putting the hoarding in such a prominent location, on land they knew wasn’t in their ownership.

“They just hoped that nobody would bother to report it. This practice is not uncommon unfortunately and some unscrupulous billboard companies make a lot of money without obtaining the necessary consents, blighting neighbourhoods at the same time.

“Thanks to the swift action of the local community, we were able to get this one removed within a matter of weeks. I’m very proud of the collaborative working between the community and council officers. We’ve made it clear we won’t tolerate such practices in our city.”

Mr Kohn said: “We’re delighted to see that the council has taken down the rogue billboard that was blocking the light from the Golden Elms.

“These were chosen specially to brighten an otherwise unattractive location, as part of a project in which the Prestonville Community Association and the council worked together to get trees planted around our neighbourhood. We’re very proud of the results.

“We were dismayed to see the billboard go up, as it was not only unsightly in itself but posed a real threat to the trees. We had difficulties communicating with Directional Media.

“We were surprised to learn that the billboard had been put up without permission on council land. It was free-riding on a public resource as well as harming a community amenity.

“We are very grateful to Cllr Cattell and council officers for the decisive action they have taken.”

.@BrightonHoveCC did you approve this huge advertising board that blocks light to our community elms? pic.twitter.com/ywoXYInDje