The Greens could turn back to Brighton Pavilion MP Caroline Lucas as their national party leader although this time as one half of a job share.

The party’s only MP is putting herself forward for the post with the national work and pensions spokesman Jonathan Bartley, 44, from London.

They have described their tilt at the leadership as “beyond politics as usual” as they aim to become “the first job-shared leadership in modern British politics”. They hope to highlight “the power of working together”.

They said that they began discussing their joint vision when they met at a protest against government disability cuts and that they were pledging to “do politics differently”.

Mr Bartley rose to prominence in the Green Party after confronting Prime Minister David Cameron over his struggles to get his wheelchair using son into a local school.

Dr Lucas, 55, served as an MEP for the South East England constituency in the European Parliament before becoming the Greens’ first MP in the House of Commons. She was party leader from 2008 to 2012.

They said that “their leadership campaign will focus on ensuring there is a Green voice in every community”.

And they hope to “build a party that reflects modern Britain and plan to break open our current closed political system, including by starting a debate about a one-off progressive pact at the next general election”.

They said that they were also “committed to every voter hearing a dynamic and eloquent Green message about a future built on environmental sustainability, shared responsibility and collective ownership”.

Bartley and Lucas started their campaign in the West Midlands today (Wednesday 1 June).

Mr Bartley said: “Caroline and I share a burning ambition for our party to have more of an impact than ever before but neither of us felt we could do the job alone.

“Like any parent I struggle to balance work and family life and, with the barriers that a disabled child like my son Samuel faces, I just couldn’t dedicate the time needed to be the sole leader of the Green Party.

“If we do become co-leaders we’ll both be able to travel up and down the country setting out the party’s distinctive message and helping win more elections than ever before. 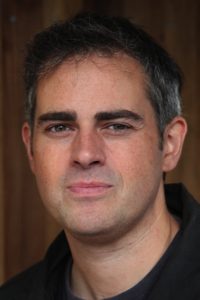 “Ultimately we both believe that by working together in this role we’ll have a greater impact than either of us would alone.

“The one-off 2020 progressive pacts we’re talking about must be done on a case by case basis, as agreed by local parties, and will have at its core a commitment to a fair voting system.

“If it happened it would only be in a handful of seats but it could make all the difference. Time is up for the two-party system. We want to seize this moment to create a new kind of politics.”

Dr Lucas said: “Jonathan and I are seeking nominations as co-leaders because we believe that by sharing power and working together we’ll be more effective than either of us would alone.

“We both recognise the urgent need for distinctive green voices in British politics and have a vision for a better way of doing things that will tackle not just the cost of living crisis but the quality of living crisis too.

“We will be honest about the need to redistribute power as well as wealth and about the need for everything we do to be climate-proofed rather than adding on environmental protection as an optional extra.

“We’ll both be dedicating our time to building up the Green Party but the job-share means that I can also keep focusing on my constituents in Brighton and my parliamentary work.

“Over the past four years I’ve become ever more aware that the challenges facing my constituents in Brighton can only be fully addressed by completely changing not just the damaging policies of this government but the way we do politics itself.

“That’s why our bid for leadership is centred on going beyond politics as usual.” 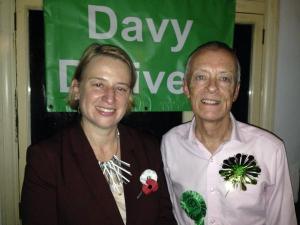 Natalie Bennett with Davy Jones, who stood for the Greens in Brighton Kemptown at the last general election

The current leader Natalie Bennett said last month that she would step down when her four-year term ends in September.

The party said: “Every Green Party member can vote to choose our new leaders.

“Green Party members who have joined before or have a current membership by midnight on (Sunday) 24 July will be entitled to vote.

“Voting will be carried out online from Monday 25 July to Friday 26 August, with the results announced on Friday 2 September.”