A Brighton parent has challenged education chiefs to think about the geography around schools as they look at catchment areas.

Ben Varey, of Friar Road, pleaded with them not to split his local community – as would happen if the council adopted any of the three options currently under consideration.

Mr Varey also made a point of doing his sums out loud as he highlighted the distances pupils would have travel unless different catchments are drawn up.

He lives 500 metres from Dorothy Stringer School but his street is not in any of the three current proposed catchments.

It prompted him to present a petition to Brighton and Hove City Council’s Children, Young People and Skills Committee this afternoon (Monday 6 June).

He said that it had been signed by 137 people, “representing about 95 per cent of the houses in and around Friar Road”. 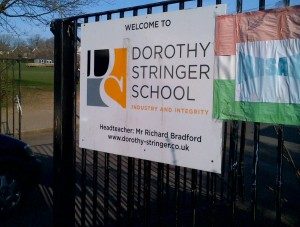 Mr Varey said: “Friar Road is less than half a mile from Dorothy Stringer – or 500 metres across the field – yet none of the options give our children access to Dorothy Stringer.”

Yet one option would give access to Dorothy Stringer to families in Ashdown Avenue, Saltdean, which is 11,500 metres or 23 times further away, he said.

Another option, he added, “would not give us access to either of our local schools. With two secondary schools right on our doorstep, this defies logic.

“In all the current options the catchment boundaries around Dorothy Stringer are severe and would split our children from their peer group.”

Mr Varey pointed out that the council had previously said that it aimed for all catchment areas “to accommodate children living in the area”.

And that Brighton University had reported that “the most significant priority for students was to attend the same school as their close friends”.

Mr Varey said: “The proposals as they currently stand do not meet these aspirations.

“Please let our children walk to their local secondary schools and continue to feel part of our community.”

Councillor Tom Bewick, who chairs the Children, Young People and Skills Committee, said that the current consultation was a “pre-statutory consultation”.

Already there had been several public meetings and more than 1,600 responses. Councillor Bewick said: “There is obviously a huge amount of interest out there in the community.”

With a new secondary school being planned, he said, this and the responses received so far would be evaluated before proposals were drawn up for the statutory consultation to come.