Brighton Station protest kicks off late because of delayed trains 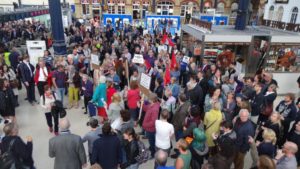 Scores of people protested tonight, demanding that Govia be stripped of its franchise – but many were late because of delayed and cancelled trains.

Angry commuters waved placards and chanted “Southern out!” on the concourse, as security guards and British Transport Police officers looked on.

At one point, the crowd was interrupted by an announcement that a train had been cancelled, prompting them to boo, as this video by Snowy Brighton shows:

Just a couple of hours before, the RMT had announced it was holding another 24 hour strike on Tuesday – although many commented that given weeks of cancellations because of staff shortages, they wouldn’t see much difference. 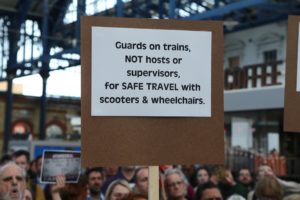 The rail shambles has blown up over a row between the union and Govia over changes to the guard role and driver-only trains. 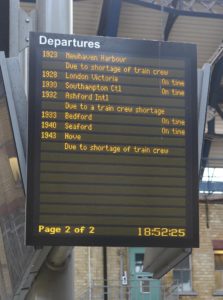