More than three decades after the IRA bombed Brighton’s Grand Hotel, survivors of the blast and those who helped rescue them are being warned they may face a new threat – from asbestos in its debris. 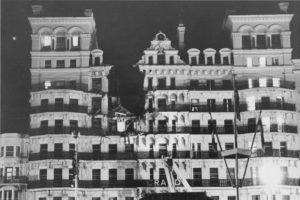 Sussex Police today issued an appeal to trace those who worked at the scene of the Brighton bombing in 1984, following the death of a Met officer from an asbestos-related disease last year.

It is possible that they may have been potentially exposed to asbestos within debris of The Grand Hotel.

Assistant Chief Constable Steve Barry, who is leading an emergency services group co-ordinating the effort, said: “We are trying to identify and inform emergency service colleagues and others who may have been exposed to asbestos fibres to offer medical advice and support.

“I understand that on hearing this news people may be anxious as to whether they have been exposed to asbestos and concerned about the possible effects on their health.

“I would like to emphasise that the possibility that they have been affected is very small but I feel it is the right thing to pass this information on.

“People could have potentially been exposed to asbestos fibres within the hotel debris and while we know that police officers working at the scene were issued with personal protective equipment, this was some days after the explosion.

“I feel I have an ethical duty to identify and inform people now as we have become aware that a Metropolitan police officer, who had worked at the scene, sadly died from an asbestos-related disease in December last year. While the chances are small that people were exposed at any length to asbestos, we want to offer reassurance and health advice.

“We are sending letters to a number of partner agencies including the city council, Brighton and Sussex University Hospital NHS Trust and Conservative Party members as well as local hotels and businesses.

“This will let them know that their staff may have been affected at that time and tell what we are doing to support our own officers who may be concerned about the possible effects on their health.”

Sussex Police is offering its officers health information and support, providing them with a letter to be given to their GP as well as answers to some questions they might have.

ACC Steve Barry said: “By publicising this issue, I don’t wish to cause distress but inform people so they can seek health advice from their GP and to reassure them that the possibility that they have been affected is very small.”