A road where more than half the houses are shared by students is set to be the first to be cleared up by a team of university volunteers. 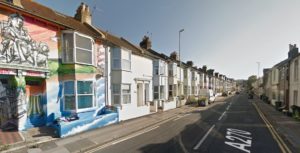 The University of Sussex has put together a team of staff and students for clear up Viaduct Road tomorrow, blitzing rubbish and graffiti alongside council workers and local residents.

The team has pledged to visit four city streets a year, with Beaconsfield Road, Hollingbury Road and Washington Street earmarked as the next to be visited.

Viaduct Road, where 36 of the 71 houses are registered houses of multiple occupation (HMO), commonly shared by students, has been the subject of concerted efforts by residents, led by the London Road Local Action Team, to improve what they describe as the gateway to the city.

Dean Spears, Head of Housing at the University, said: “When we heard from the London Road Local Action Team that residents wanted to clean-up Viaduct Road, we took the opportunity to bring them and our staff and students together to help.

“Although there are only a few Sussex student households here, we feel very much part of the local community and care very much about the areas around our campus, and the people who live there.”

Other measures taken by Brighton and Hove City Council following requests from the LAT include putting old flower planters as chicanes to slow speeds, and writing to landlords asking them to give the houses a lick of paint.

It was one of these letters which prompted one student landlord to commission graffiti artist Aroe MSK to paint a mural across two house fronts – which was later matched by another on the two faces opposite.

The university says it has considerably increased its engagement with local residents over the last few years and, in November 2015, the University established a permanent presence in the city centre by opening an information centre on Lewes Road.

The mayor, Councillor Pete West, and John Duffy, Registrar and Secretary at the University of Sussex, will welcome the band of volunteers at midday.

Following a short briefing, the volunteers will head in pairs to Viaduct Road, where they will collect rubbish, pick up litter and clear front gardens. Meanwhile, the council’s city clean team will blitz graffiti on the street.