With everything that’s been going on in the last few weeks, it would be understandable if Jeremy Corbyn was feeling a bit distracted when he arrived in Brighton to speak at the Unite conference yesterday. 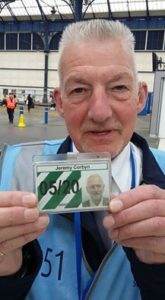 So it came as no surprise when a security guard found an ID card apparently belonging to the beleaguered Labour leader at Brighton Station.

The card, featuring a picture of Mr Corbyn, his name, and the number 05/20 on a green and white striped background, was handed into police as per the instructions on the back by station security.

Mr Corbyn, who is known for travelling on public transport, was in Brighton to speak at the Unite conference yesterday afternoon: