Residents are urging roads bosses to tackle one of Brighton’s most polluted streets after 1,300 people signed a petition.

Their concerns were underlined by a recent report indicating that Rottingdean High Street has the most “intense” pollution levels in the whole of Brighton.

And air pollution is a “silent killer” that can rob nine years from people’s lives, with children and the elderly most at risk, according to the report.

Alison Wright, 50, of Knole Road, Rottingdean, lived on the high street for three years, while her current house was being built and suffered various health problems, as did her family.

She said: “During the time I lived there, my health deteriorated significantly.

“Due to an accident I had, I was in the house all the time and experienced difficulty breathing, wheezing and coughing and had to start using inhalers. My daughter also started getting a persistent cough and my son had to start using an inhaler.” 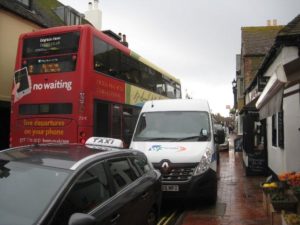 Mrs Wright became involved with the St Aubyn’s Field Evergreen (SAFE) campaign group. SAFE was set up to object to plans for a nearby site in part because of the traffic and pollution levels which, Mrs Wright said, were “out of control”.

SAFE will be presenting its petition to Brighton and Hove City Council today (Thursday 21 July). It wants councillors to tackle the traffic levels in Rottingdean High Street and take immediate action to improve the “unlawful” air quality.

Nigel Smith, who chairs SAFE, was born and brought up in Rottingdean. He said: “The levels of traffic, especially heavy goods vehicles, is way in excess of the capacity that Rottingdean High Street is capable of handling.

“As the high street is a canyon, the pollution is unable to escape and therefore the children who attend the local schools which are only 100 metres away are subjected to very poor air quality.

“This can be extremely dangerous and lead to serious illness,” he said, as well as holding back a child’s development.

“Clearly we have a reached a point where the council must act without any further delay.” 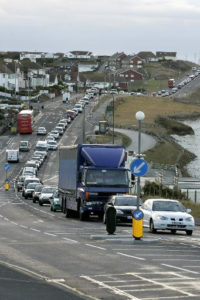 Traffic queuing on the A259 back through Saltdean

At the same meeting, at Brighton Town Hall, Rottingdean Coastal Ward councillor Lynda Hyde will be putting forward a notice of motion aimed at finding a solution the problem.

Councillor Hyde, who lives in Rottingdean, said that she uses the high street regularly and fully supports SAFE’s work.

She added: “I will be asking for their (councillors’) support in requesting that a traffic modelling study is carried out.

“The biggest problem is lorries who use the high street as a short cut.”

Their ward colleague Councillor Mary Mears has previously said that there was nowhere for the fumes to go in the confined high street.

She said that she had come across problems such as children in buggies with asthma and chest complaints.

Many residents have photographed the traffic to provide evidence of the problems to the council, including Neil Austin, 49, a former police officer, of Rottingdean High Street. He said that he had “never seen it so bad”.

Public Health England estimated that the whole population’s exposure to fine particulate matter across Brighton and Hove contributed 5 per cent to 6 per cent to all causes of annual mortality.

At a recent conference meeting, the council’s senior technical adviser for air quality, Samuel Rouse, said up to 11 per cent of deaths in Brighton were due to pollution.

Air pollution levels in Rottingdean were higher than at Heathrow last year.

Air pollution is second only to smoking as a cause of death in Britain.

It costs the lives of an estimated 29,000 people a year – twice as many as road accidents, obesity and alcohol combined.

It contributes to heart attacks, lung disease, cancers and damage to the brain, nerves, liver and kidneys.

Financially it costs the NHS £19 billion a year or 17 per cent of the NHS budget.