Celebrity chef Jamie Oliver is inviting people in Brighton and Hove to take part in a challenge to cut their sugar intake.

The Sugar Smart campaign aims to raise awareness of the harm that excessive sugar consumption can do in a bid to help reduce obesity and improve dental health.

Brighton and Hove Food Partnership launched the year-long campaign alongside Brighton and Hove City Council and Jamie Oliver’s Food Foundation. They are running four easy challenges during the next few months for residents to try.

The first challenge started yesterday and involves making breakfast with low sugar. People can take photographs of their low sugar breakfasts and add them to the Sugar Smart Facebook page to get a chance to win a £30 voucher for the Love Fit Café in Queen’s Park.

The Food Partnership said on their site that they “recommend families and individuals pledge to follow the challenge for a week to see if they can discover healthier options and kickstart healthier morning habits”.

The other three challenges involve removing sugary drinks from your diet, swapping sugary snacks for savoury ones and cooking meals from scratch to avoid processed foods.

There will also be events, competitions, school activities, recipe ideas and a social media campaign to raise awareness. 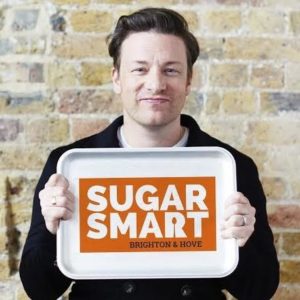 The Food Partnership will also be offering free workshops for individuals and organisations to share ideas about ways we can reduce our sugar consumption and it has produced a booklet with extra information that can be downloaded from its website.

Celebrity chef Jamie Oliver has campaigned about healthier food for some time, beginning with his school dinners campaign which changed menus for many schools across the country. He has now turned his attention to processed and hidden sugars.

He said: “It’s time for families and communities across Brighton and Hove to get involved and support the Sugar Smart City campaign. We want everyone to get behind these challenges and give them a go whether it’s for a day, a week, or forever.

“It’s always good to mix things up, and this is about making simple swaps or choices that together can have a really positive impact on your overall health.

“I know Brighton and Hove is a forward-thinking exciting city. This is your chance to lead the way and together, show the world you can be the first Sugar Smart City.”

Brighton and Hove Food Partnership said on its website that Brighton and Hove is the first UK city to tackle sugar addiction on a city-wide scale. They said the city’s progress “is being closely watched around the world as an inspirational and influential model”.

There was a Sugar Smart City consultation at the end of last year which involved residents, schools, food outlets and other groups in the city taking part. Results from the 1,136 responses found that 81 per cent of respondents were concerned about sugar in food and drink and 71 per cent said that they wanted to reduce their own sugar intake.

Some local businesses across the city are also taking part in the campaign by promoting free drinking water, creating offers to influence healthier choices and displaying posters to raise awareness of sugar content in drinks.