Gala show tonight to celebrate 25 years of the Sussex Beacon

A gala show will celebrate 25 years of the Sussex Beacon at a new venue in New Steine Gardens, Brighton, tonight (Friday 3 February).

The show – Celebration! – opens a 17-day festival, the B Right On LGBT festival, as part of LGBT History Month.

It is being held as NHS funding cuts threaten the closure of services at the Sussex Beacon, the local HIV charity.

The venue – the Phil Starr Pavilion – has been named after the legendary drag queen who died in 2005.

More than 50 events have been lined up under the banner of the B.RIGHT.ON LGBT Festival to highlight the work of the city’s many LGBT groups and organisations.

Lesbian, Gay, Bisexual and Transgender (LGBT) History Month takes place every February as an international observance of the collective history of the community.

It gives LGBT people all over the world the opportunity to commemorate and remember the bravery of those who campaigned and spoke out to help achieve the freedoms and equality enjoyed today.

Tonight’s show is the first at the new venue – the Phil Starr Pavilion, in New Steine Gardens. It is billed as a multi-purpose heated community theatre and performance space with hi-tech stage, lights and sound system – and a licensed bar. 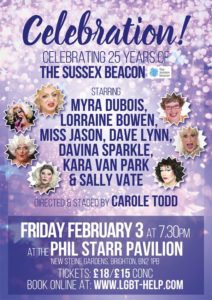 The festival and venue have been described as a “groundbreaking initiative”, grant funded by Sussex Police and the Brighton Pride Social Economic Fund and Rainbow Fund, with officer support from Brighton and Hove City Council.

The aim is to engage the city in the wide range of issues highlighted through the work of the Brighton and Hove LGBT Community Safety Forum.

It also features the legendary drag queen Maisie Trollette – described as “now in the 83rd year of her reign” – and still performing regularly at venues in London and Brighton.

Dancers from the Brighton Academy choreographed by Emma Green will open the show which is directed and staged by West End director and choreographer Carole Todd.

Tickets at VIP tables cost £18 (£15 for concessions) and a limited number of £10 tickets available in the stalls behind the VIP tables have now been released for sale.

Free community events during the festival include
• A Mental Health Day hosted by the LGBT+ mental health project MindOut on Thursday 9 February
• HIV History Day on Friday 10 February, hosted by Lunch Positive who will run a community café on site during the course of the festival
• A Yoga Day on Saturday 11 February
• A Valentines Tea Dance hosted by Maisie Trollette on Tuesday 14 February 14
• A Disability Awareness Day Wednesday 15 February
• A Family Fun Day on Saturday 18 February, with entertainers, side shows, kids disco, first aid workshops and a community café
• Each Sunday the Village Metropolitan Community Church (MCC) will be holding a weekly Soul Safari for those of faith to explore their spirituality
• The Brighton Gay Men’s Chorus will be singing at the first Soul Safari on Sunday (5 February) at 3pm in memory of chorus member Pablo Fernández-Arias

Tickets for all events are available from www.lgbt-help.com.