A bus user group has withdrawn its support for the controversial Valley Gardens road scheme, saying it now believes it will increase congestion and journey times. 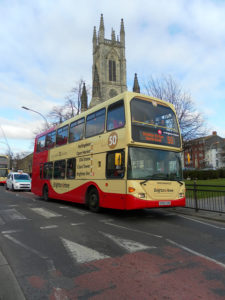 Brighton Area Buswatch believes the junction of St Peter’s Place and London Road will get significantly worse as the scheme routes buses along the same lane rather than splitting south of the church.

And it believes that the reduction in general traffic lanes from two to one will result in tailbacks which prevent buses reaching dedicated bus lanes, also slowing journeys.

Buswatch chair Andrew Boag said: “There are good points about the Valley Gardens scheme. It will create some more attractive spaces in gardens currently surrounded by traffic on both sides, producing a linear park effect. It will also improve the environment for pedestrians and there will be better facilities for cyclists.

“But we doubt whether it can achieve its aim to improve air quality if the roads become more congested. With little likelihood of a decent Park & Ride scheme in the foreseeable future the scope for reducing car journeys originating outside our area is very limited.

“There are 45 million bus journeys a year in Brighton and Hove – almost one million a week. This is the highest bus use per head anywhere in the country outside London, three times more than in Portsmouth and many other similar size cities.

“That is a fantastic achievement, made possible through a successful twenty-year partnership between Brighton and Hove City Council, Brighton and Hove Buses and other bus companies. With the right facilities there is plenty of scope to grow bus use further.

“Bus companies are trying to speed up buses with smartcards, mobile phone tickets and are investing in new two door vehicles on the busiest routes. The council must not put these achievements at risk by implementing a scheme which is harmful to buses and bus users.

“What we need is a comprehensive strategy for improving bus services. We also need new suburban bus links, so passengers don’t have to travel through the city centre to cross the city.”

Mr Boag has written to Cllr Gill Mitchell, chair of the city council’s environment and transport committee, to outline his concerns.

She replied: “Brighton & Hove City Council are fully aware of the importance of our award winning Bus Services and the need to ensure the service can run effectively and efficiently to support the overall transport network.

“Valley Gardens is one of many schemes across the city which provides priority or dedicated city centre road space to enable valuable bus services to run effectively.

“The key principles of the proposals are to simplify the existing highway network making the journey through Valley Gardens less complicated and more legible for all users, improving cycle and pedestrian networks and improving safety and air quality within the project area while simultaneously improving access and enjoyment of the greenspace.

“The specific concerns you have raised with the Valley Gardens scheme have been taken into consideration during the development of the design and potential solutions have been discussed through regular meetings with Brighton and Hove Bus and Coach Company held between November 2016 and January 2017.”

And she said there were discussions to create a southbound bus lane in the southern part of the scheme, which will be explored further if phase three of the scheme, from the Pavilion to the Aquarium roundabout, goes ahead.

The Valley Gardens scheme was started under the Green administration, and originally envisaged as a way of creating a new city park in the centre of Brighton.

It became a political hot potato in the run up to the 2015 city council elections, during which Labour pledged to suspend and review the scheme if elected.

One of their first actions after taking control of the council was to commission new traffic modelling reports, which predicted that during rush hour, journeys on half the routes through the area would slightly increase and half reduce.

Taking this and the fact that scrapping the scheme would leave the council seriously out of pocket with the loss of £8million funding from the Local Transport Board, a revised scheme was unanimously approved last November.