Six men jailed for drug dealing in Brighton and Hove

Six drug dealers are behind bars having been jailed for selling heroin in Brighton and Hove.

All six pleaded guilty at Hove Crown Court, having been arrested after a six-month investigation by officers from Sussex Police.

They are among more than 70 people arrested during the investigation by Brighton and Hove police’s Community Investigation Team into the supply of drugs to the area. 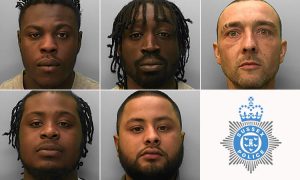 Joshua Otaru, 20, formerly of Atlingworth Street, Kemp Town, was jailed for three years and four months. Otaru, who turns 21 on Friday (28 July) also previously lived in Merton. As well as conspiring to supply drugs, he admitted having a knife.

Chazen Stumke, 20 , of no fixed address, was jailed for two years after being caught supplying drugs on seven occasions.

Carl Gillespie, 44, also of no fixed address, was jailed for a year, having been caught supplying drugs on one occasion in October last year.

Jordan Salmon, 21, of Midship Point, The Quarterdeck, Isle of Dogs, London, and Ruhalur Rahman, 24, of Larson Walk, Tower Hamlets, London, were both jailed for three years and four months each.

A seventh man, Emad Uddin, 22, of Queen’s Road, Northamptonshire, is awaiting sentence after being convicted of supplying drugs between dates in December last year and March.

Judge Anthony Niblett praised the work of officers from the Brighton and Hove Community Investigation Team.

Detective Inspector Julie Wakeford said: “These sentences are the latest for those arrested as a result of a drugs operation targeting the supply of heroin into the city.

“Our work, which is supported by the Community Safety Partnership, is an example of the excellent joint working that continues in the city targeting those who supply heroin while at the same time encouraging those who need support with addiction into treatment.”