Their drive to improve the station has won the backing of the Labour MP for Hove, Peter Kyle, and Westbourne Ward councillor Tom Bewick.

Commuters and residents have come together to set up the Aldrington Passenger Action Group (APAG) to take their campaign forward.

They said that they aim to “put pressure on the parent owner of franchise operator Southern, Govia Thameslink Railway (GTR), to act on commuter demands for better facilities”.

The group said that it had asked GTR for a station upgrade, including better platform safety, improved signage and modern ticket machines that work.

The group said: “Despite passenger numbers doubling at Aldrington in the last decade, GTR told passengers on (Monday) 14 August that improvements were not justified because of what they termed was only a ‘third station’.

“Yet, third class passengers are exactly how residents of Aldrington and Poets’ Corner feel the rail company is treating them.”

Mr Kyle, said: “I fully support local residents in what they are trying to achieve with this campaign.

“After all, Southern is receiving increased revenue from these commuters as usage at the station has doubled in the last decade.

“I don’t think it is too much to ask of rail bosses that they properly invest in small station facilities along the lines that APAG is proposing. 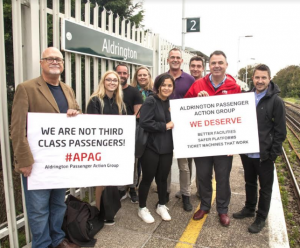 “I will be contacting the Southern boss asking him to meet with me and passenger representatives in the near future to discuss in more detail how we can improve Aldrington Station.”

Councillor Bewick said: “I’m delighted that our Member of Parliament supports this campaign.

“He has already been working tirelessly in supporting constituents on the broader issues affecting the punctuality and performance of Southern.

“But this campaign is about ensuring smaller stations are not forgotten by profit-making companies like GTR, too often eager to fill up the pockets of shareholders instead of investing properly in the kind of service improvements APAG is now demanding.”

APAG chair Edward Crask said: “On behalf of local commuters, I welcome the support of our MP and local councillor.

“It shows that far from us being fobbed off, or going away, we are prepared to step up our campaign to secure better facilities at Aldrington Station.

“We’re not asking for the earth. We just want to see some investment from the Small Stations Scheme Fund which Southern already has at its disposal to undertake modest upgrades.

“Instead of dismissing our calls, GTR should be sitting round the table and asking for our input.”