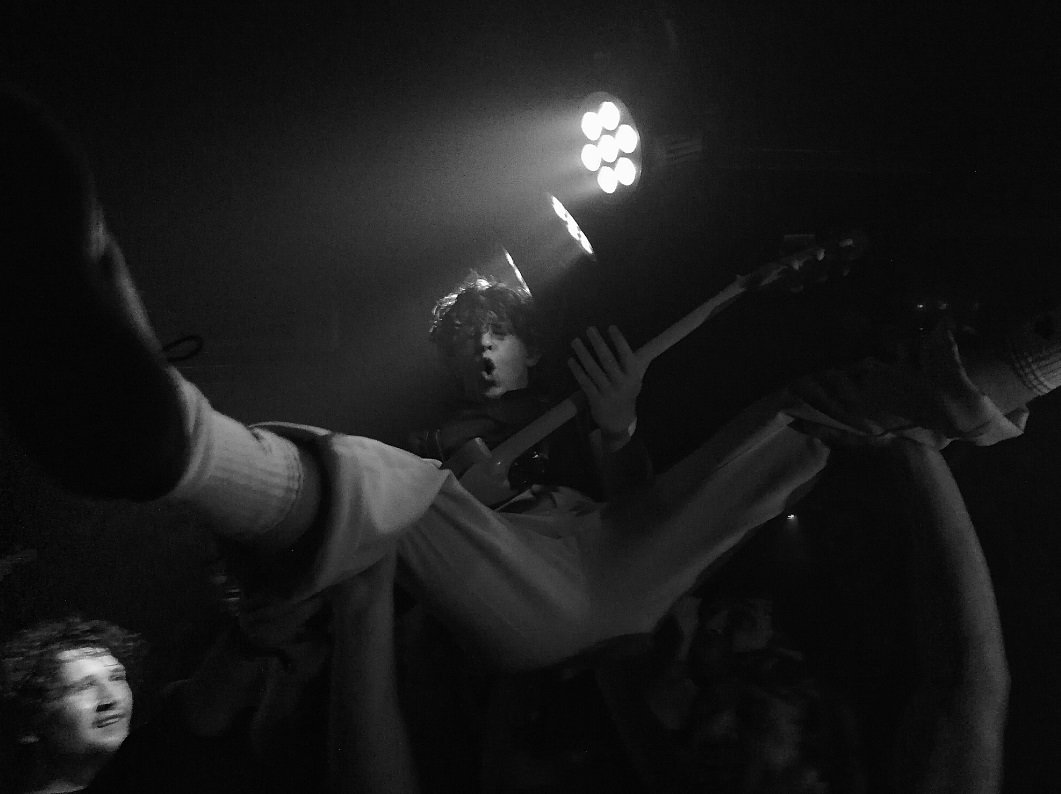 As part of ‘This Feelings – Alive’ tour, four of the most exciting new prospects in the world of indie rock gathered together for the very first time at Patterns in Brighton tonight (15th October). They were here in town flying the flag as the very best of the new classic British guitar bands. 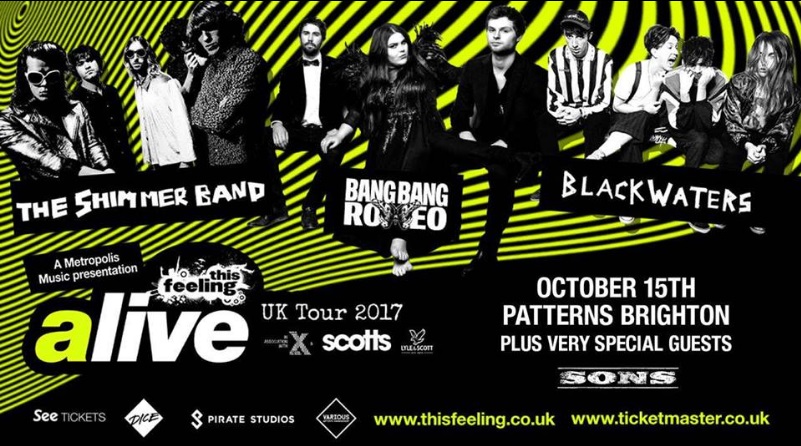 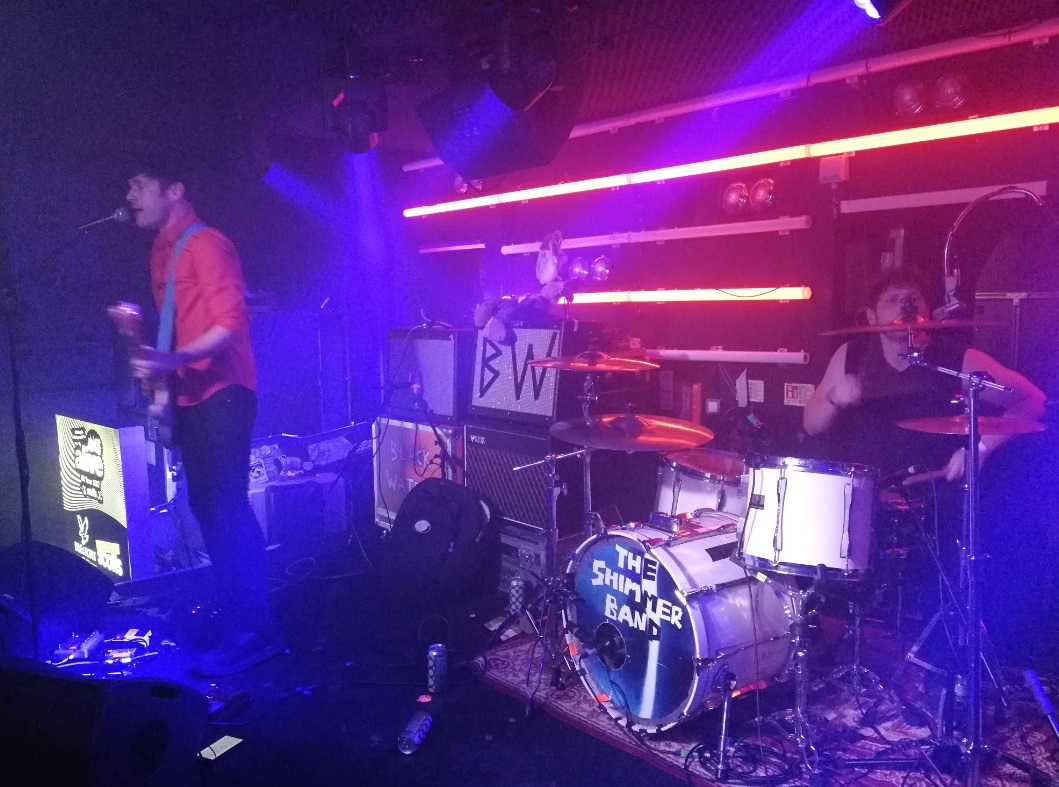 First up, were two brothers, Lee and Nick Meldrum, who last year formed the incendiary buzzsaw act known as SONS. The guys are based in Brighton and Seaford (the adopted home of punk legends Charlie Harper of The UK Subs and the Sex Pistols associate Jordan) so they can easily get together to trash out their Nirvana-esque sound.

Tonight they had brought their whole fan club possee with them and they sure did live up to their billing. The three of us that went together tonight, were absolutely stunned as to how it was possible for just two blokes to make all that loud noise. You can see what we mean by listening/purchasing their ‘Reptiles’ track (which they performed tonight) on Bandcamp: https://sons3.bandcamp.com/releases or visit Soundcloud to here ‘Zealot’ (which they also played tonight) and ‘A Love Song’: https://soundcloud.com/sonsbanduk and for more info on the band: https://www.facebook.com/sonsbanduk 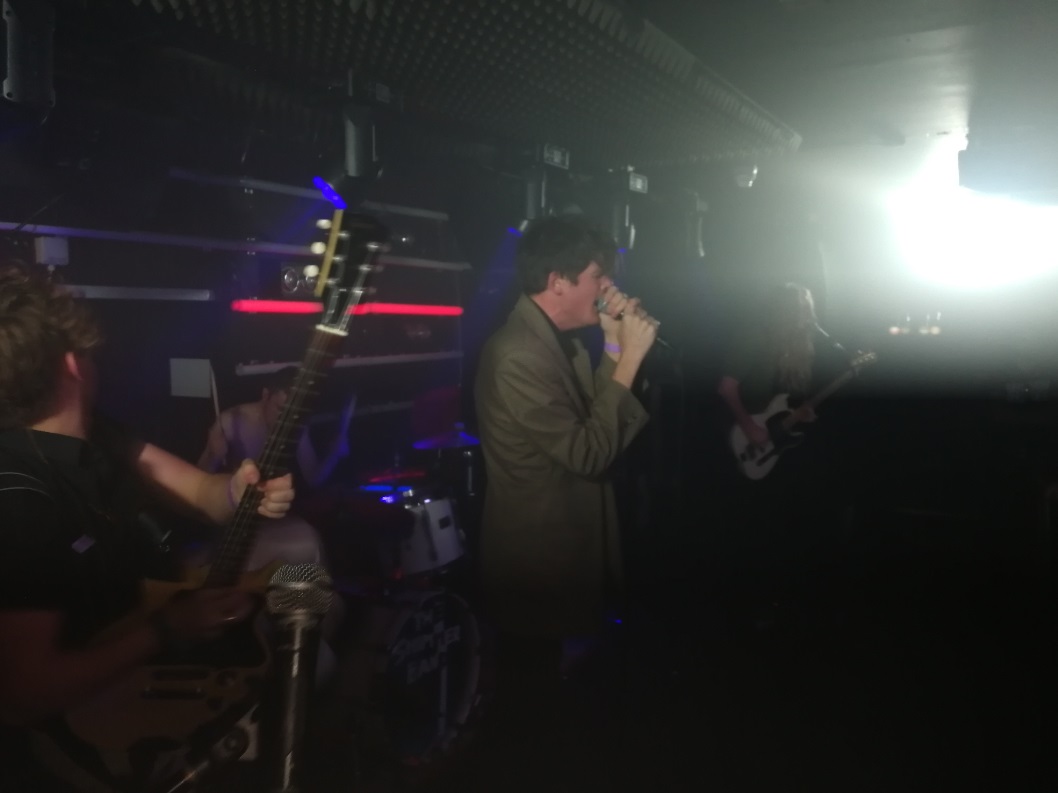 Next up were a punk rock band called BlackWaters, who are four young lads that apparently formed at University in Guildford three years ago (Blimey they don’t look old enough – Ed) . They play raw indie punk and cite their influences as including the Dead Kennedys, The Clash, The Ramones and Jonathan Richman & The Modern Lovers. This is perfect for me as I have been fortunate enough to have seen all of these artists.

I knew exactly what to expect tonight from these guys as I had seen them at this years Great Escape in Brighton and tonight they seriously nailed it! They were spectacular! I even had my arms tingling with excitement. In amongst tonight’s set, we were treated to ‘Let The Good Times Roll’, ‘Down’ and best of all the chant-like ‘F**k Yeah’. The singer at one stage wandered in amongst the crowd and then another member was hoisted high above fans heads whilst still playing – very rock’n’roll. I really need to see these guys live very soon! 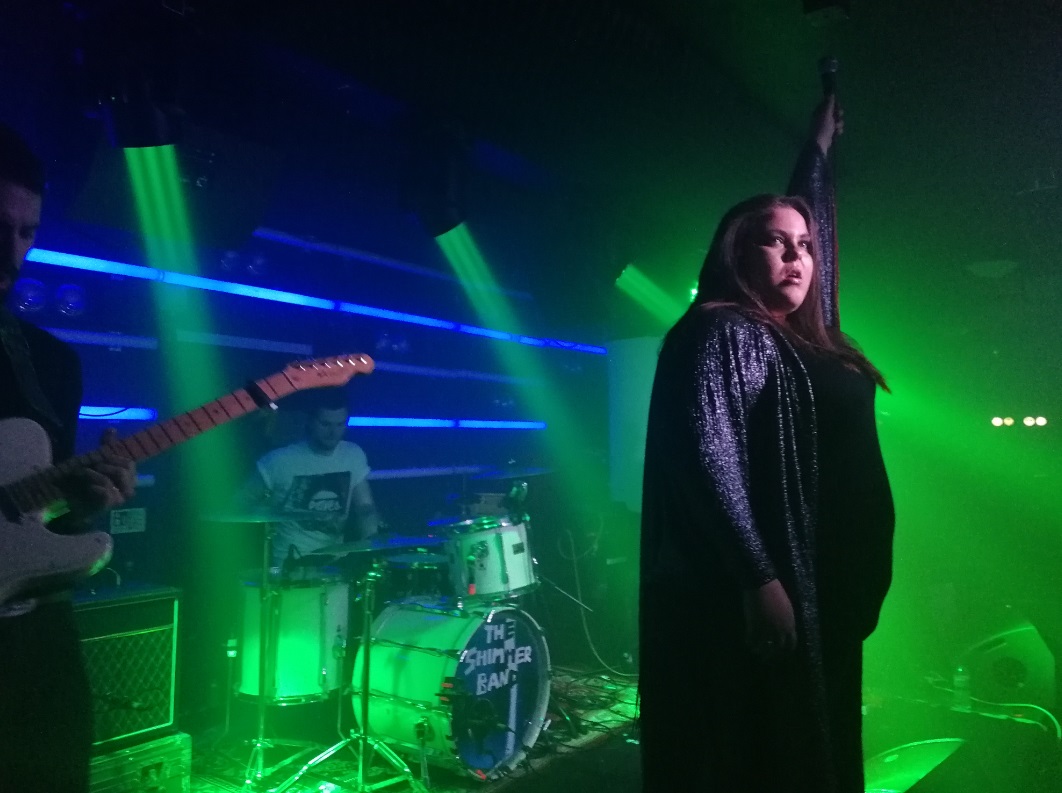 To be honest, I was still recovering from the awesome BlackWaters set and discussing what we had just witnessed with my mates and so we were rather engrossed when the next act Bang Bang Romeo took to the stage. We stopped talking, but singer Anastasia Walker of this rock combo from Doncaster was seriously giving me the eye, as in ‘enjoy it then’, but alas their hard-edged Fleetwood Mac style personally wasn’t for me, although one of my mates enjoyed it. You can decide for yourselves by listening/purchasing their material here: https://soundcloud.com/bangbangromeo and for more info on the band, click: https://www.bangbangromeo.com/ 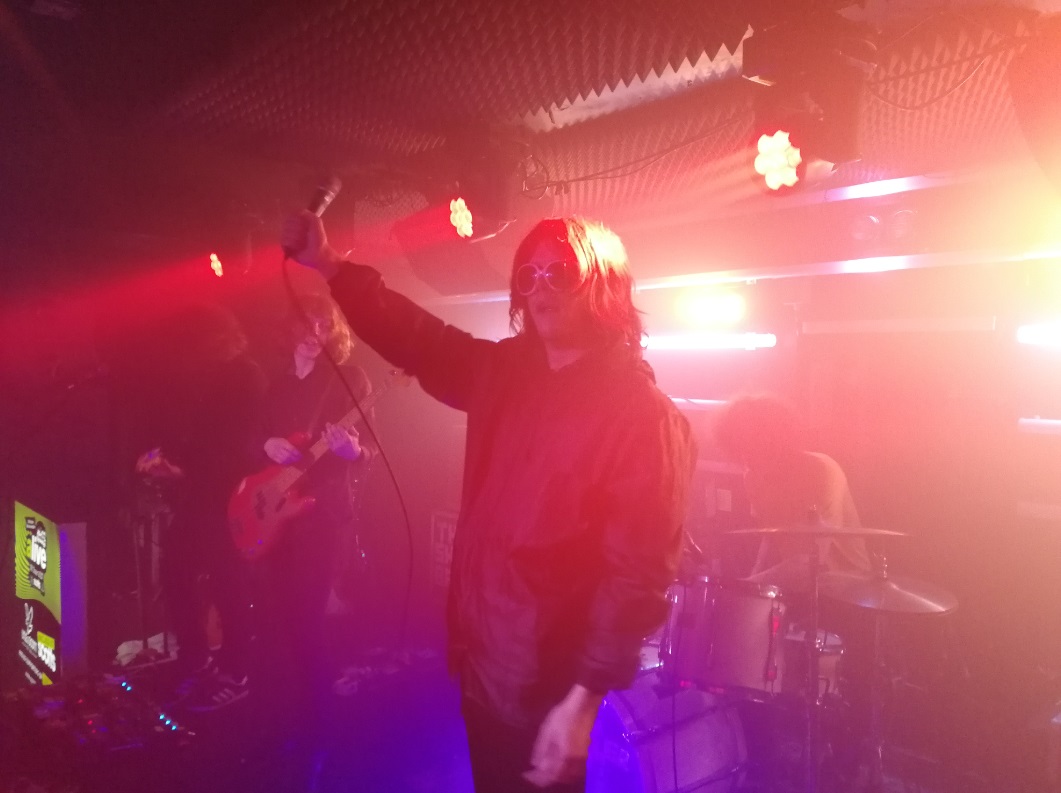 Headline act tonight were The Shimmer Band, who weren’t exactly what I had expected them to sound like. This five-piece came across as having the attitude and sound of the Gallagher brothers mixed with electronica-infused indie German Kraut-rock. I mean their guitar and synth player (yes there was a Dave Smith synth present tonight) is even called Schmidt. 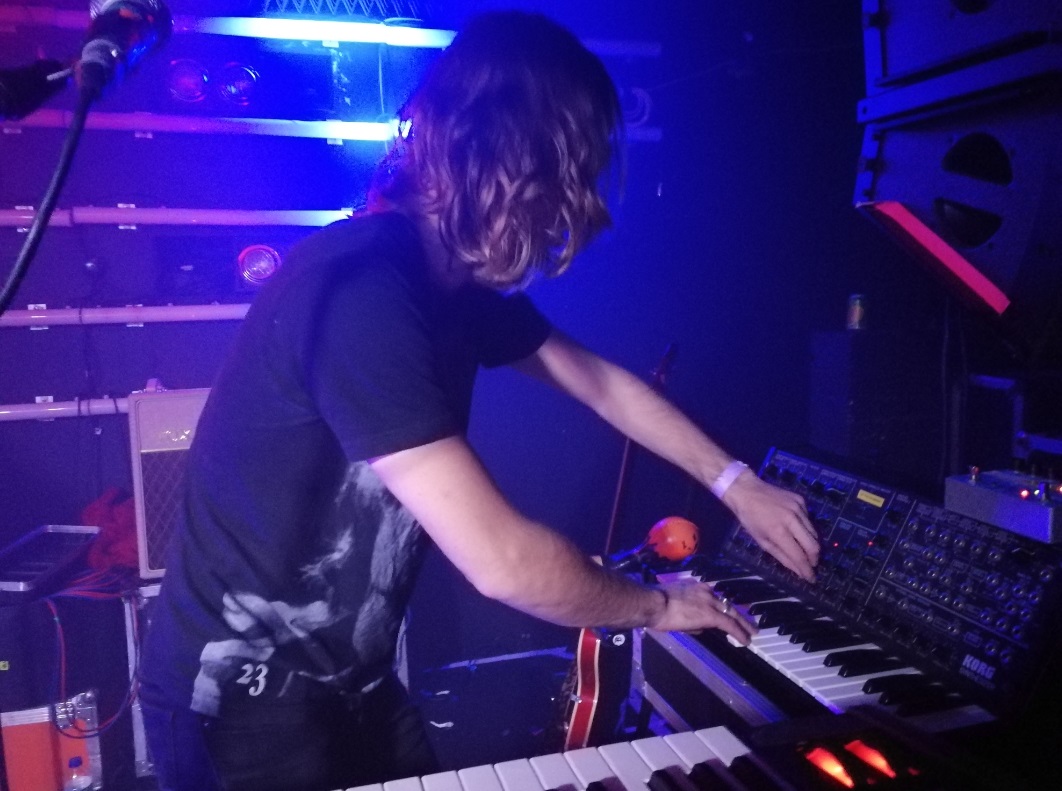 Schmidt of The Shimmer Band

Vocalist Tom Newman was loitering around the stage a la 1990’s Madchester geezer with large white specs on and a hooded raincoat, singing slightly long drawn out melodic Happy Monday’s style vocals. You can detect ingredients of Kasabian, Doves and The Horrors in their set, which included ‘What Is Mine’, ‘Jacknife & The Death Call’, Sunkick’, ‘Freedom’ and ‘Shoot Me (Baby)’. Have a listen here: https://itunes.apple.com/gb/album/ya-ya-uh-oh-single/id1290945516 and for more info on the band visit: http://www.theshimmerband.com/

Well done to the guys from ‘This Feelings’ for putting the show on. I wonder what delights you are going to unearth next year?