Fewer bikes being stolen in Brighton and Hove, say police

Fewer bikes are being stolen in Brighton and Hove, according to Sussex Police, who credited a sustained operation targeting thieves.

The force said: “A police operation to tackle bike thefts in Brighton and Hove is proving to be a success with the city hitting the lowest amount of reported stolen cycles in six months.

“Operation Ensnare was launched by Brighton and Hove police at the end of September in response to the rising number of bike thefts in the city.”

Sergeant James Ward said: “The overall decrease across the Brighton and Hove division in November for reported pedal cycle thefts was 48 per cent, which is positive.

“In the east Brighton area we saw a drop of 71 per cent.

“We have recovered dozens of stolen bikes and have been able to reunite some owners with their bikes.

“Recently we were able to give back a bike which had been bought by the owner’s late grandfather and had great sentimental value.

“He thought he would never see it again so he was delighted to have it back.”

Police have made several arrests during the operation. They detained five teenage boys, among others, on suspicion of stealing bikes. The boys have been released under investigation.

The recovered bikes are stored at Brighton Police Station in John Street.

Sergeant Ward said: “We are making inquiries to try to trace the bike owners.” 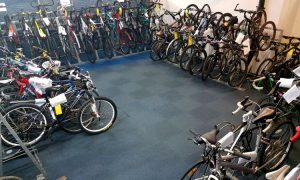 He urged anyone who had had a bike stolen to get in touch if they recognised it in the photo above.

And he said that the same applied to anyone who wanted to know if their stolen bike was among those recovered by police.