Suspect released by police after Maserati crash in Brighton

Police have arrested, interviewed and released a man from Hove suspected of driving a high-powered sports car when it crashed into two women and a shopfront in Brighton. 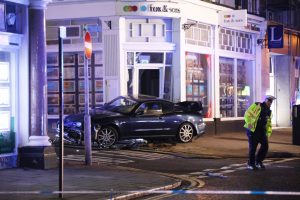 One of the women, a 25-year-old from Hove, suffered serious injuries when the blue Maserati 3200 hit her in Western Road, Brighton, on Wednesday evening (28 March).

Another pedestrian, a 34-year-old woman from Hove, suffered minor injuries.

Both women were taken for treatment to the Royal Sussex County Hospital in Brighton.

The driver was reported to have fled the scene after the Maserati flattened a “no entry” sign at the bottom of Borough Street and smashed into the front of the Western Road branch of Fox and Sons estate agency.

The cash happened at about 9.30pm on Wednesday just yards from another crash injured pedestrians on the other sid of Western Road at the top of Norfolk Square, Brighton.

After the earlier crash, on Friday 9 February, several injured pedestrians were taken to hospital.

The arrest of the 31-year-old man suspected of driving the Maserati was made on Thursday (29 March). He was released under investigation yesterday ((Friday 30 March).

Today (Saturday 31 March) Sussex Police said: “A man was arrested on suspicion of causing serious injury by dangerous driving and failing to stop after a collision after a car collided with two pedestrians and a shop.

“At about 9.30pm on Wednesday officers were called to the incident in Western Road involving a blue Maserati 3200 which crashed into the window of Fox and Sons.

“Both were taken to Royal Sussex County Hospital in Brighton for treatment.

“The 31-year-old was also detained for driving without insurance. He was interviewed and released under investigation.

“Police would like to thank the many witnesses who have already come forward and would like to speak to the rider of a motorcycle who was travelling east on Western Road and may have turned right down Bedford Place. They may have witnessed the incident.

“If you have any information, please report online or phone 101, quoting Operation Gunton.”