There was a big turnout for the open to mark 80 years of Preston Circus Fire Station in Brighton yesterday (Saturday 26 May). 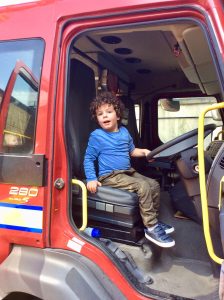 Youcef, 3, checks out a fire engine at Preston Circus, Brighton

Brighton and Hove mayor Dee Simson was among the guests, mixing with hundreds of local families and dozens of crew.

Councillor Simson found herself being rescued from a tower by firefighters using the aerial ladder platform.

The mayor also found herself being cut out of a car in a demonstration of what can happen when dealing with the aftermath of a crash.

Great to see @Woodingdean_Dee ..the Mayor of Brighton and Hove supporting @EastSussexFRS today and taking part …this was just before she went up on the Ladder platform this morning pic.twitter.com/grMQNFabK7

Some of Station Manager Tom Walby’s blue watch firefighters had to dash off to answer emergency calls although they turned out to be minor jobs or false alarms.

Back at the station, firefighters highlighted cooking safety and showed off equipment and – much in demand from the many children – the view from inside a fire engine cab.