Shilton, 68, turned out for the Best of British charity lunch which raised £36,500 for the Rockinghorse children’s charity.

The money will be used for a £120,000 project to fund a state-of-the-art real-time digital X-ray imaging facility to help treat premature babies at the Trevor Mann Baby Unit at the Royal Sussex County Hospital.

Rockinghorse said that Shilton, the former England goalkeeper, who won 125 caps, was the guest speaker at the Best of British 10th anniversary lunch. It took place at the Grand hotel on Friday (1 June).

The charity said: “He joined over 500 guests for a three-course lunch before taking centre stage to share tales from his colourful career, including stories from the world of international football and the infamous ‘hand of god’ moment in this World Cup year.

“Since its launch in 2008, the charity lunch has welcomed a variety of sporting stars over the years, who have entertained guests with humorous and poignant tales from their careers.

”In the last decade, over £450,000 has been raised through the Best of British Brighton lunches which have supported a variety of local Sussex charities and since 2013 the beneficiary charity has been Rockinghorse.

“Having celebrated its 50th anniversary last year, the children’s charity is best known as the official fundraising arm of the Royal Alexandra Children’s Hospital in Brighton and is also a vital supporter of the neighbouring Trevor Mann Baby Unit.

“This year’s sold-out event, sponsored by (telecoms firm) Overline, has raised £36,500 for Rockinghorse.

“Generous guests have helped the children’s charity reach its fundraising goal for their latest project at the Trevor Mann Baby Unit (TMBU).

“Having launched an appeal at Christmas, Rockinghorse aimed to raise £120,000 to fund a state-of-the-art real-time digital X-ray imaging facility to help treat premature babies on the Brighton-based unit, which they’ve now achieved.” 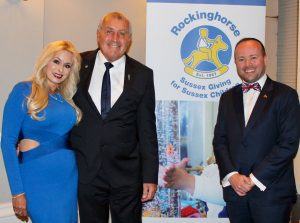 Peter Shilton and his wife Steph with Ryan Heal

Rockinghorse chief executive Ryan Heal, founder of the Best of British charity lunches, said: “It has been an honour to run these events over the years and we were delighted to welcome Peter Shilton to our 10th anniversary sporting lunch in Brighton – a true footballing legend.

“We have been overwhelmed by the generosity of our guests again this year, who have enabled us to achieve our TMBU appeal fundraising target.

“They have contributed to such an important cause which will help more premature babies in Sussex to lead a happy and healthy life.

“In my six years at Rockinghorse, I am regularly humbled and inspired by our supporters, many themselves having experienced the life-saving work of the Trevor Mann Baby Unit.

“Our thanks to everyone who has helped make a lasting difference by contributing to this appeal.”

To find out more about Rockinghorse and the work they do to support sick children in Sussex, visit www.rockinghorse.org.uk.