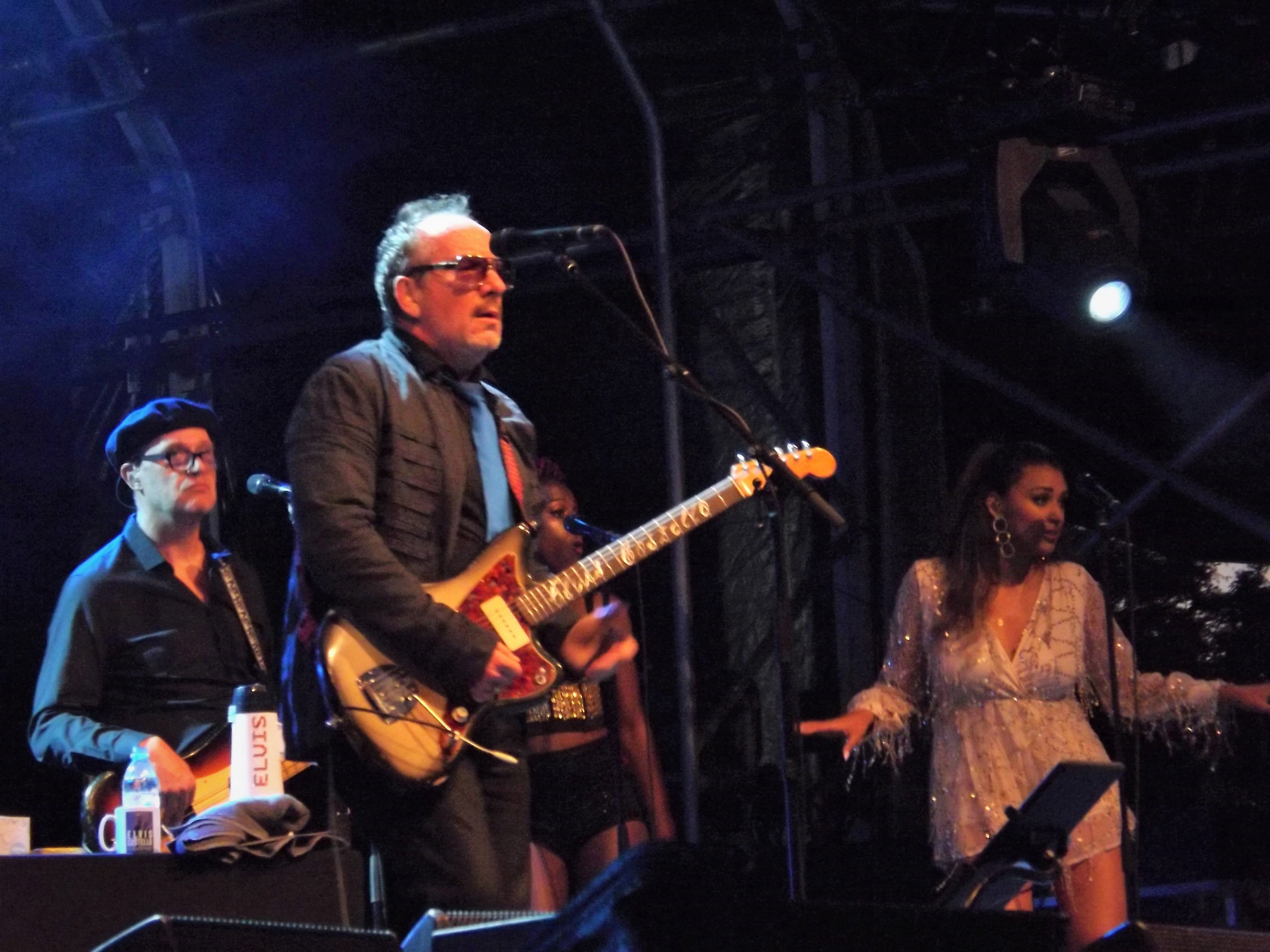 When arriving at Love Supreme at Glynde Place near Lewes, I could feel the energy. People were excited to set up camp and explore the festival grounds. 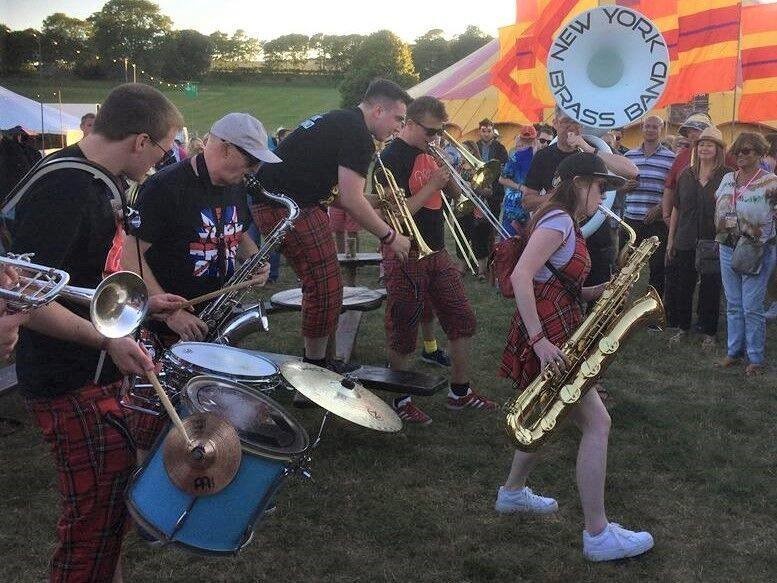 The first performance to see was the New York Brass Band who played standing on benches outside the Arena, playing classic Big Band jazz. “September” by Earth, Wind & Fire and “Better Get Hit In Your Soul” by Charles Mingus were two hits in their set that had the crowd dancing. The band managed to highlight each musician’s individual talents through solos and everyone was impressed with the sheer skill of the band.

Friday night was spent in the Blue in Green Bar, a ‘secret’ area hidden away near the main stage, where talented DJ Henry Wu performed. The bar was a better version of a nightclub with space to dance and a nice breeze to keep you cool under the gazebo. Wu’s set was comprised of funk or jazz music mixed with an electronic hip-hop beat, very different from the New York Brass Band earlier that day, but he made the two combined genres work.

Saturday morning was spent in the Arena where I caught the last few minutes of Fat Suit’s performance. After listening, I wish I had arrived half an hour earlier to see the whole set. It was obvious how passionate the band were about jazz music by the euphoric expressions on their faces. They are due to play at Edinburgh Jazz Festival on July 13th and BoomTown Festival on August 12th.

MF Robots took to the main stage at 12:30, giving a feel-good performance to an audience that seemed to grow as the set went on. The band is mainly comprised of lead singer Dawn Joseph, who has been a backing singer for Rod Stewart and Michael Buble in the past, and drummer Jan Kincaid. Joseph made it known that she appreciated the journey she took to be standing on that stage and thanked her band and audience. Even though the audience area surrounding the band was large, somehow she made the concert feel intimate.

Later in the day, Alfa Mist performed in the Arena at 14:30 with his band including a member on bass guitar, electric guitar, trumpet and piano. Each member of the band had incredible talent, the deep bassline was apparent throughout with higher melodic tones from piano, trumpet and piano. Unfortunately, I wasn’t actually excited by their set. The music seemed repetitive and their stage presence was lacking apart from Alfa, the pianist, who was the only member of the band to seriously shine through. Their performance seemed dull compared to Henry Wu or MF Robots.

Where Pathways Meet performed on the bandstand later in the afternoon playing smooth jazz that allowed the audience to sit on the grass and relax. It was a nice change to the usual standing and dancing, pushing to get as close as possible to the stage. The jazz was mixed with monophonic synths that gave the music an edge compared to other big band style jazz. Whether this edge is good or bad is undecided by me. Each performer was given a solo to show their skills, including a very skilled double bassist, Mutale Chashi, and a fast-paced drum solo that gained my attention by Sam Jones. Overall, a very talented set of individuals. 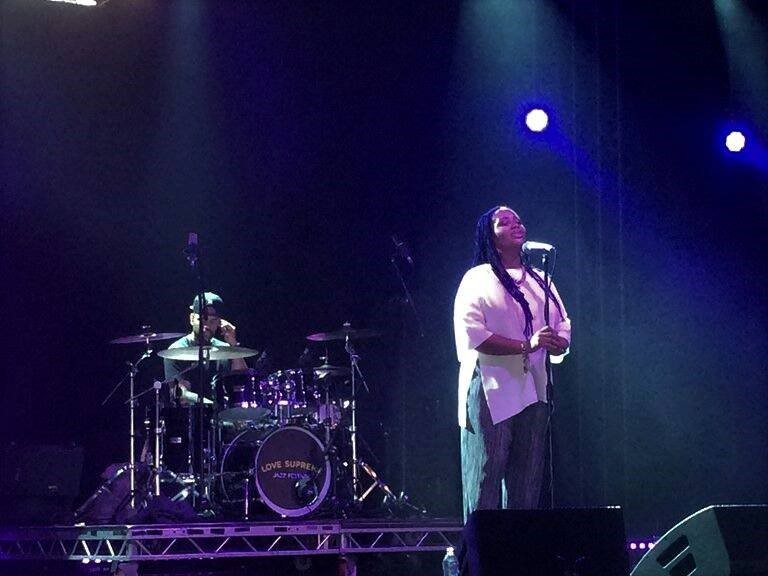 One person that I had heard of, but never seen, was Lalah Hathaway. Her skat was superb and she delivered an excellent performance in the Big Top stage. She is incredibly well known for her incredible talent to sing two notes at the same time by herself, which she did! The audience went wild in celebrating her unique skill. As she explains herself “Music is so textured and layered and it is an absolute entity in my life.” Her magnificent vocal range really drove the performance. I didn’t expect her to use a backing track in replacement of female backing singers. However, she did have a strong chemistry with the rest of the team she was performing with – guitar, drums and a DJ. She also performed her newly released song called ‘Honestly’. 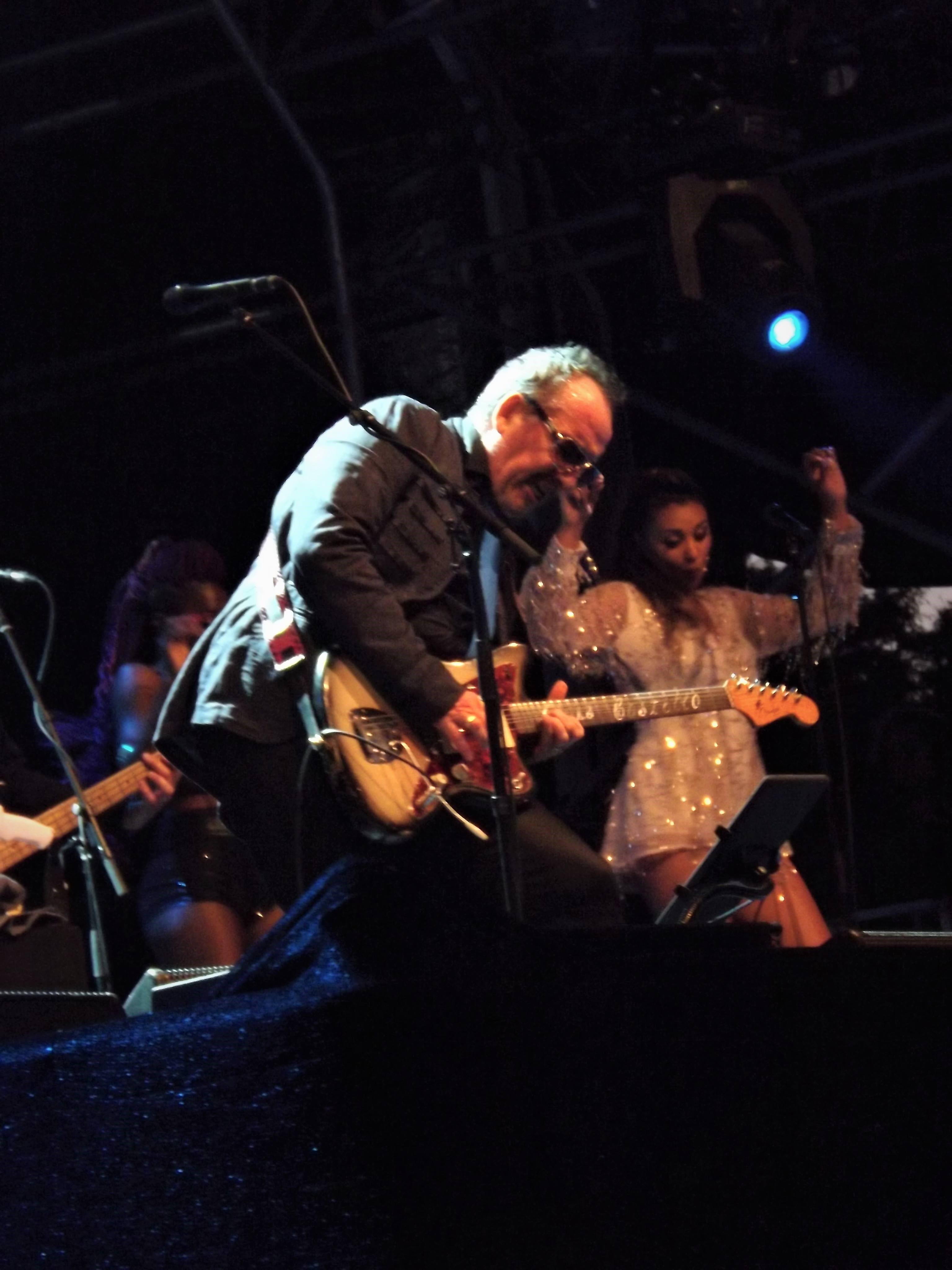 Elvis Costello & The Imposters was the act I was waiting for and they were definitely worth it. The band was composed of 2 backing singers, Kitten Kuroi and Briana Lee, a bassist, a pianist, a drummer and a guitarist that was Costello. The atmosphere was electric with the crowd on their feet, dancing to the music. His performance was wild, even using a megaphone to play his guitar at one point. The lively atmosphere had everyone smiling and there were good vibes across the audience – not a bad moment throughout.

Throughout the weekend, the Jazz Lounge featured multiple talks about jazz and included a documentary on John Coltrane on Sunday morning. It was interesting to delve into the personal life of Coltrane as well as what inspired him to become an artist. The Jazz Lounge provided information on artists and how to become one, which was a breath of fresh air you don’t usually get at festivals from the constant stream of music.

Later that day, music from Tom Misch could be heard from the Main Stage in the afternoon, a modern artist bringing funk back to young listeners. “I try so many genres that it’s hard sometimes to pinpoint. I guess my sound is uplifting, soulful, funky – and happy more than it is sad.” is how he rightly describes his music. Misch brought a fresh, new spin on jazz. 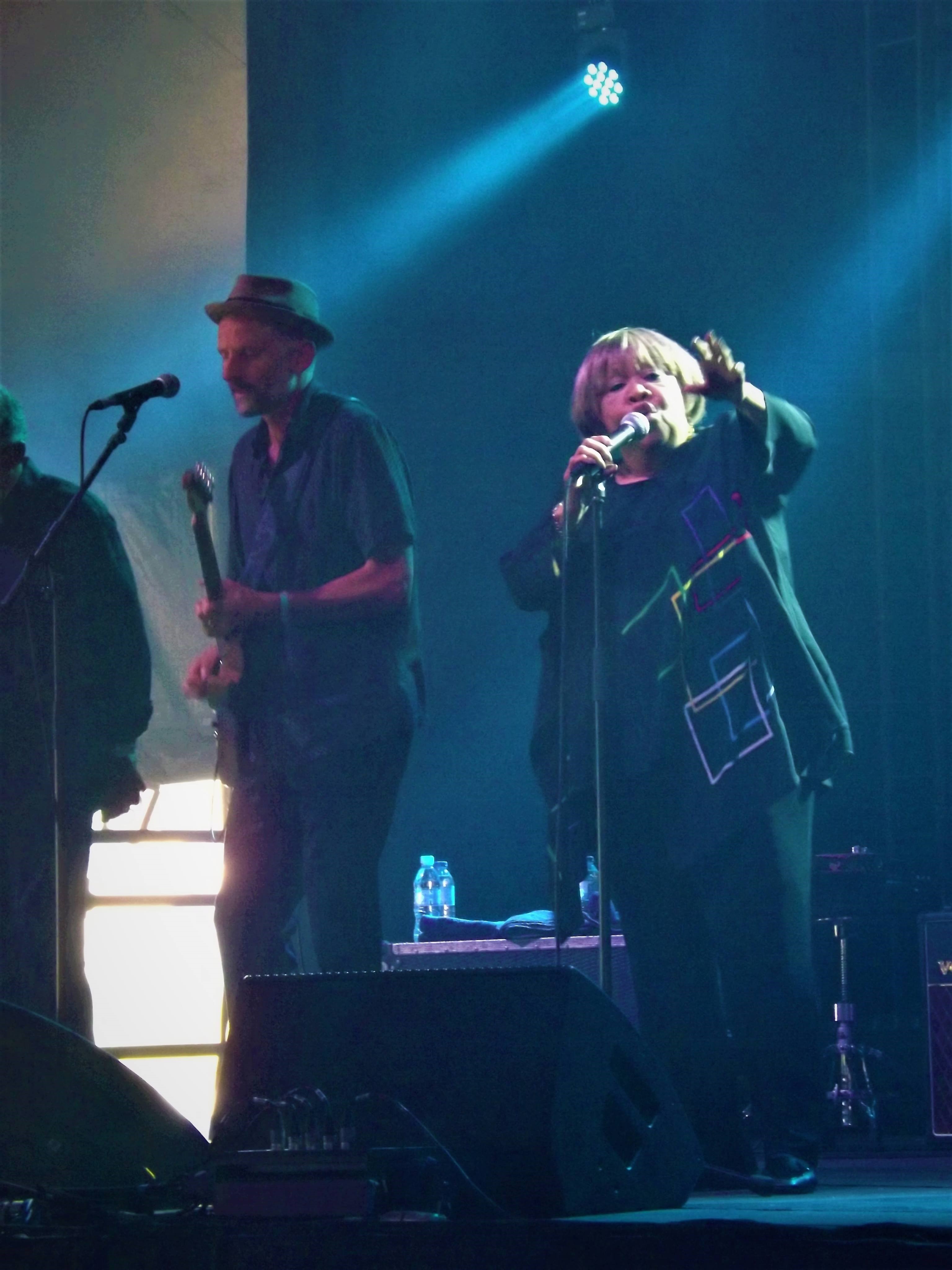 Mavis Staples, to me, was the highlight of the entire event. She was the most powerful performer I’d ever seen. There wasn’t a fault with her performance. It was chilling, my hair standing on end, as she spoke about ‘Freedom Highway’. “My father, papa Staples, wrote this song back in 1962 and he wrote it for the big march,” she began, speaking of the march from Selma to Montgomery. “I was there and I’m still here.” Staples was incredibly inspiring. The best thing about her was that all her songs were only about positivity. Every band member was enjoying what they were doing and it was obvious there was a strong connection between each member. It was a stage of smiles. 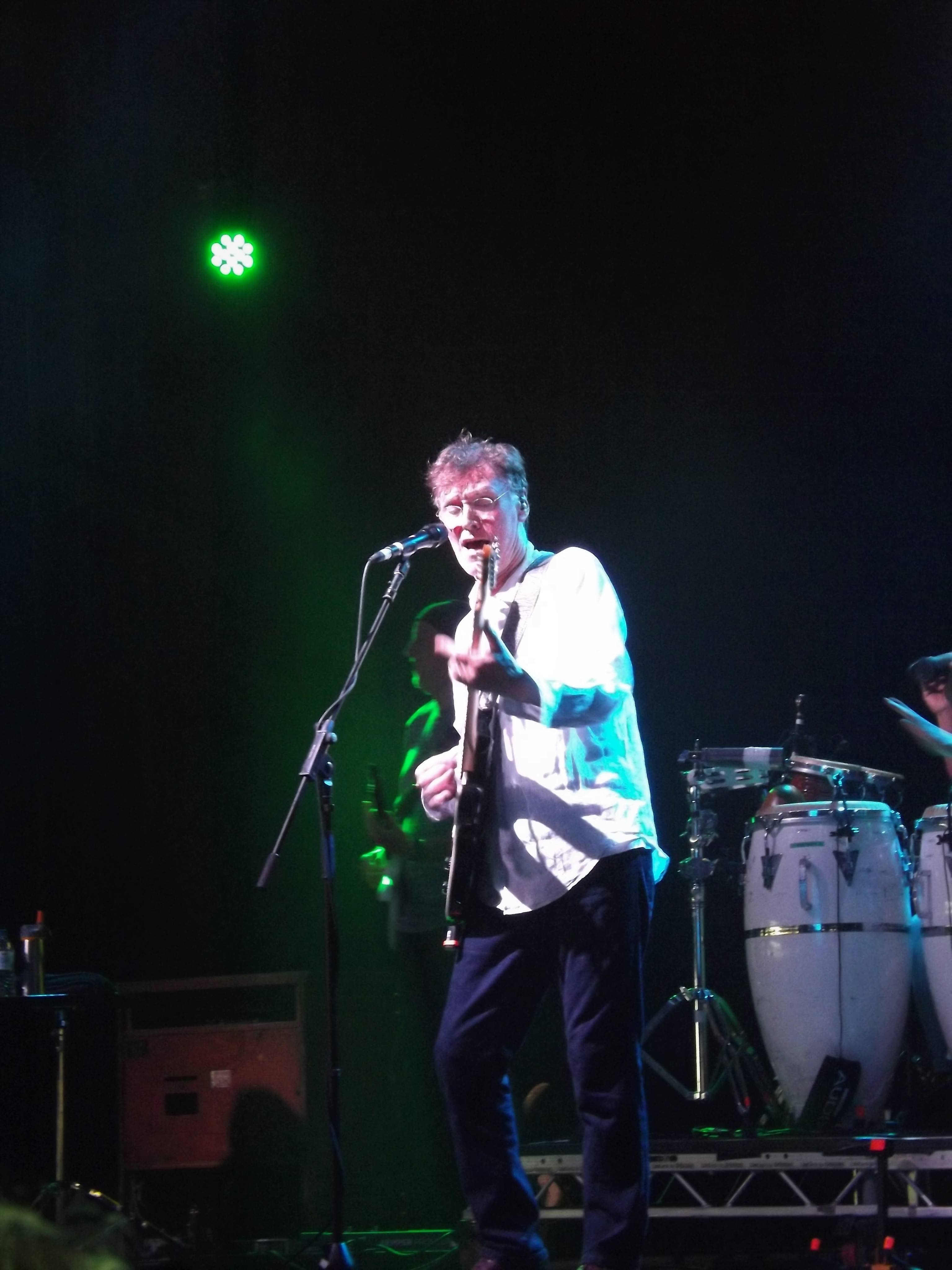 A few hours later, Steve Winwood played in the Big Top. Onstage was a pianist (Steve Winwood), guitarist, drummer and one talented member playing the bongos, guitar, saxophone and flute, a beautiful instrument that other acts didn’t include. There were many smooth transitions from smooth jazz to a Latin beat with incredible synchronization. To be honest, it was an honour to be within ten metres of the jazz legend that was Steve Winwood. 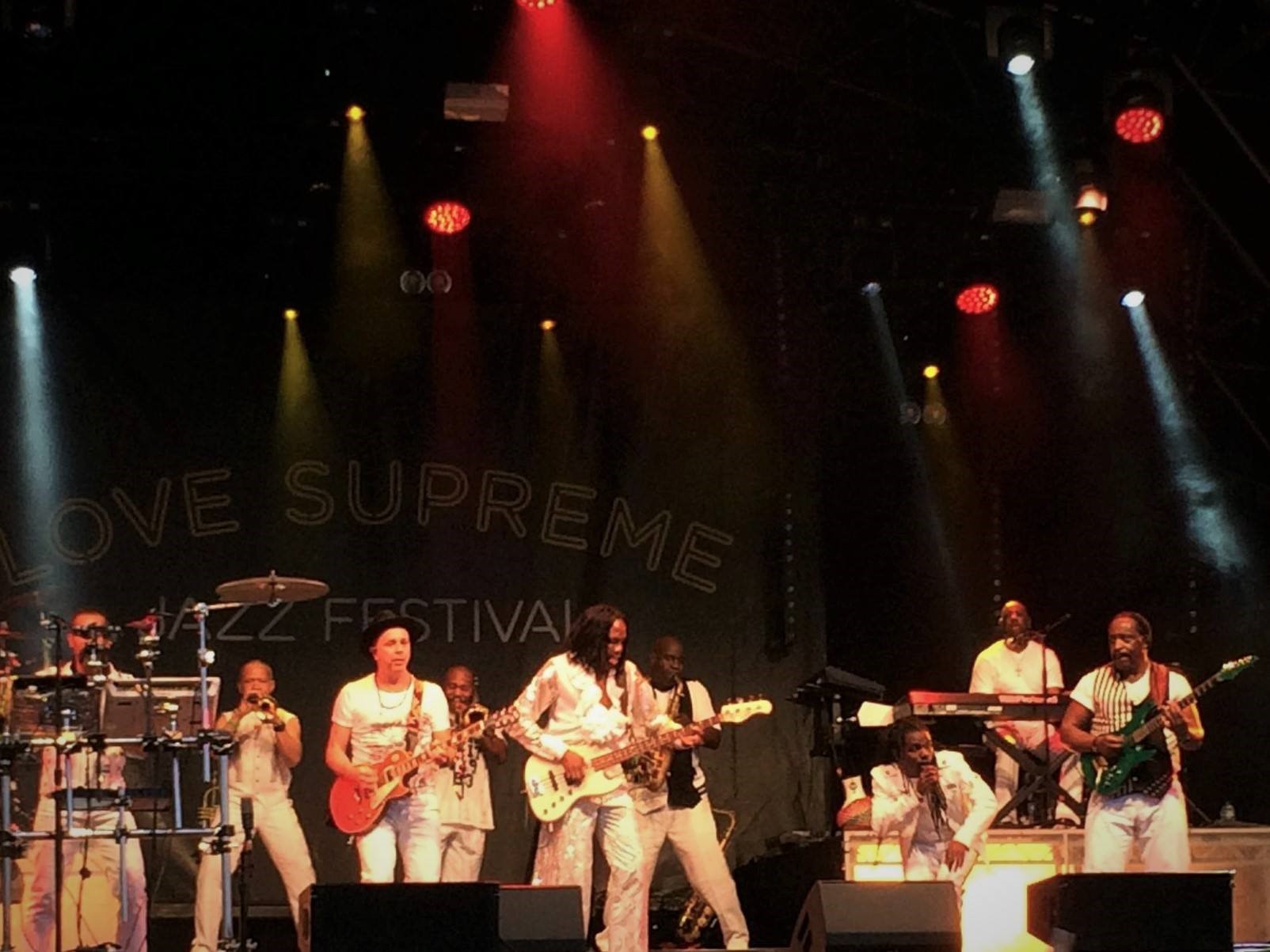 The final performance and most talked about event of the festival was Earth, Wind & Fire. The audience for the main stage was packed, waiting for half an hour in anticipation for the group to come on stage. Considering they have sold over 100 million records, 20 Grammy nominations and have a star on the Hollywood walk of fame, I was expecting them to be fantastic. And they were.

Everything from the lighting set up to the group dance coordination was amazing. People were picking up the lyrics to songs they didn’t know and shouting their hearts out to this band that was not only sucking the audience in but also back in time. The outfits the band wore were coloured white and silver that made me feel like I was being thrown back a few decades. However, the first 80 minutes of the concert led up to the hit song everybody wanted to hear – “September”. Everybody went wild. A vibrant, almost electric, feel quickly spread through the crowd until the end of the set. Earth, Wind and Fire was the second-best performance, following Mavis Staples’ spine-chilling set.

Love Supreme lived up to all the hype I had been listening to. It was no doubt one of the best festivals I had ever been to and I suspect that a majority of the 20,000 music lovers that attended the Jazz Festival would agree with me. I will definitely be owning a Love Supreme 2019 ticket as soon as possible. It’s taking place on 5th to 7th July 2019. 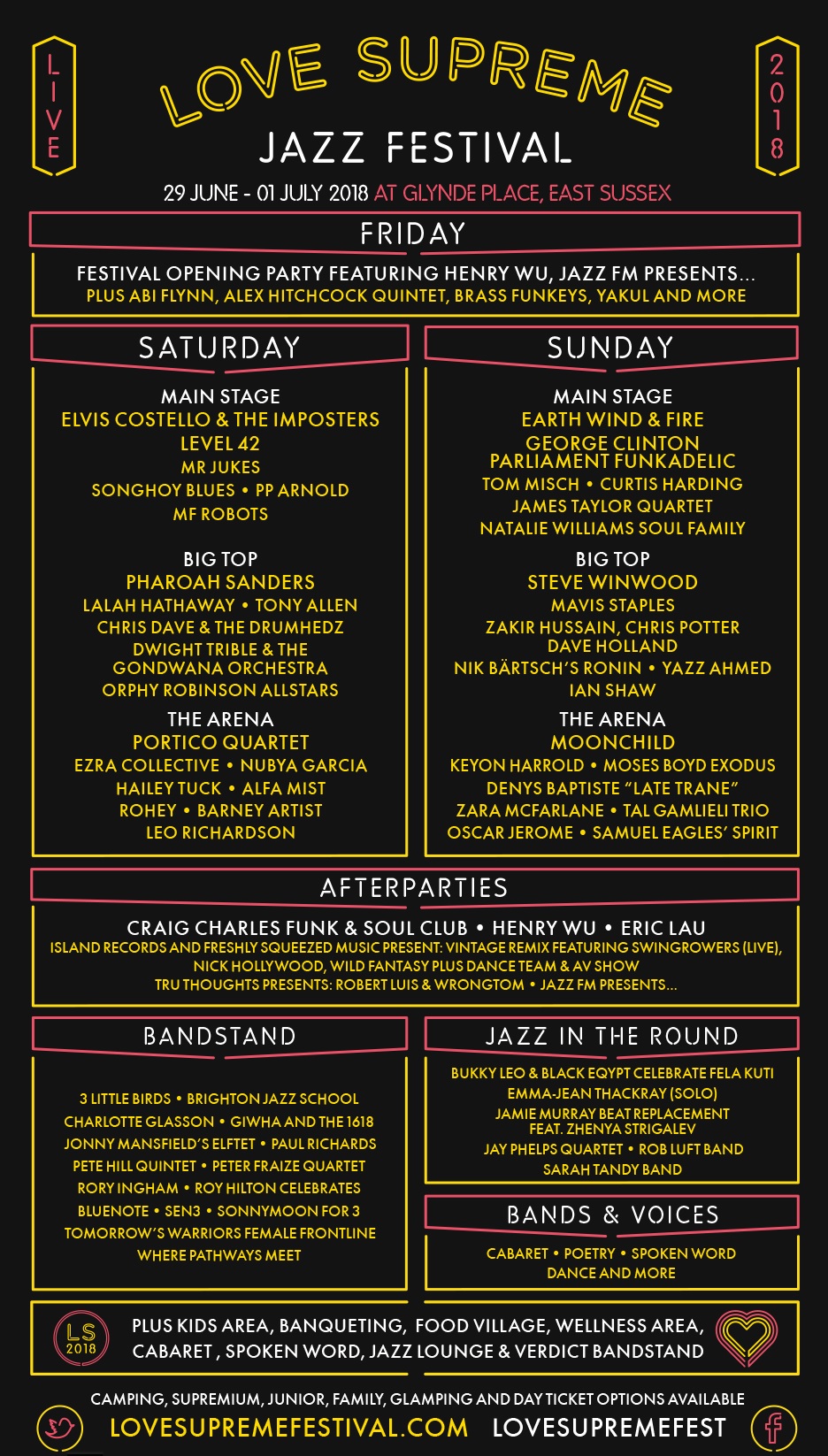