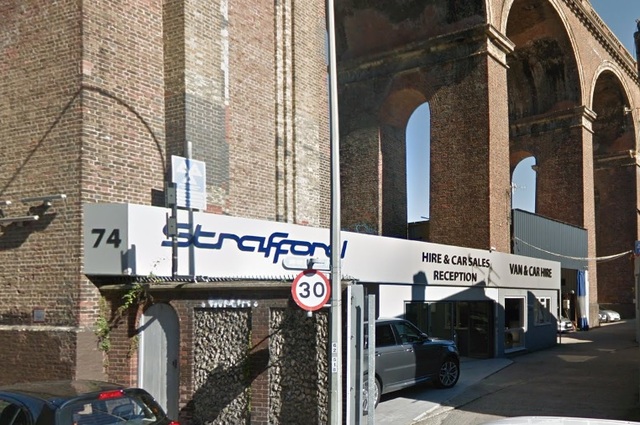 A car hire business in Brighton is bidding to open a cocktail bar for Pride weekend.

Strafford Car Hire in Preston Road has submitted a temporary event notice for a VIP cocktail bar, with live and recorded music, in front of its showroom.

It also wants to install a marquee on its land under the fourth arch of the viaduct as part of the licence for a ticketed event for 499 people.

In the application to sell alcohol and have music, the company states it wants to open the bar from 10am-2am on August 4 and 10am-midnight on August 5.

Sussex Police has objected to the application stating it warned the company’s agent it would object for a multitude of reasons.

In her letter of objection Sussex Police licensing and response inspector Di Lewis pointed out more than 300,000 people are expected to celebrate Pride as well as other events during the weekend.

She pointed out 55,000 people are expected in Preston Park on the Saturday and 20,000 for the LoveBN1 event on Sunday, which puts a strain on the emergency services.

Her letter to the licensing committee said: “Public safety could be put at risk with any form of obstruction or large congregation of people.

“Both within the event or for emergency services trying to pass by to attend a different location.

“This number of people would also require the oversight of police throughout the weekend which would add to already stretched resources.”

Environmental protection officer Mylene Hayward points out all businesses along the Pride parade route are asked not to play music to prevent people gathering and causing an obstruction.

She wrote: “There is concern that with the congregation of potentially up to 499 people and their noise and the volume of music this could have an impact on residents living in close proximity this event goes on past the hours of the Pride event in the park.”

An extensive supporting statement for business owner Stephen Strafford, states the company also plans to set up a respite and first aid station for Pride volunteers and stewards.

It states: “It is true to say that Mr Strafford has not previously engaged in the Pride festival. However, this event, he hopes, will be the first of many.

“Mr Strafford also wishes to support the staff and volunteers at this year’s event and to this end has included a separate rest area for Pride staff.”

Extensive details of security and safety measures for the site are included in the application.

The licensing panel discusses the application at Hove Town Hall at 10am on Monday, 16 July.