Three “inspirational” Brighton schoolgirls have raised more than £2,000 for a children’s cancer charity by having their long hair shaved off in assembly. 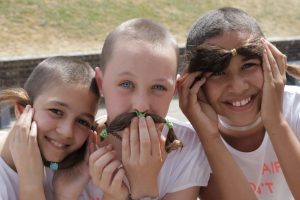 Year 7 students Lilia Dunn, Holly Holdsworth and Lola Rodericks are also donating their hair – cut off in front of their school friends this morning (Monday 9 July).

The Patcham High School pupils are handing over their locks to the Little Princess Trust. The charity provides free wigs for children who have lost their hair because they are undergoing chemotherapy.

The three 12-year-olds each have their own reason for taking part in the sponsored head shave on behalf of Bethany’s Wish, a charity that helps children with kidney cancer.

Lola is doing it in memory of a close friend who died from cancer on Lola’s ninth birthday. She said: “It was obviously very upsetting and when something like that happens to you it brings home the reality of those statistics you always hear on the news.” 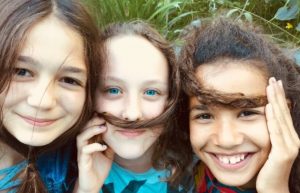 How they looked before – Holly Holdsworth, Lilia Dunn and Lola Rodericks

Lilia said she was inspired to get her locks shorn by the death of her grandmother from cancer when she was just three. She said: “She went through chemotherapy and lost her hair. I never really got to know her but my dad’s always talking about her and I wanted to do something similar for cancer.”

As for Holly she simply says she has always wanted to “do something nice for someone else”.

The girls have been amazed at how supportive their friends have been, with many telling them they are “an inspiration”.

They all had hair that fell well over their shoulders – and Lilia said that it was likely to take up to four years for hers to grow back to the length that it was before her buzz cut.

The staff from the Lads’ Mile, the barbers opposite the school gates, were on hand to make sure that their haircuts were short and sweet. 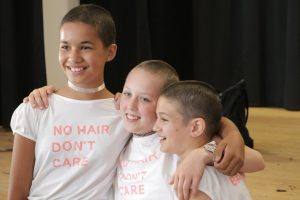 Afterwards, Holly said: “To begin with I think I’m going to be a bit nervous walking round school.”

Lilia said: “It felt like I was having a massage. It was really good. I’ve already have five people stroke my head.”

Lola added: “The weird thing is I can still see my parting”