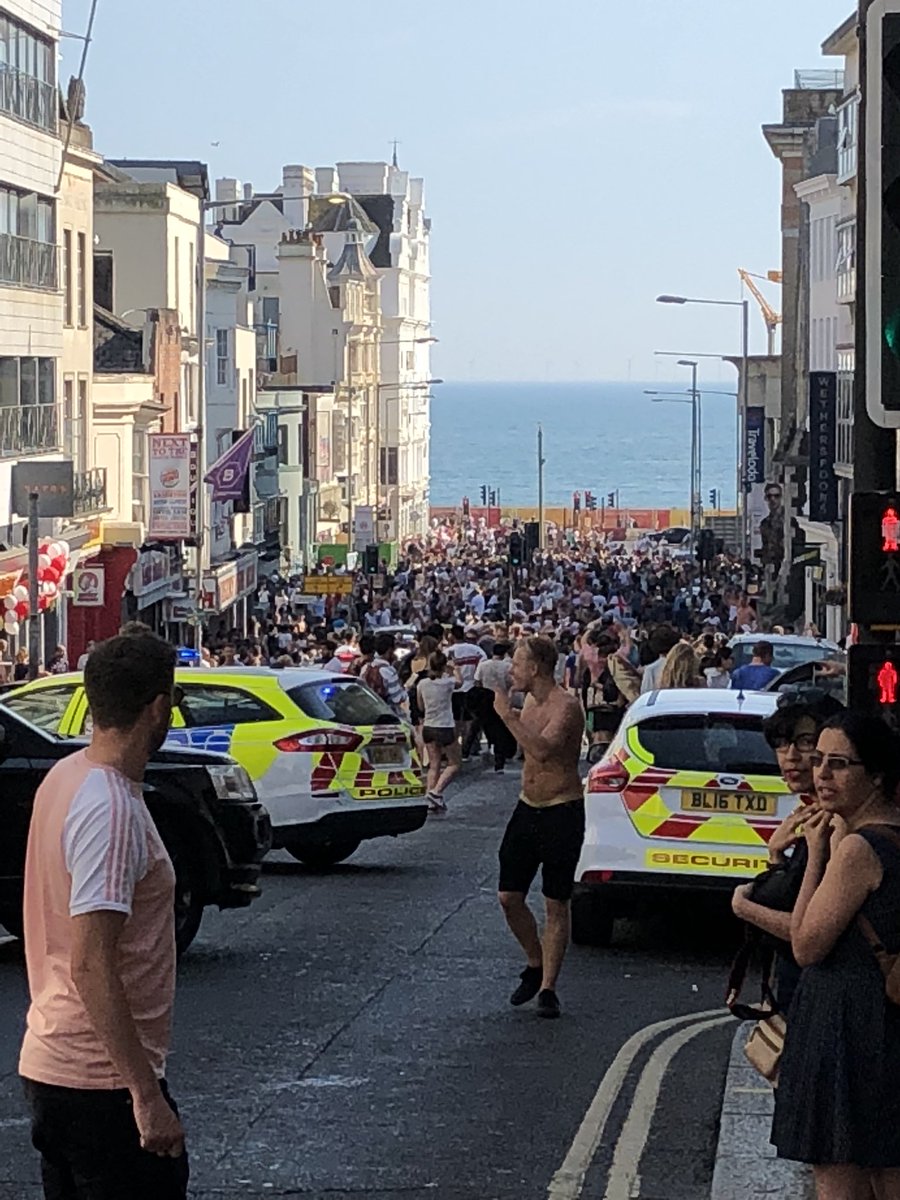 West Street at 5pm on Saturday by David Vincent

After the team’s victory on Saturday, fans pouring out of pubs in West Street temporarily blocked the road, and scuffles have been reported elsewhere, although police said there were no World Cup related arrests across the county.

Elsewhere in the country, fans have damaged ambulances, fallen through bus shelters and almost knocked down a little girl crossing the road while recklessly celebrating England’s progress.

In Eastbourne an over-excited fan climbed onto a police van as it moved slowly through a crowd of revellers blocking the passage of buses along Seaside. Fortunately, no one was hurt.

Sussex Assistant Chief Constable Steve Barry said: “We don’t want to dampen enthusiasm for what has been a remarkable tournament so far and we are encouraging everyone to enjoy England’s current success.

“Indeed, for many too young to remember England winning the World Cup in 1966, it is a unique experience and one they should certainly treasure.

“The majority of people do so sportingly, without resorting to anti-social or even criminal behaviour, and it is that which we wish to promote.”

Elsewhere in the country there has been some significant disorder and disruption. In many cases incidents have been alcohol-related.

“Numerous roads across the country were blocked stopping emergency vehicles getting to people in need and an ambulance is now off the road while being repaired. Shops were damaged, people were abused and assaulted and others climbed on buses and cars, causing damage to vehicles, and in some cases, themselves.”

He added: “This is in stark contrast to the fans out in Russia, whose behaviour, apart from a couple of minor incidents, has been great.”

In advance of the England’s semi-final match against Croatia on Wednesday July 11, DCC Roberts warned fans: “There is absolutely no excuse for this type of senseless behaviour.

ACC Barry, for Sussex and Surrey, said: “I can only echo that. If you’re heading out on Wednesday to watch England’s match against Croatia, have a great time, look out for each other but whether we win or lose remember to keep things within reason. That way everybody can enjoy themselves safely, without getting hurt or arrested.”

Additionally, while there is no intelligence to indicate an increased terrorist threat to World Cup screenings (or any other summer events), anyone attending a public screening is encouraged to follow some basic safety advice as part of the ‘Know the game plan’ supported by Former England stars Alan Shearer, David Seaman and Paul Parker:

• Arrive early and minimise what you carry. Fewer bag searches speed up entry in events.

• Be vigilant: If you see anything suspicious, tell a member of staff straight away.

• If you see anything which could pose an immediate threat to safety, all 999.

• In an emergency, listen to and follow public address instructions.

• If told to evacuate, do not wait around or film on your mobile phone.

• Move right away from the area quickly to allow emergency workers access. The new National Coordinator for Protect and Prepare Policing, Chief Superintendent Nick Aldworth, wants the public to know the game plan for better security.

Alan Shearer said: “Security is a team effort. If you’re going to see the game have a great time and look out for each other. Know your game plan and we can keep everyone safe.”

Fans can help us by watching these new videos to make themselves aware of the existing safety advice and to be ready to ACT if you spot suspicious behaviour and activity.